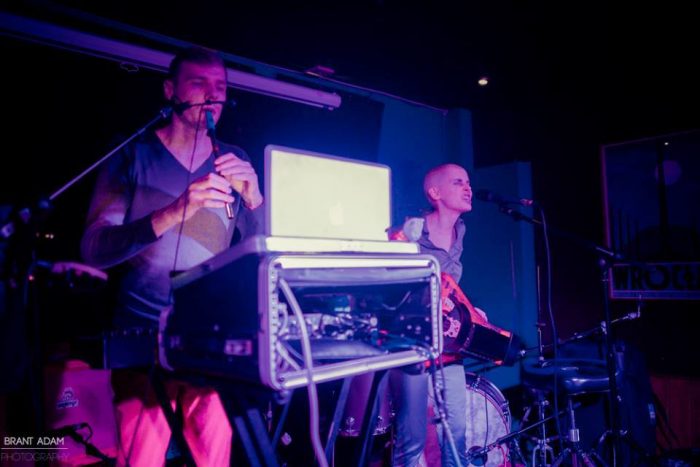 tAngerinecAt are a tantalizing duo who combine the unique sound of the hurdy gurdy with dramatic electronica and politically-powerful lyrics. Formed in Kyiv in 2008, they’ve been marking their territory in Manchester over recent months; with a number of intense performances.

Having changed their name from Dark Patrick in 2015, tAngerinecAt is composed of Eugene Purpurovsky and Paul Chilton. Their artistic output doesn’t just question boundaries, but shakes them. What you instantly notice is the call of the hurdy gurdy, an instrument almost like a whole other voice – haunting and passionate – permeating their sound. Played by Eugene, it bursts alive with a groaning, droning depth; as if the noise is scraped from the deepest corners of the human mind, experience.

Since 2008 they’ve released 4 albums, 1 EP and most recently 2 singles ‘Tangerine Cat’ and ‘I Don’t Want To Be a White Master’. In the latter, lyrics cry out about oppression‘ At three I learned what sex was, /at five – death, / at seven – fascism and violence, /at ten – poverty, labour and hunger’ – frank and unforgettable, this is a song which shouts out about personal experience of oppression. There’s the understanding that anyone can be or become an oppressor even if they don’t admit it consciously. It’s a call to de-construct all hierarchical institutions: “Power has no charm or delight for me. No regard, no solace for authority!”

Yet their anger is part of a wider artwork – as what I particularly admire about TAngerinecAt is the multiple textures of their tone: they aren’t just defined by protest. The vocals are almost acidic in their anger in the verses, yet the chorus ‘Power has no charm or delight for me’, has a tone of warmth to it: this is sound designed to be accessible.

‘Their artistic output doesn’t just question boundaries, but shapes them’

Why? tAngerinecAt care about the art of communication, not just music. This is sound which sheds layers and layers of voices as it is played (like a cat shedding its coat) – allowing the listener to engage with a number of different perspectives from this well-travelled pair, to learn, to reflect. Having already played to large crowds in Ukraine and Russia, they’ve brought their sound successfully to the UK.

They’ve been touring here every year and sometimes several times a year from 2012. This includes The New Adelphi Club in Hull 5 times with all their own solo gigs, The Night & Day in Manchester, Dulcimer Bar for Chorlton arts festival and what was the Roadhouse. I was lucky to catch them at a particularly productive time in Manchester; a gig at the Night & Day followed by an appearance at Valentine Records’ SOUND>VISION night.

‘Elevating them above their oppressors’

A blend of industrial (reminds me a little of Orbital) outpouring blends with the touchingly delicate, especially due to how they combine instruments. Paul’s use of the whistle, winds through the tracks like yet another voice, and when combined with the hurdy gurdy, seems to open up different levels of thinking. Their music is like cinematic snapshots, allowing you to make interpretations of your own and add your own plots…

They are completely committed to their music as full-time artists, regularly playing at festivals and drawing curious crowds. They create emotional movement amongst audiences which is not forced, but real and human; instantly elevating them above their oppressors. They share the love of the tAngerinecAt, an enigmatic figure revealed in their single of the same name and lines ‘The huge Tangerine cat majestically and calmly meanders through the snowdrifts/ His eyes reflect all the love of this world.’ Sometimes bold and bristling, at other points fleeting and feline, their music tells explores the concept of love, even at times of horror.

So many voices and versions of events –this is music by the people, for the people: identities becoming electric a little like Bowie’s soundscapes in ‘Low’. It is born out of passion, personally held instruments which become part of telling of themes of persecution, difference, isolation and identity. This is expressed through a powerful stage presence too.

‘Illustrate the battles which take place for human identity’

The strive for change is significant, and it’s evident too in the changes they’ve made within their music over time. Modern recordings seem to feature more of Eugene’s stunning vocals, though Paul still adds depth through his varied singing style. 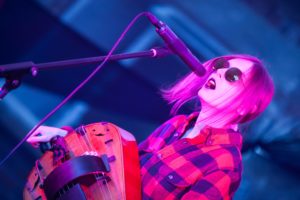 They use voices creatively, particularlynoticeable in the ‘H.R V.I.P’ album and the track ‘Mr Very Important Who Explains Everything’ which they often perform live. Here Eugene provides melody through soft reflection, almost idyllic at the beginning, though over the course of the track Paul voices a sinister-sounding persona, deep and dragging ‘I’m a high-ranking VIP don’t question me’. It is a criticism of patriarchy, of assumed cis male authority; satirised on stage by a tiny Rupert teddy bear. It shows how the pair can perform a song to illustrate the battles which take place for human identity.

Identity is explored in the most immersive way by tAngerinecAt; often autobiographical lyrics from Eugene which revisit a turbulent past. If you imagine thoughts as a series of strings – and then this music is the bow, sounding out self-reflection and turning the pegs of emotion; it will not be silenced. Powerful, personal lyrics – like how Eugene spells out ‘I became an atheist, feminist, anarchist’ – are paired with sound which swells through the speakers as if to enter your system, bringing a lump to your throat.

This is some of the most powerful music I have heard in long time, and holds a message too. We all can be oppressors in one way or another but our power lies in how we can change this, deconstruct it. Each of us has the capacity to turn the instrumental into something beautiful, to speak out against hatred, proven particularly by the latest single ‘I Don’t Want To Be a White Master’.

It’s about extending our experiences and sharing them rather than drawing a divider; and you can feel this flow through you, with the touch of the tAngerinecAt.

All words by Emily Oldfield, also on Twitter as @EmilyvOldfield and has a website. Photos by Brant Adam.