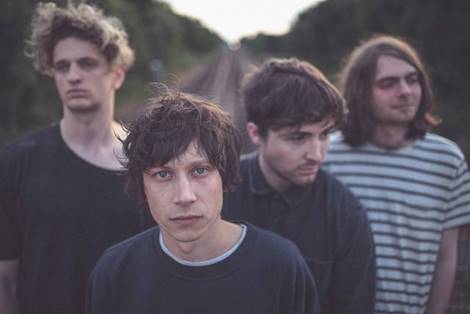 Though October Drift’s Stranger Days EP was a record steeped in angst and musical aggression, it harboured a distinct energy and atmosphere that lifted it head and shoulders above their UK contemporaries. For their second EP, the recently announced This Is Nowhere, it seems that trademark atmosphere has been streamlined, the essence of the band distilled in to something more pure.

It comes at a time when October Drift appear their most driven and determined yet. A band with their sights set on a bright future and who know how to go about getting there. The first single to be taken from EP, Cinnamon Girl, is arguable the band at their crispest and most succinct; ironic given that the track was born from that hazy, half-awake state in which, according to singer Kiran Roy, “your thoughts can wander to some really strange places.”

He goes on to say about the video: “we were a bit apprehensive about doing a live video because we didn’t want to give everything away about our performance, we want people to experience that at a show. Though because we’d worked with James before, we went with it. He kept saying ‘it’s not just gonna look like a band performing in the woods’, which seemed completely mental because that’s exactly what we were doing, but he clearly had a vision that we didn’t have.”

You can check out the video below:

This Is Nowhere will be released on October 7th and can be pre-ordered here. The band are also heading out on tour in support of the record on October 1st. You can find a full list of tour dates below.