Home Music Bands Watch This! New video from Liverpool’s The Room In The Wood 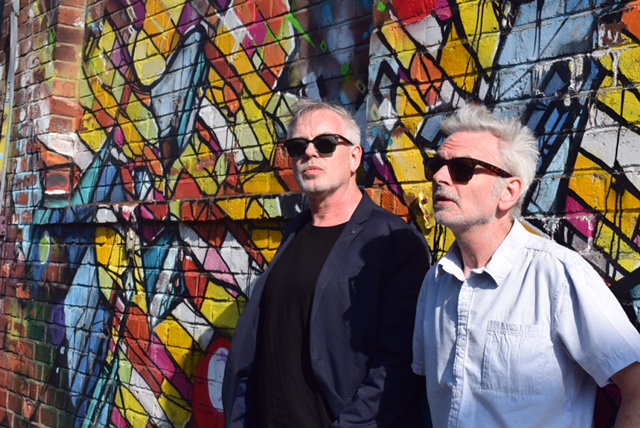 Liverpool’s The Room in the Wood have just released the video for Greedy Stars, the second single off the new eponymous album, recorded with Steve Powell (Michael Head and the Red Elastic Band) at his Liverpool Arc studio, this album features contributions by drummers Colin George Lamont (Mark Lanegan, Dave Gahan) and Jake Woodward (Peter Perrett).

This is the first time band members Paul Cavanagh and Dave Jackson have worked together since their post-punk band The Room split back in 1985. Reunited under the moniker The Room in the Wood, this past year has seen them write over 30 new songs. Together with collaborator and ace drummer Colin George Lamont, they developed and honed these ideas down to the tracks they are now presenting.

Dave Jackson has been writing and recording since his teens as part of The Room, 051, Benny Profane, Dust, Dead Cowboys, as Dave Jackson and The Cathedral Mountaineers, and under his own name with former Shack guitarist John Head. He has recorded and released 10 albums with these various incarnations and notched up seven John Peel sessions with The Room and Benny Profane in the 80s, in addition to appearing on the Whistle Test, Janice Long and Saturday Live.

Jackson has also toured extensively in the UK, Europe and the USA with bands such as The Fall, The Violent Femmes, Aztec Camera, The Lemonheads and The Wedding Present. He currently teaches creative writing at Liverpool John Moores University, having developed his novel Violet City as a low-budget fantasy feature film.

Guitarist Paul Cavanagh has played with Chinese Religion, The Balcony, Ludus, The Room, Top, It’s Immaterial, Gloss and Moongoose. He has performed as a solo instrumentalist as Cabin in the Woods and as one of Mike Badger’s Shady Trio. He worked with The Room drummer Alan Wills at Deltasonic Records with The Coral and The Zutons. Paul has also recorded four John Peel sessions and released albums with The Room, Top, It’s Immaterial, Moongoose, as well as critically acclaimed singles with Gloss.

Greedy Stars is a brilliant offering, loaded with optimism and wit. This lush and highly memorable track is not only easy-going, but calls to mind other local bands like The Railway Children and Echo & The Bunnymen. Upbeat with very effective multiple gospel-type backing vocals, this music gives every indication of a band that is going places. The accompanying video mixes footage of frontman Dave Jackson with retro film excerpts, demonstrating the behaviour of what can only be interpreted as hungry (film) stars.

In terms of the album as a whole, this music ought to appeal to die-hard fans of The Room, The Fall, Nick Cave, Tindersticks, Bill Calahan, Beck, Fleet Foxes, The Doors (for Dragonfly), and Bert Jansch. The album is being released via boutique label A Turntable Friend Records on limited gatefold sleeve vinyl as an 11-track offering, the CD and digital versions will include Vermillion Sands as a bonus track.

The Room in The Wood’s debut album is now available digitally via various stores, streaming platforms and Bandcamp. If you are in Liverpool on Thursday, July 26, catch The Room in the Wood performing tracks from their debut album at 81 Renshaw Street.