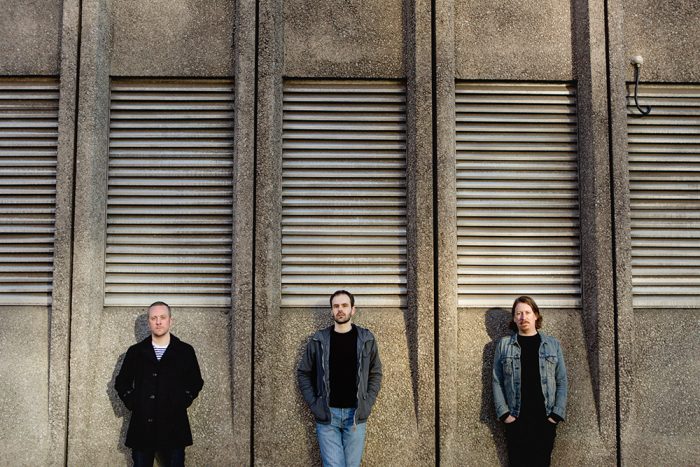 We are excited to report the return of Manchester’s melancholic walker of the dark sadie The Longcut.The band have been off the scene for far too long but they have returned with a thrilling new track and new of a new album released 6th April 2018 on Deltasonic plus a couple of live dates…

Somewhere between utopia and dystopia The Longcut have constructed their own monolithic world. Impossible to place but undoubtedly familiar, on their new record Arrows, Manchester’s sonic architects have carved out their own Upside Down within the crevices of the North; sublimely sweet, bittersweet and bleak, where concrete blockades loom large, but songbirds emerge from clouds overhead.

“Much of Arrows was born out of frustration with the whole process,” reveals the band’s vocalist and drummer, Stuart Ogilvie of the album’s brutal leanings. “Like even when you know good things are happening in your life, other situations can get you down. That balance or imbalance is felt by everyone so hopefully people can hear this journey and relate.”

7 years in the works but much less time in the making, several cuts of each song and two versions of the album later, Arrows embodies aggravation. Sliced, diced and layered up again for the 21st Century, Arrows shows strength from struggle through its stark contrasts; “We were going to call it ‘Monuments’ because of this process of chipping away and adding things,” tells bassist, Jon Fearon. “Eventually we settled on ‘Arrows’; it’d be easy to read too much into it but really, it’s about people. ‘Arrows’ was also the track that pushed us to finish the record, even when it was tough.”

Chiselled from chopped up loops, original demos, welding together long improvisations then building, re-recording and fine-tuning, Arrows captures many moments in time. Not least, the whisky-fuelled home recording sessions where kitchen shelves were rearranged to re-amp bass parts at full volume and bedrooms were transformed into control rooms strewn with amps and microphones. It may have taken its time, but throughout the record’s walls of sound, tortured beauty lies within; “You can go from nothing to something very quickly when you eventually get going,” says guitarist, Lee Gale.

Behemoth of a lead single ‘Deathmask’ is the perfect case in point. Energetic, menacing and mesmerising, the words came together very quickly. “I was walking home in a pretty shitty mood and this really ominous weather front came over,” recalls Stuart. “The sky went dark and there was this static electric feeling in the air, powerful and foreboding. That’s where the line “Under the gathering sulphur” comes from. It got me thinking about escapism; not to some sunny uplands, but to a place where the natural order was breaking down too.”

Weaving in and out of apocalyptic swells of visceral white noise and razor-sharp riffs from guitar strings sawn with a drum-stick, as Stuart proclaims on ‘Kroqd’ “Ashes are falling from the sky and I’ll keep singing,” the tour de force of the record is in the astute voyeurism of the lyrics. “It’s taken time to write because so much has happened,” he hints. “Reflecting life and what happens to people rather than dwell in self-deprecating misery… I try to take my feelings of those and abstract them; it’s that idea of something ongoing being constantly re-evaluated, which can account for a lot of the record’s ambiguities and contradictions.”

Elsewhere the trio’s hefty homage to the basslines of beatmakers J Dilla and Flying Lotus’ ‘LTWXRMX’ which samples the 1950s IBM advert soundbites of Raymond Scott’s track ‘Lightworks’ also threw up a few creative demons. “We had this mad loop of Scott’s stuff for ‘Punches’, all these arpeggiated sounds before realising we had to completely re-do the track because those samples were copyrighted,” tells Jon. “Clearly no artistic endeavour will go unpunished.”

Whilst previous albums A Call and Response (2006) Open Hearts (2009), and 7-track EP Broken Hearts (2010) were formulaic in structure, Arrows was formed from the rolling approach of no clearly-defined beginning, middle or end. Through its single-word titles which stack upon each other like steel girders, order is brought to the recordings, mixed by studio boffin and The Earlies live guitarist/multi-instrumentalist Tom Knott, who provided ‘Popic’s live brass sounds. “He transformed our sprawling recordings into a coherent whole and his contribution is one of our favourite parts,” Jon says. Meanwhile on the sleeve, Arrows takes its shape with angular artwork created by long-time artistic collaborator Liam Palmer.

Raw, brutal, pounding the senses and always from the heart, The Longcut are ready to launch Arrows into 2018’s bleak and beautiful horizon.