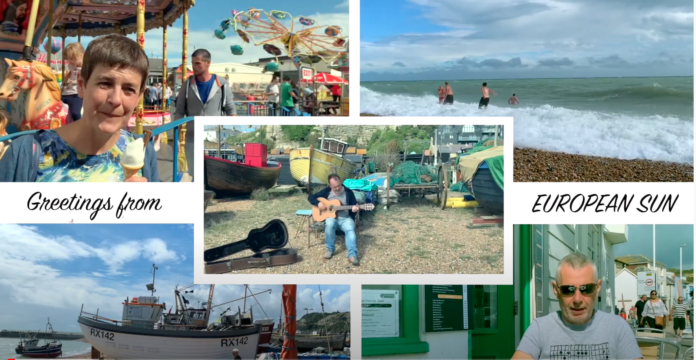 A classic piece of whimsical English indie pop from some of the key architects of the scene. It drips melody, whimsy and love and a lone grey cloud on a rare and perfect blue English sky…great video as well…

Favourite Day is released in time for the August Bank Holiday weekend; a paean to Lou Reed, a kitchen sink indiepop retelling of Perfect Day, with melting ice creams, sandy Pringles and a verse that feels like it was written in another world:

Far too noisy in the club
Far too crowded in the pub
Way too cold to stay outside
Walked her home and went inside
But that’s when they both knew
That it’s a perfect day, it’s true
When you both sing along with Lou

Their self titled debut LP hits the shops in September

Pressed on beautiful white vinyl, inside a gorgeous sleeve that marries Warhol and Saville to sumptuous effect, the album brings you 12 songs about birds, belonging and Brexit, growing up, growing old and going to the seaside, looking back, looking forward and looking bewildered, dreaming, driving and despairing, and many more moments of frivolous profundity, all packaged inside conveniently-sized pop songs for your enjoyment and consumption.

Digital extras supplement the deal and the whole thing is guaranteed to bring a smile and a sense of balance to a world with too much anxiety and uncertainty.

The band’s first release, The Future’s Female, was a straightforward song for the new decade, a rallying cry for progressive people to have hope in a decade that threatens to be dark. The proceeds from all Bandcamp sales are being donated to Refuge. You can also donate here – https://www.justgiving.com/fundraisin…

My Station was the second digital release, written and recorded in a simpler time, about travel, forgetfulness and childhood. ‘Always check the luggage rack.’

The band’s third single, and first to be taken from the vinyl release, is My Friend Robin, wherein European Sun befriend a Look & Learn annual worth of heroes:Robin Hood, Prince Hamlet, Vincent Van Gogh, Emmeline Pankhurst and Robert Johnson.