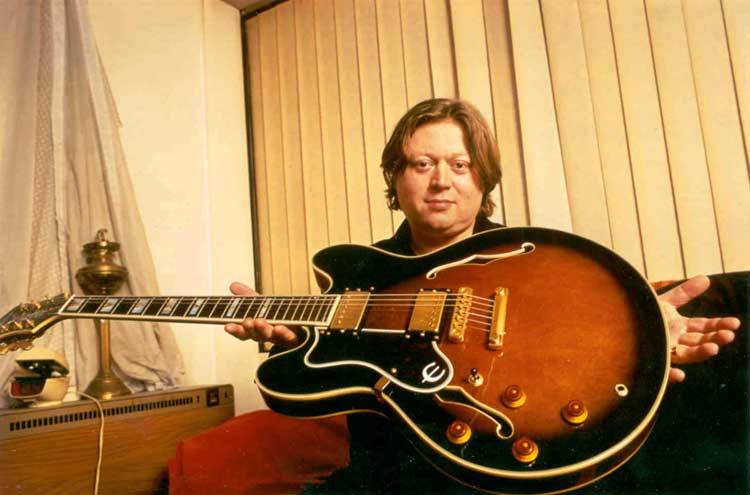 Walking In the Opposite Direction: Adrian Borland & The Sound

WALKING IN THE OPPOSITE DIRECTION is a feature documentary film about the tragic struggle of post-punk singer and songwriter Adrian Borland and his band The Sound. The documentary will have its UK premiere at the ICA on April 26th 2017, marking the 18th anniversary of Adrian’s passing.

Walking in the Opposite Direction
A Marc Waltman film
This is a tale of headstrong musical talent and dark despair ending in tragedy. English singer-songwriter Adrian Borland, whose poetic lyrics, passionate vocals and compelling guitar work fueled the critically lauded post-punk band The Sound battled mental illness for years before finally taking his own life in 1999. While peers Echo and the Bunnymen and The Cure blazed ahead in album sales, The Sound struggled to find wide-spread appreciation, despite achieving critical acclaim for 1981’s sophomore effort From The Lions Mouth. As Melody Maker’s Steve Sutherland put it at the time: “Lions Mouth could be the end of the line for me and ‘rock’ records – it’s that good.”
This haunting documentary, by turns troubling and tender, was made in the Netherlands where Borland found his greatest acclaim. Directed by Dutch director, writer and producer Marc Waltman in his first feature outing, the project was driven by longtime fan Jean-Paul van Mierlo, who was inspired by the music documentary Searching for Sugarman to produce a homage to the Wimbledon-born Borland.
Combining performance footage, photos and interviews with the insights of those who loved and knew him best, including friends, partners, musical collaborators and his father Bob, a constant support in his career from his early punk band The Outsiders to his final solo recordings, the film captures both the exhilaration and charisma of Borland’s talent and live performances, and the black dread that followed him. Unflinchingly honest about his battles with alcohol and schizoaffective disorder, intermittent hospitalisation and episodes of violent anger, Walking In The Opposite Direction turns a humane, reflective eye on his determination to make music in the face of limited commercial success, while dogged by personal demons. In Borland’s ultimate decision to abandon the medication that stifled his creativity, we see him follow his muse even at the cost of his peace of mind.

Beautiful Ammunition, the first official solo album by English singer-songwriter Adrian Borland, is to be re-released as a 19-track double LP on the 18th anniversary of his death.
After the breakup in 1987 of The Sound – the post-punk band for which he is best remembered – Borland released two albums with The Citizens, the band he formed during the years he lived in the Netherlands: Alexandria (1989) and Brittle Heaven (1992). After touring in support of the latter recording, he returned to his parents’ home in Wimbledon. Once back in the UK, he started a new band, Lovefield, but although recordings were made, they were never released.
Instead, Borland wrote an entirely new collection of songs for a solo album, Beautiful Ammunition, whose recording was financed by his parents Bob and Win. It was released in 1994 on Resolve Records, a label founded by Borland and his father. Although it remains a favourite among Borland’s loyal following worldwide, at the time of its release it went practically unnoticed in the wider world of music.

Supplemented with three previously unreleased tracks, Beautiful Ammunition will be re-released on vinyl on 26 April, the anniversary of Borland’s death in 1999, by the label Sounds Haarlem Likes Vinyl (www.soundshaarlem.nl).

April Q&A Screening Tour with the Director and Producer

+ More cities to be announced

Passionate about independent under-the-radar music films that are largely ignored by risk-averse film programmers, they celebrate music subcultures by providing a platform to support their cinematic expressions. They provide their audience with the opportunity to watch these films as they were designed to be watched, amongst like-minded fans – LOUD. Post-screening Q&As, DJ sets and live music themed on the films add to the overall cinematic experience.