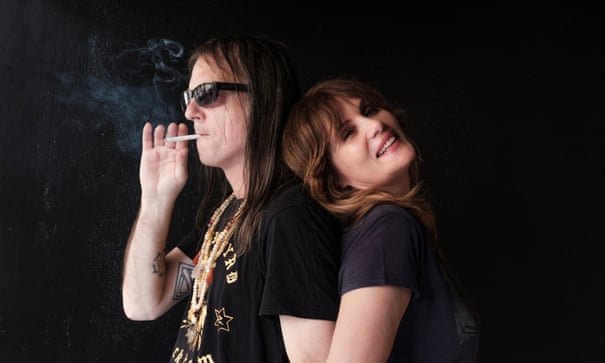 Of course this was always going to a great experience. Anton never lets you down and the second single taken from the album, Ghost Rider’ is tripped out lysergic  ooze and a wonderful suspension of belief dripping with the honey sweet seductive vocal of French actress, Emmanuelle Seigner, threading its way round Anton’s wonderful trippy backdrop of spiralling guitars, perfect tambourines and chiming mind fuck drones that drips dislocation and melody in equal addictive measures.

THEir SEMINAL ALBUM ‘DIABOLIQUE’ IS OUT NOW ON A RECORDINGS

THEY WILL PLAY CONCORDE 2, BRIGHTON ON 8THDECEMBER & EARTH, LONDON ON 9TH DECEMBER

‘Ghost Rider’ is the second single to be taken from L’Epee’s seminal album ‘Diabolique’, which was released in September to critical acclaim. The 3-track single contains an exclusive track ‘Shiny Shiny’ and the artwork has been designed by Frank Kozik; one of the rock world’s top poster artists.

“We are living in very culturally insular times, so it feels really good to be swimming against the tide,” says Anton of the band’s bi-lingual, cross-continental approach. “There’s something really positive about branching out, collaborating and taking risks.” Far from being defeated by a world seemingly regressing into turmoil, L’ Epee’s strength comes from a long history of challenging the status quo. From Anton’s legendary battles with ‘The Man’ with The Brian Jonestown Massacre to Emmanuelle’s eclectic screen career (she delivers the album in a sultry Gallic drawl which will send a frisson of recognition through anyone familiar with her iconic roles in, among many others, Frantic, Venus In Fur and Bitter Moon (all directed by her husband, Roman Polanski)) to The Liminana’s community-minded ethos – setting up their own record shop, L.G.D.C, and promoting gigs by the cream of the world’s garage rock scene, they share a fierce intelligence and an outsider aesthetic which, over the decades, has been sharpened to a razor’s edge. Fitting, then, that their name translates as The Sword. “It came to me in a dream,” explains Anton. “I woke up and there it was, ‘The Sword’. Someone told me there had already been a band with that name so I flipped it into French. It suits the band because we’re united in a common cause.” This pent-up creative energy has been channelled into their extraordinary debut album, Diabolique. Named in tribute to Mario Bava’s 1968 cult classic ‘Danger: Diabolik’, it’s a musical masterclass. Throughout, it’s shot through with a sense that L’Epee are embarking on a mission to a destination as yet unknown.

‘Diabolique’ is available digitally from: https://smarturl.it/LEpeeDiabolique and physically (Vinyl and CD) from: https://cargorecordsdirect.co.uk/products/lepee-diabolique