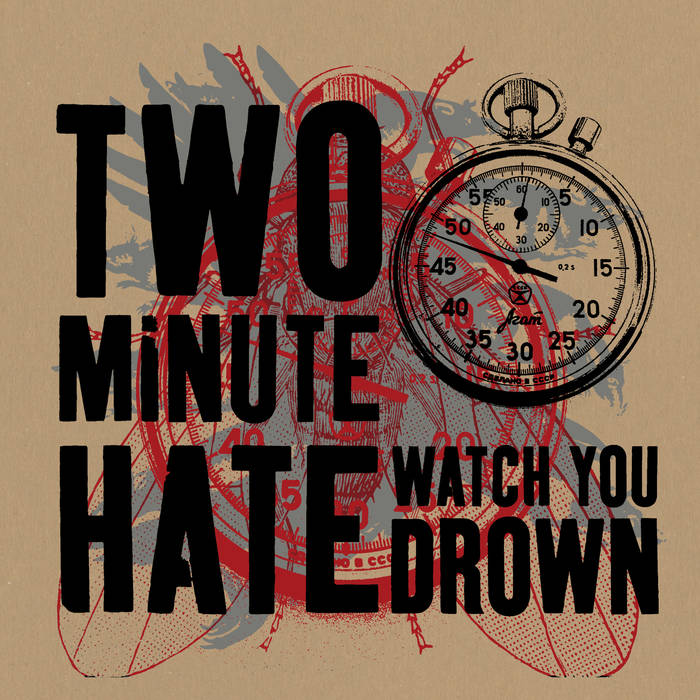 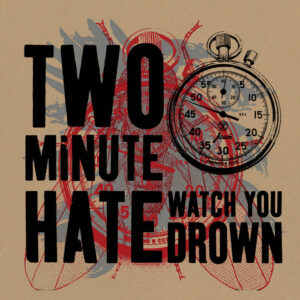 Mid-1980s thinking mans hardcore band from Portsmouth, UK, Watch You Drown  reformed in 2012 and their new material is their best yet.

The crow flies south in darkness/ put down your weapons and admit defeat.

Watch You Drown are not shiny, happy people. This is rock music for a New Dark Age….

There are two kinds of music. The stuff you instantly like, after a few seconds, maybe 30 seconds max…  and the kind which takes a bit longer; a few listens; maybe four or five.  Small sections or hooks stick in your head. A couple of lyrics go around in your mind; It slowly pulls you in….

The second kind is very often the best, in the long run.

Watch You Drown fall into the latter camp.

I have got to know Watch You Drown singer/guitarist Russ Bestley pretty well over recent years and he’s one of the coolest people I’ve ever met. I am full of envy of him as he has succeeded in dragging himself out of the gutter(s of Portsmouth) and makes a living in academia due to his lifelong love of and obsession with Punk Rock.

He gets mildly embarrassed about being a Professor of Punk and still sees himself as a scumbag from Pompey with a guitar and ‘something to say’.

So, this, the band he fronts’ second EP in recent years is important to him. It validates all of the years and time and energy and passion he has put into being a part of punk and the local hardcore scene.

I remember him in the 1980’s doing the sound and helping out other bands with malfunctioning equipment as well as playing with the 3 piece Watch You Drown – a wirey skinhead figure who I always saw as a local Ian MacKaye type character. Serious, intense and actively involved. He is the same nowadays; playing the odd song with old-punk mates (5 Go Mad) and young punk newcomers (Murderer’s Row) as well as fronting his own band.

The 7 song  Two-Minute Hate mini-album , maxi-EP is a beautifully packaged piece of work. The artwork/design is immaculately cool – with nods to the bands influences, Killing Joke and Wire (the stopwatch and the fly) which are there in the dynamics of the music too. ( A Stranglers Rat and Poison Girls Crow also make guest appearances..)

Lyrically, the songs are not straightforward.  Tight economical prose. Meaning(s) deliberately oblique.  The musical backdrop similar in a way….

There’s a brooding, controlled anger and the language used;  ‘mission creep’, ‘thoughtcrime’, evil empires,  together with imagery of ‘beating wings on a barbed wire fence’ and flags and bugles show that Watch You Drown have global  conflict and concerns on their agenda.

It’s far too simplistic to say that ‘Two Minute Hate’ is “about Trump”, Skin & Bone ” about refugees”  and so on.  These songs are just full of condensed ideas wrapped in some great glowering music.

I wish I knew how to describe the drumming rather than using the old chestnut ‘tribal’ … the bass-playing is more top-end and tuneful and musicianly than the usual punk rumble.  The guitar playing is balanced with the rhythm section so that it doesn’t dominate.  Watch You Drown are a tight unit who aim for a disciplined, taut sound.

Gods ‘walk among men’  (apparently) and Tectonic are puzzling apocolyptic songs.  Underground is the most immediate and tuneful and the guitar hook reminds me of Conflicts a Message To Who.

Crows starts with some great Malicious Damage style dub stylings and Fruitflies has an epic Theatre of Hate style gait to it and a heroic piece of guitar repetition and groove to the last two minutes. One of the best songs, the lyric had be stumped, until I googled the term Fruit fly.  It is about the wave of gender/identity-politics causing ructions in the punk community and elsewhere.  An issue which Russ has strong opinions on I know.

Watch You Drown, despite being the sum of their influences -from anarcho-punk to early-Dischord via post-punks like UK Decay, New Model Army and so on, (although on Tectonic they are the perfect distillation of Wire and Killing Joke) – are as unique a proposition as you will find in 2017.  Older, wiser but still as full of channelled anger and positive cynicism as ever. They have produced a great EP. Distinctive, progressive,  hardcore punk which has an intelligence and dark energy.

If they were half their age and American, with fashionable hair, then they would be considered contenders in New Dark Age Punk or some-such genre yet to be christened.

I will show you, where bitterness comes from.