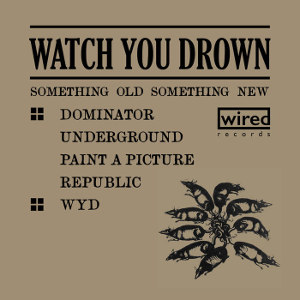 Watch You Drown – Something Old Something New (Wired)

Portsmouth’s Watch You Drown present a mix of old and new material.  Nathan Brown gives it the once over with help from expert witness Ged Babey.

Watch You Drown used to straddle the worlds of old school punk rock and the DIY hardcore scene.  In those idealistic days in the late 80s punk was a huge family and musical diversity was appreciated.  Playing for love (not the ridiculously low sums of money they would ask for) & gigging with the likes of Senseless Things & Mega City Four as well as DIY hardcore punk bands they built up a good reputation so it is likely this new trip to the studio will be well received by the, ahem, “older generation” who remember them from first time round.  As the title suggests, the EP contains reworkings of existing songs alongside new material.

One thing that stands out on this Watch You Drown is the vocal style – strident and enunciated are the words I would use.  Ged and I exchanging notes cited singers from that vein such as TV Smith, Steve Drewett of Newtown Neurotics and Hugh Cornwell of The Stranglers (who I’ve always thought were a clear influence on WYD) .   Something of a soft, restrained yet gravelly effect – sort of menacing without shouting.

The bass and drums have a very Stranglers-esque vibe throughout and the frequent deployment of tribal drums make Killing Joke references a dead cert. The keyboard at the close of opening track “Dominator” is also reminiscent of Killing Joke’s Requiem (but equally akin to the sound a Space Invaders video game).

“Underground” has an atmospheric soaring guitar on an indie trip and delivers the EP’s title phrase “Something old – something new ” before taking off with a speedy tune & a surfy riff.

“Paint  A Picture” is the point where the band really pay homage to their influences.   It’s there in the lead guitar that sounds like Stranglehold (UK Subs) being played by Husker Du as described by Ged although I thought it was in the vein of Boredom (Buzzcocks). In the lyrical department this love sonnet uses phrases like “Just Looking for a kiss” (New York Dolls ) and “No-one loves you when you’re dead” (versus The Stranglers “Everybody loves you when you’re dead”) – whether the borrowing was intentional or subliminal I have no idea.

“Republic” starts off with a bass line & drum combination that could have featured on New Model Army‘s Vengeance, a kazoo style keyboard sound pops up here & there and we are treated to more Buzzcocks style lead guitar at the end of the song.  Lyrically the song does what it says on the tin, sticking 2 fingers at the concept of hereditary leaders and the way our country is being turned into a plunderfest for private wealth creation: “No monarchy no subject/ Their privilege be damned / Once private now public / Working for the new Republic”.

The climax of the CDEP “WYD” features a never ending roll around the drumkit which could make you feel as if you are doing a roley-poley down a very steep and very long hill.  Almost enough to give you vertigo and it gets to the stage where the repetition becomes uncomfortable.  Something that I think musicians don’t do enough of – pushing things that little bit too far so you are our of your comfort zone.  There’s also another nod to the Stranglers – this time in the vocal department.  The lyrics are bleak and vicious.  You can draw your own conclusions but to me it sums up the very British habit of willing people to fail and taking glee from their suffering: “You’re standing on the inside looking at the sky/ To watch the sun go down/ I’m standing on the outside waiting for a chance/ To watch you drown”.  When performing this number I wonder if they are thinking of the NME reviewer who, back in the 80s, suggested WYD should be put in a sack of kittens and drowned?

The production on the 5 tracks has very much a “live” feel to it – it’s almost as if the band are playing in front of you.  Enough bounce and reverb to give 3 dimensions to the sound without going over the top.  Did I ever say how much I hate reverb? Weird for a man who loves delay effects and dub reggae…..The only criticism that Ged and I came up in our deliberations with is that the guitar isn’t done justice – perhaps a bit more raw and a bit more roar but then maybe that was the intention.

From his written/graphic output (Art of Punk, Hitsville UK  & much more), it’s clear that aesthetics are particularly important to singer/guitarist Russ Bestley. For this small run CD release (200, hand numbered, professionally duplicated and silkscreen printed in three colours) the band have opted for a rubber stamped cover on a naked card stock CD cover (that’s uncoloured not nudey you little pervs….) which gives it something of a retro feel.  If you want to grab a copy of the CD, it can be purchased (with digital downloads included) from their bandcamp.

WYD’s online presence seems to be restricted to their bandcamp page.