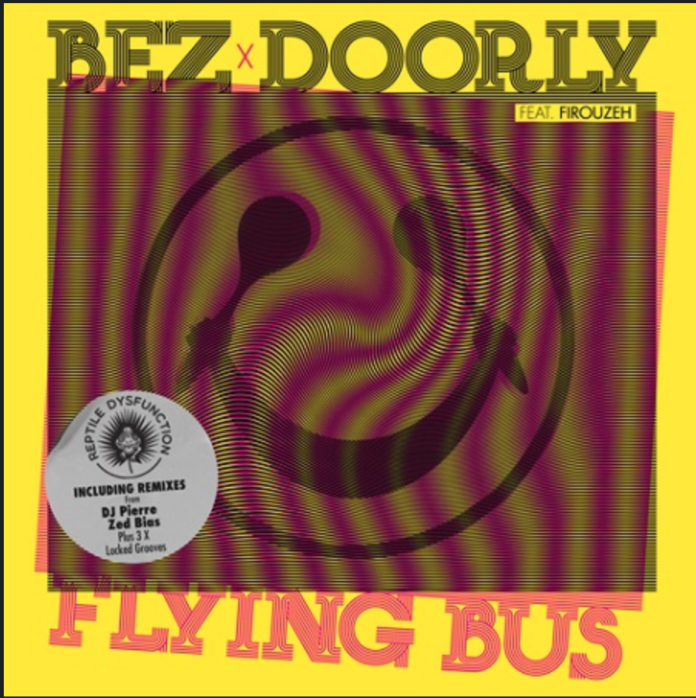 Manc legend and Happy Mondays dancing bear, Bez, has finally stepped up to the mic to make his vocal debut with ‘Flying Bus’ a collaboration with the internationally acclaimed house producer and DJ Doorly, with additional ecstatic vocals from Firouzeh.

A hypnotic homage to the glory days of acid house, a classic four-to-the-the-floor beat with those distinctive squelchy synths and bleeps and comes complete with a suitably surreal video that sees Bbez as the bus conductor and bus driver Doorly.

Bez has made the tune to recreate the magic of his legendary Flying Bus stage at Glastonbury, which is renowned as the place the hardcore party warriors congregate to keep the vibe rolling for as long as possible. And when there’s just one man left standing, it’s inevitably the lovable national treasure Bez!

“It was a brilliant work trip to Ibiza to collaborate with Doorly at his studio that created this tune. My Flying Bus stage at Glastonbury is really special to me and a great hangout for the hardcore party people. I’ve been missing it so much and this track conjures up that Flying Bus magic. The song is about that freedom you feel when you’re gathered with like-minded people. This is the first vocal track I’ve ever brought out and I’m nervous and excited at the same time. I hope people will get ‘on the bus’ and enjoy it, get lost in a moment in time, that’s the whole vibe!”  says Bez.

Doorly adds, “Writing a track together with the legend Bez was a hell of a lot of fun, not sure if you’ve met him but he’s a bit of a character! :) We really bonded over our shared love for the transatlantic Acid House movement from the late 80s / early 90s. Our aim was to bring a slice of that magic coming out of Chicago and Manchester around that time, with a celebration of Bez’s bonkers Flying Bus party at Glastonbury. It all came together and it’s a real pleasure to have Bez on my Reptile Dysfunction label, you can expect more from us both this year.”

‘Flying Bus’ is also available on limited edition fluorescent yellow and clear splatter vinyl. It’s backed with remixes from Chicago’s acid house pioneer DJ Pierre, who effectively invented the genre with Phuture’s ‘Acid Tracks’, and the UK bass hero Zed Bias who provides a ‘Frequent Flyer remix’. Doorly’s Reptile Dysfunction label have also provided a special touch, as the vinyl will feature three locked grooves for DJs to play out their own infinite loops from parts of the track.

Bez & Doorly will also hit the road this summer for a limited run of shows, including Camp Bestival today on release day!