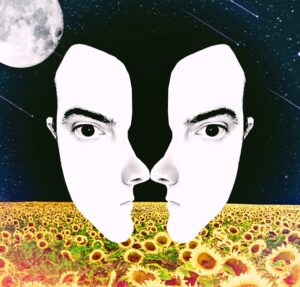 The concept of ‘lockdown’ has been the topic of much talk for a little while. You might just have caught onto this collective inconvenience. Will Southward of Wasuremono, a man who habitually spends days down the bottom of his garden slavishly crafting songs in his shed of glittering musical delights, probably didn’t feel the pinch quite as sharply as many of us when the ‘Rona loomed. One major Coronafaff, however – he was already sitting on a large body of songs that were well on the way towards completion for an album.

With another year of shed life, the tracks originally earmarked for release on Let’s Talk have now been joined by new creations for an enlarged, twenty-track release. And it’s not the kind of flabby, lethargic enlargement that many of us have inflicted upon ourselves during confinement. It’s quite a beast. Once the second volume of tracks has come out later in the year, it will eventually be unleashed as a gatefold double-LP.

In their early days, ‘dream pop’ was a label readily thrown at Wasuremono. To an extent, that phrase is still fit for purpose, but if the songwriting on Let’s Talk is indicative of Will’s dream state, sleeping or waking, then he’s probably not getting much rest. There’s plenty of wonk, giddy fast-slow-fast surges, ecstasies equally evocative of churches and of fairgrounds. We head to space twice. Will frequently duets with himself, falsetto vs baritone. While we can but speculate over Will’s sleep health, we can confidently identify the care and attention that the songs’ composition has received. Like recreating Middle Earth out of LEGO or a full-size HMS Arkroyal out of matchsticks for shits and giggles, Let’s Talk has tracks that feel layered to ‘labour of love’ level.

Bands tend to end songs at the very point where Wasuremono take them somewhere interesting for a couple of minutes more. An Ordinary Life is one such track. It aspires towards living contentedly, with just the right significant other. The idea that happiness could come from being “ultra-normal” feels mindfully anti-Insta. The album’s title track kicks things off with a Stray Cats/Love Cats strut, its skittish, plinky piano line contrasting with the cavernous depth of the drums. The Linn drum on many of the tracks makes you instinctively want to clap along (not ideal when you’re on the bus and you forget) like on the second half of I Feel Fine (Hallelujah), taking a glorious gospel turn.

Lyrics often contrast with their surrounding arrangement. Sunflower Fields starts off like a more upbeat Bette Davis Eyes, but bids “so long to all those memories we hold so dear.” Big Big Smiles bristles with energy, but lyrically suggests grinning through uncertainty. Goodnight England gives us autumnal decline through “leaves are falling.”

The final song on Pt. 1 is most timely. Feeling Like An Animal opens with spring-like birdsong and “feeling like a runaround outside.”  The idea of “living like an animal” rings absolutely true to our overly-domesticated selves. So when the song slows down, quietens and then gradually builds to the shout of “Go!” hailing a joyful, raucous, full-band big finish, it feels like the kind of wild release of pent-up emotion that we’ve had over the past week through the easing of restrictions. And if you’re not sure what that looks like, just pop to your local beer garden.