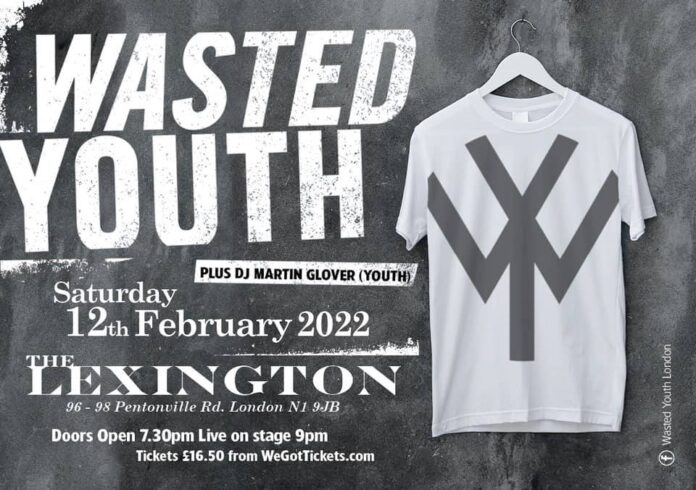 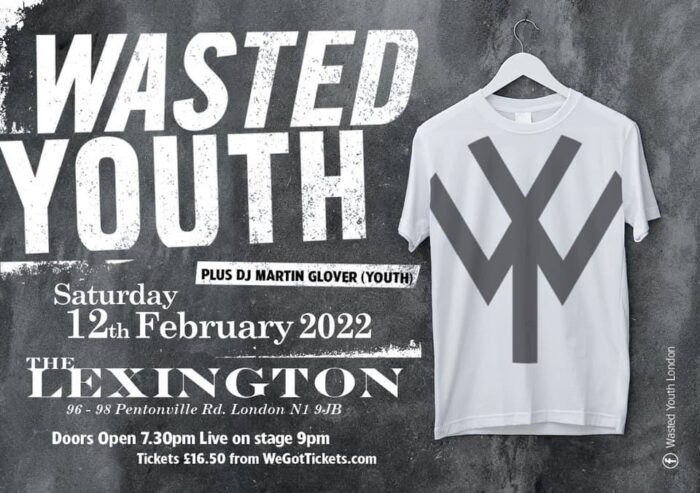 There is an American hardcore punk band with the same name – but this is the ‘original’, the London post-punk, sex-and-drugs-and Rock’n’Roll band from the East End (1979-82).

Wasted Youth were arguably the greatest ‘lost’ London band of the post-punk years. Rarely mentioned, if at all, in the era’s music history books, they were heavily influenced by the dark narcotic glamour of the Velvets, the Doors and Transformer-era Lou Reed.

The Only Ones Peter Perrett produced them, as did Martin Hannett. They were hugely popular as the Eighties dawned with punks looking for something more sexy and sophisticated and looked set to become much more than the cult band they became. They pre-dated Positive Punk and Goth and are still remembered as quietly-influential and a superb live band by fans.  (LTW  Darren Murphy obituary 2012)

And now, they are back! Ged Babey talks exclusively to guitarist Rocco Barker who suggests: ‘Call it a Wasted Youth – ReTox rather than a reunion!’

Well, this came out of nowhere! An advert appeared online. Two days later tickets went on sale and within hours it had completely sold out.

‘I’m still in shock’ said Rocco Barker down a crackling phone line. ‘I thought it would perhaps sell out by Christmas once word got out’.

Rocco doesn’t use the internet, but has discovered word-of-mouth is a lot quicker online. I asked him why now, after forty years, have him and singer Ken Scott decided to reform the band.

‘It’s now or never! Another one of our generation seems to die every week. We’ve lost Darren (Murphy) and Andy (Scott, the bands bassist and drummer) and it seemed like the only time we met up was at funerals.  It is seven years since we lost Nick Marsh.’

Barker joined Flesh For Lulu with Marsh after Wasted Youth split and he credits him with getting him away from hard drugs. Ken Scott wasn’t so lucky. I asked how he was, and whether his voice had ‘matured’ and gotten a bit Johnny Cash maybe.

‘Ken did have a stroke a while back, but he is clean and healthy. Yeah, I always think of him as a bit of a crooner, a character voice rather than a technically great singer.  He always got the Lou Reed and Jim Morrison comparisons’.

Rehearsals have been going well with Ray ‘Sonic’ Hanson from Thee Hypnotics on guitar, Hans Person on drums and Rocco’s wife TC on bass.  I told Rocco I remembered TC from the under-rated band she was in with Cleo (from March Violets) in the 90’s called Lovecraft. It turns out he was living with Cleo at the time and co-wrote some of their songs.

Rocco has kids now at secondary school, his eyewear manufacturing business in London and seems happy and healthy and surviving after years of rock’n’roll bad behaviour, not to mention that Costa Chaos TV series…

He seems genuinely pleased that people seem to remember Wasted Youth with affection – I told him they were the first band I travelled to London to see (after seeing them play Salisbury Tech in 1979) and how compared to the dour austerity of Joy Division the glamour and sex and narcotic danger of Wasted Youth and their ‘stone-age rock and roll’ meant much more to us 16 year olds looking for post-punk music that was fun!

‘Those songs are easy to play that’s for sure! That’s what it’s about, to have a bit of fun with it.’

So what is the plan now this gig has sold out? More gigs? An old-fashioned Residency? Secret gigs?

‘Band meeting tonight…with our agent, for want of a better word, he is a great guy called Ian who was a fan way back who used to drive us around in his Ford Cortina. Now he does our social media and helped us with this gig. More gigs definitely but we’re gonna have to find somewhere bigger!’

Rocco mentioned Festivals as an option…

I had to speak up.  No way. Wasted Youth in broad daylight! Open-air? If ever there was a sunglasses-after-dark band then it was Wasted Youth.  Maybe indoor festivals Rocco?  Futurama is back next year….

‘Is it? We played at the original Futurama. Great. So there is an audience out there for us…’

There is. Touring with the Psychedelic Furs and the Only Ones back in the day, a cool proto-Gothic look and those classic, if at times a bit corny, songs, means We Remember You… 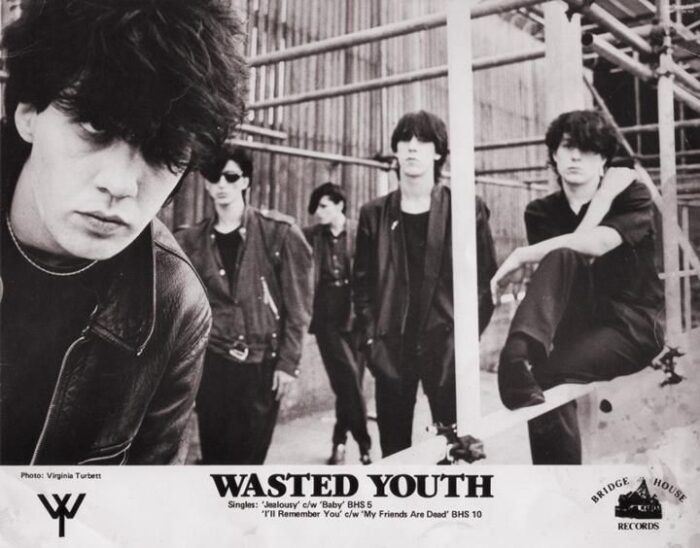 Wasted Youth only ever released one proper studio album the Wild and The Wandering but there was a ropey live album and a dodgy odds and sods compilation. A more recent singles collection Memorialize is the most easily available and best place for newcomers to the band to start.

Here are five of my Youth favourites as a reminder or introduction to their sex ‘n’ death ‘n’ French girls oeuvre.

From the only studio LP. The epic closing track concerning ‘Charlie and Harry’ ….

My Friends Are Dead

Newspaper headline title which had fuck-all to do with the song… which wins in the Greatest Lou Reed homage Ever stakes.

An atmospheric jam loaded with reference points by way of song titles – and liberally using the phlanger as a psychedelic weapon.

Starting gigs with the words ‘We’re Wasted Youth, welcome to Paris’ was a stroke of genius if you were 16 and in a draughty hall in a Wiltshire market town. The song seemed to psychically link the band to Adam & the Antz (Young Parisians era) whose fanbase they partially inherited when Adam sacked the Dirk band.

Wasted Youth can be contacted at their new official Facebook page which you should follow closely for news of any other gigs.  The Lexington gig sold before this piece could be typed.

Thanks to RB and in memory of Darren Murphy and Andy Scott. 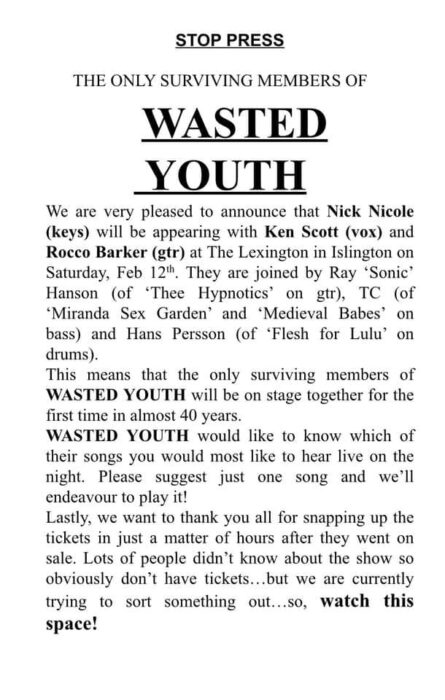