Home Blogs Was Siouxsie And The Banshees sixth Album Hyæna their masterwork? — a...

Siouxsie And The Banshees — Hyeana

If you haven’t already, I’d strongly advise you all go and read Joe Whyte’s excellent reappraisal of the debut Siouxsie and the Banshees album ‘The Scream’. After all, ‘The Scream’ is a really important album, broadening perceptions of what punk could be.

But I’ve chosen to re-evaluate Siouxsie and the Banshees highly underrated sixth album, 1984’s ‘Hyæna’, showing how the band went far beyond punk to be every inch as relevant in the eighties as they had been in the late ’70s. Because they were closely tied with the idea of punk, this phase has come to be underappreciated – as indeed, it was at the time as the Banshees were somewhat left behind.

‘Hyæna’ doesn’t contain songs that the man in the street will know. There’s no ‘Hong Kong Garden’ or ‘Happy House’ here. What we do have is an epic Gothic fairytale brimming with a sinister sensuality (Paul Morley uses the perfect description, “daydreams which edge towards nightmare.”)

Angela Carter claimed of her 1979 short story The Bloody Chamber, that she wanted to create a “style that utilises the heightened diction of the novelette, to half-seduce the reader into this wicked, glamorous, fatal world.” I find Sioux’s lyricism on ‘Hyæna’ more comparable to Carters short fiction that I do to any other songwriters, as this album also fulfills this kind of “wicked, glamorous, fatal world,” – not just lyrically but sonically.

Opener ‘Dazzle’ is a rich and glittering opus which must still rank as one of the most beautiful opening tracks on record, capitalizing on their first use of strings on previous album ‘A Kiss in the Dreamhouse’. Like all good mythology ‘Dazzle’ is a mix of darkness and light in its imagery, before the light stops and the vampiric thirst of ‘We Hunger’ kicks in – in which there’s a “ravenous greed/ for a brood to feed,” and the “white with avarice” protagonist begs “feed me with your belching foul breath,” all of which evokes Carters vampire story The Lady At The House of Love, in which a lonely, lustful vampire in a house “filled with rot and fungus” feeds on her victims after “playing a game of patience until she grows ravenous.”

Carter’s sensuality is feminine but at times utterly brutal in its direct handling of the macabre; ‘Hyæna’ is somewhat similar. “Kinder with poison than pushed down a well,” sings Sioux on ‘Swimming Horses’ over a beautifully clever guitar line from Robert Smith, at the time dividing himself between the Banshees and The Cure – and proving how underrated his musicianship is — , the sonic nuances on ‘Take Me Back’ are spine tingling; of their time and yet timeless.

The role of the rhythm section should not go unmentioned either. Steve Severin and Budgie (the former contributing to some of these captivating lyrics) underpinning these oft-complex structures. Closer ‘Blow Your House Down’ twins Wicker Man imagery with a huge apocalyptic sound tailor made for 1984– Orwell’s predicted year of dystopia being fulfilled by Thatcherism and the peak of the miners strike.

The Goth label, which the Banshees came a little too early for originally, is at its most fulfilled on ‘Hyæna’. The Banshees had shown themselves capable of switching between the cold and clinical (such as on their next album ‘Tinderbox’ recorded by the Berlin Wall and capturing the stark Germanic feel) and the lush and rich with equal effectiveness. ‘Hyæna’ fulfills the latter. It is our adult (latent) fantasies, our childhood nightmares, a kiss which then poisons us… a gem to be rediscovered. 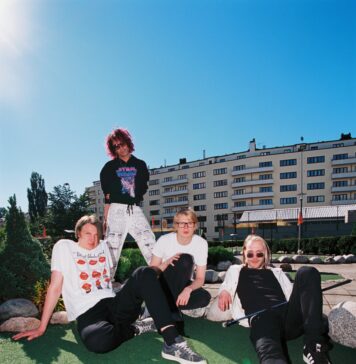