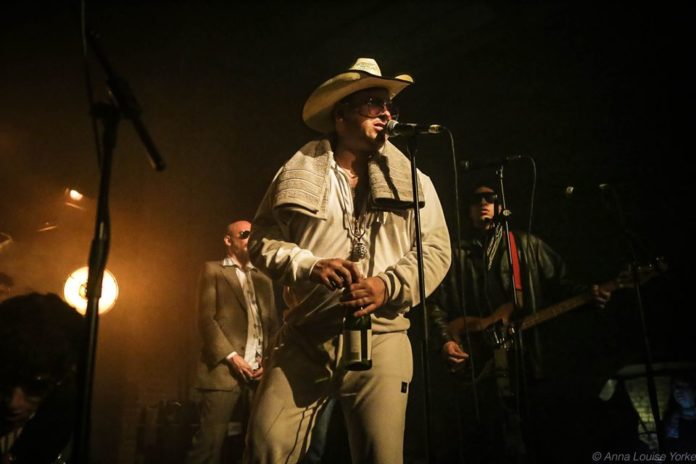 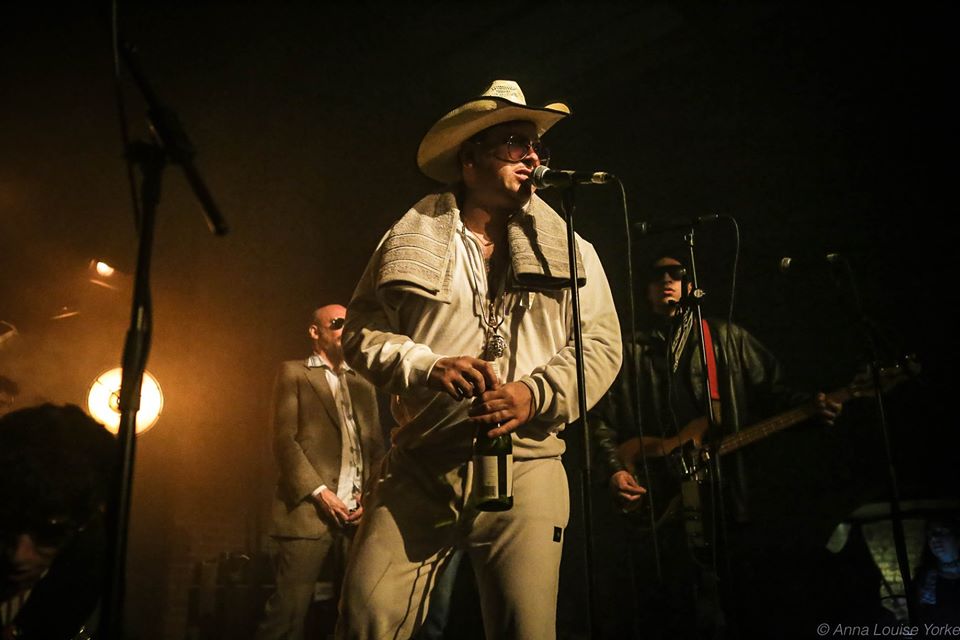 Keith Goldhanger hailed Warmduscher one of his highlights at the years Standon Calling Festival in the summer. Here he witnesses a headline show by the band under the roof of East London’s Village Underground. Photo by Anna Louise Yorke.

During one afternoon (It may have been in the evening or morning) at this years Standon Calling Festival a man in a bright pink suit stood among the huge crowd of families and music loving festival goers imitating Elvis whilst singing Nirvana songs and giving those in attendance some additional dull dinner anecdotes to go with the story of where they got the Wedgwood coffee pot from.

Later that day (or earlier, or the next day, or the night previously), on a smaller stage and in front of a slightly smaller crowd another man stood on stage, looking just as flamboyant but hollering out the words to the songs penned by himself with the accompaniment of some familiar faces we’d previously spent good money on watching perform in all their other bands we’ve been falling for over the past few years.

Some of our German friends tell us that the word Warmduscher can be translated as describing people who struggle to step out of their comfort zone. First impressions are always important and seeing a band that appeared straight away to not be afraid of stepping out into the cold was exactly what the doctor ordered for some of us. A band being twice as entertaining as a cabaret cover versions band and looking just as cool.

Cramming three other great acts on the bill tonight was a pretty good way of maintaining the support for similar bands. Beginning with NUHA RUBY RA (Arrows of Love) playing whilst we were still having our tea, MEATRAFFLE (not as terrible as when we saw them a few years ago and owning that trumpet like no other band could be expected to own it) and Squid, who actually managed to show us that they’re the band that actually can own a trumpet as great and equally as dignified as the one on the same stage half an hour earlier (this had us asking ourselves to name all the other bands also using this instrumentation in 2019 – we came up with a few).

Warmduscher, a supergroup (if you like), have paid their dues around every tiny London venue over the past few years and tonight play a sold out show at the 1000 capacity Village Underground in front of an audience who probably don’t own one coffee pot between them and are ready to burst into wild abandon from the moment the band arrive on stage. We’re treated to a long ride featuring some sleazy, dirty, sexy, noisy, funky, rock & roll, disco, arm waving moments and it makes you wonder sometimes why some people such as those blokes standing behind that Elvis guy last summer spend so much of their time trying to recreate songs we’ve heard a million times and telling the same joke every time they turn up when they could be having even more fun doing stuff like this.

Warmduscher are a truly great original rock and roll band that make you smile a million times for a million different reasons. The hat, the made up names, the (fat) disco bass lines, the backing singers, the hip wriggling natural reaction the listener gets as soon as 1000 Whispers kicks in, the sincerely and the glorious sight of chaos as each member suddenly finds the microphone for those all important backing vocals. It’s obvious that this isn’t all made up on the spot as it was when the band first appeared on stage half a decade ago at one of those many parties those of us north of the river are told are always taking place in the South.
At times it’s like watching John Spencer fronting Fat White Family whilst throwing in a couple of ridiculously harsh sounding disco foot stamping soon to be classics along the way.

There’s a party going on up on the stage tonight as the band throw us tunes from all three albums we now have available. The front few rows are getting handshakes, the band are drinking wine straight from the bottle whilst casually observing the odd crowd surfer unable to find their feet until the tune they’re literally being carried away with ends. By the end of it all the front three rows all seem to be on stage with the band having a good old rock & roll knees up. It’s ridiculous, it’s glorious, its unforgettable, it’s a celebration and it’s like taking a warm shower straight after taking a cold wet walk in the forest.