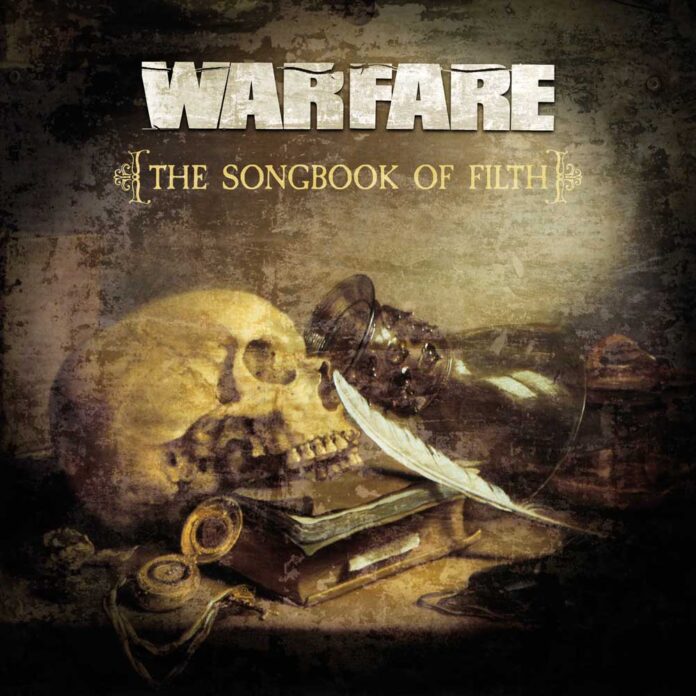 Warfare – The Songbook Of Filth 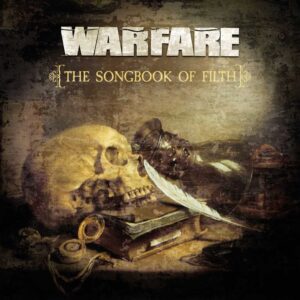 Career-spanning 3CD collection of demos, radio sessions, rehearsals, live tracks and some new offerings from North East-bred metal punks Warfare. The band’s leader and drummer Evo made his way through punk groups Major Accident, The Blood and The Angelic Upstarts before striking out on his own with Warfare. Ian Canty waves the white flag…

Paul “Evo” Evans first started out drumming for Darlington’s Clockwork Orange inspired punks Major Accident, before then moving on to South London oi! boys/shock rockers The Blood. After a time spent behind the traps for Mensi and the very fine Angelic Upstarts, he decided that he wanted to break away from being, in effect, just another member of a backing band. He wanted instead to set up a vehicle for his own ideas about music.

In the early 1980s he formed Warfare, which put his notions into practice. They were forged as a combination of the punk he had played in the past and heavy metal. This mixture of punk and metal was a fairly new notion at the time, with not much being shared by what stood then as two completely distinct genres. As the years passed the twinning of the two became a well-used methodology, with bands from each strand drawing on the other element and scoring success as a result. But back in 1983 what Warfare presented was a fresh concept and set the path for many others to follow.

With a rolling cast of players and guests, Warfare made waves with their hell for studs and leather approach and punky chaos across nearly a decade. They finally threw in the towel in 1992, but after over a quarter of a century of inactivity, Evo has gone back to making music in the past few years under the Warfare name. What we have here in The Songbook Of Filth is potted history of the band, with some glimpses of what to expect in the future in the form of new songs.

From the opening track Black it is clear Warfare gained some inspiration from the pioneering masters of punk attitude in a hard rock & roll context Motorhead, with the tune having a similar unstoppable momentum to the work of Lemmy’s boys. Fittingly enough, Fast Eddie Clarke and Wurzel from that band put in appearances during the early selections of The Songbook Of Filth.

Both Let The Show Go On and Burn Down The Kings Road (Taken from the Friday Rock Show, with a spoken intro from DJ Tommy Vance) are convincing stabs of punk-metal attack and the manic soloing of Cemetery Dirt provides a great deal of fun. A heavy and gutsy Death By A Thousand Cuts has Fred Purser of Penetration fame pitching in on guitar, with a chugging, jokey take of Robert Palmer’s Addicted To Love retitled Addicted To Drugs. That Warfare do an energetic and ragged cover Sick Boy on this first disc is pretty apt, because at times they come over a little like a slightly more metal-inclined GBH. The no-nonsense riff bonanza of Depth Charge and fuzzy singalong Solitaire Dementia bring the first part of this set to a close in thunderous style.

Next we come to the second disc of this collection, which opens up with a live New Age Of Total Warfare. This seems to be rapturously received by the crowd in attendance and the song itself sets out the band’s live fast and somehow live to tell the tale modus operandi in lucid fashion. It is followed by the song Rabid Metal and then a fast and punky Metal Anarchy, which both appear to be taken from the same gig. Ebony Dreams again comes from the BBC session that included Burn Down The Kings Road and this song winds its way from a long spoken word introduction into a neat hyperactive rhythm.

A lo-fi live recording of Hungry Dogs from the band’s 1986 Mayhem Fuckin’ Mayhem LP sounds jolly exciting and next comes This Machine Kills, which in another version was the a side of an early Warfare 7 inch single. This demo version is a really rough and ready treat. Algy Ward from The Saints/The Damned/Tank is present producing a few tracks on The Songbook Of Filth and also plays guitar on a suitably epic sounding Baron Frankenstein. This segues into the synth washes of A Velvet Rhapsody, until the strident stamp of the more straightforward thud of Strangled usurps it.

The final three songs on disc two take a look back at Evo’s pre-Warfare drumming history. Major Accident were a band that came up with some great tunes and were in my view somewhat under-valued on the early 1980s UK punk scene. Fight To Win was one of their best singles and the live take that is presented here may be a bit at odds with what is on the rest of this disc, but it would be churlish to complain when this ebullient poppy punk tune looms into earshot. A rehearsal recording of The Blood’s Degenerate is a bit iffy sonically, but the rush of energy just about makes up for it and a live version of The Upstarts’ Two Million Voices closes out disc two of The Songbook Of Filth.

The third disc, or chapter three as it is billed here, gives us another version of the song Misanthropy. This number cropped up earlier on The Songbook Of Filth in a different form, but here it features the combined talents of Nik Turner, Eddie Clarke and Paul Gray from The Hot Rods and the Damned. A galloping Noise, Filth And Fury, the title track of their first EP, comes complete with a monster-style vocal effect and catchy oi!/metal anti-royalty tune Burnt Out is satisfyingly raw. The blazing thrash of final track of the collection Military Shadow underlines the high energy approach of the set once more and thus equips the listener with a pretty pithy and rocking conclusion.

Some of Warfare’s subject matter may seem a bit of its time (to be charitable), but the sheer thwack of their music cannot be denied. There is also a fair amount of promise in the new material included and it would be interesting to see how those songs pan out in a live context, if anything like that is on the agenda. Though there are rare cuts in this set that will be of interest to the confirmed fan, The Songbook Of Filth also works as a good introduction. If you are intrigued by the work of Warfare, one of the first bands that could truly call themselves punk metal, this is a smart enough place to get your first taste.