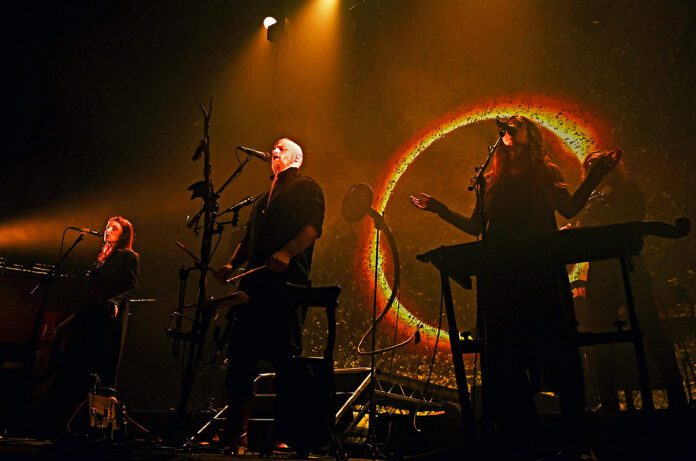 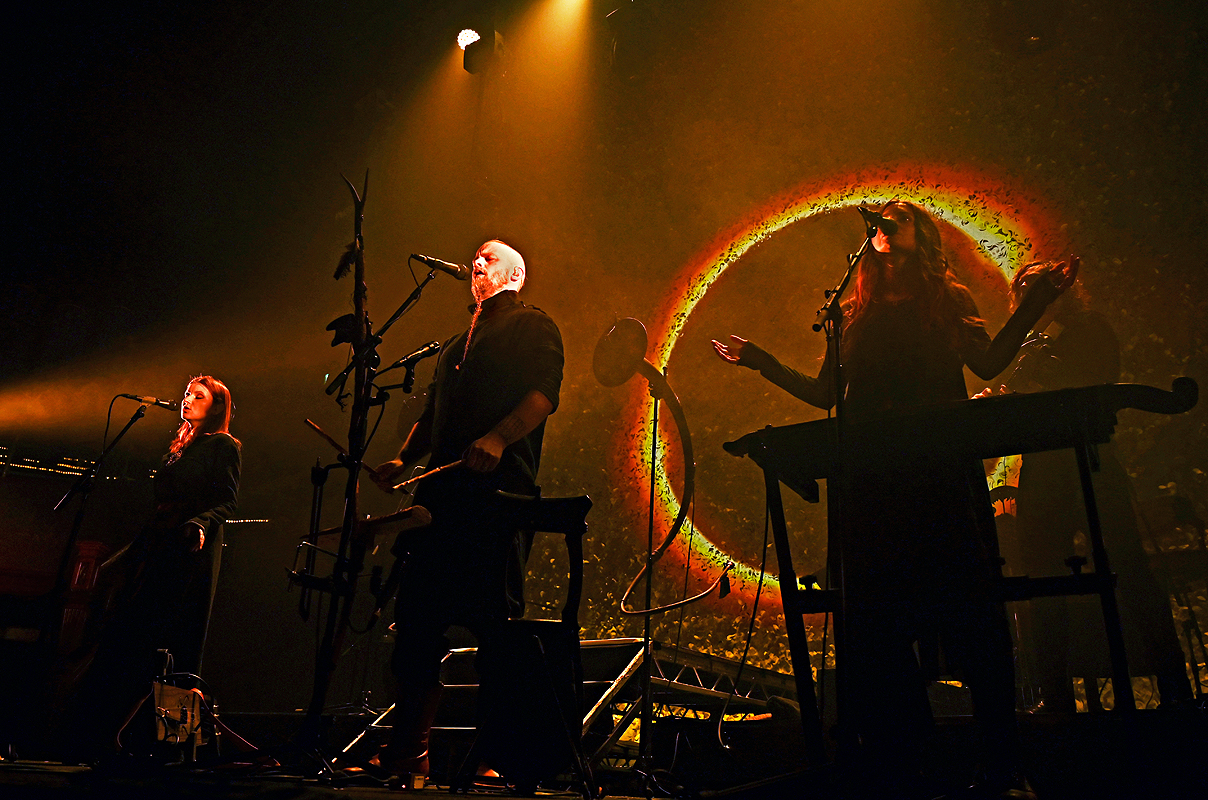 Magnificent and majestic Wardruna continue to mesmerise with their magical take on pagan folk sounds and traditions. The project, founded in Bergen Norway in 2002 by former black metal drummer with Gorgoroth, Einar Selvik, (interviewed by John Robb here) taps into the deep deep themes of life and death and the power of nature. They tap into the mist-shrouded past and its spiritual pagan nature mores and reinvent it for the now with stunning salt-stained dramatic melodies and haunting songs that fill Manchester’s spectacular Albert Hall with their trademark sound.

A sound that has broken out of the underground with Wardruna composing the score for season 2 of the hit box set TV series Vikings that has seen them enter the mainstream without watering down their unique, bold and mesmerising vision. 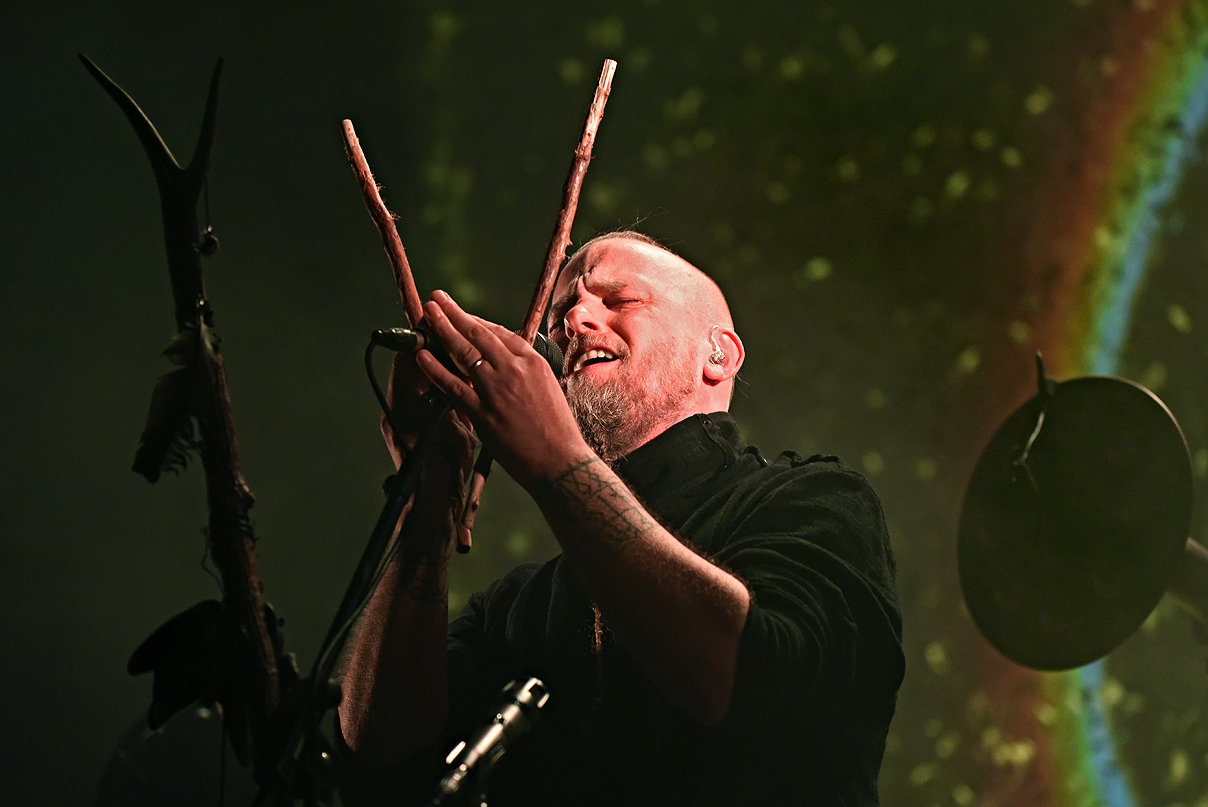 In these perilous times when humanity’s collective madness seems hell bent to bring the house down, it’s reassuring to have a corner in a culture where deeper themes are celebrated and the permanence of nature is celebrated. The set starts with Kvitravn with the white raven of the song title and also Einar’s stage name flickering on the band’s backdrop reminding the audience of the band’s current motif – the albino version of the normally spellbinding black feathered brethren staring at the camera with its regal bill and deeply intelligent eyes. Steeped in an interest in Norse mythology that was sparked by the Einar’s roots in the notorious black metal underground of his home town Bergen in Norway, Wardruna are unique in their vision.  Einar was initially in black metal bands like Gorgoroth, who he drummed for between 2000 and 2004 and where he met and bonded with the charismatic vocalist Gahl who he once called the most pagan person that he had ever met. 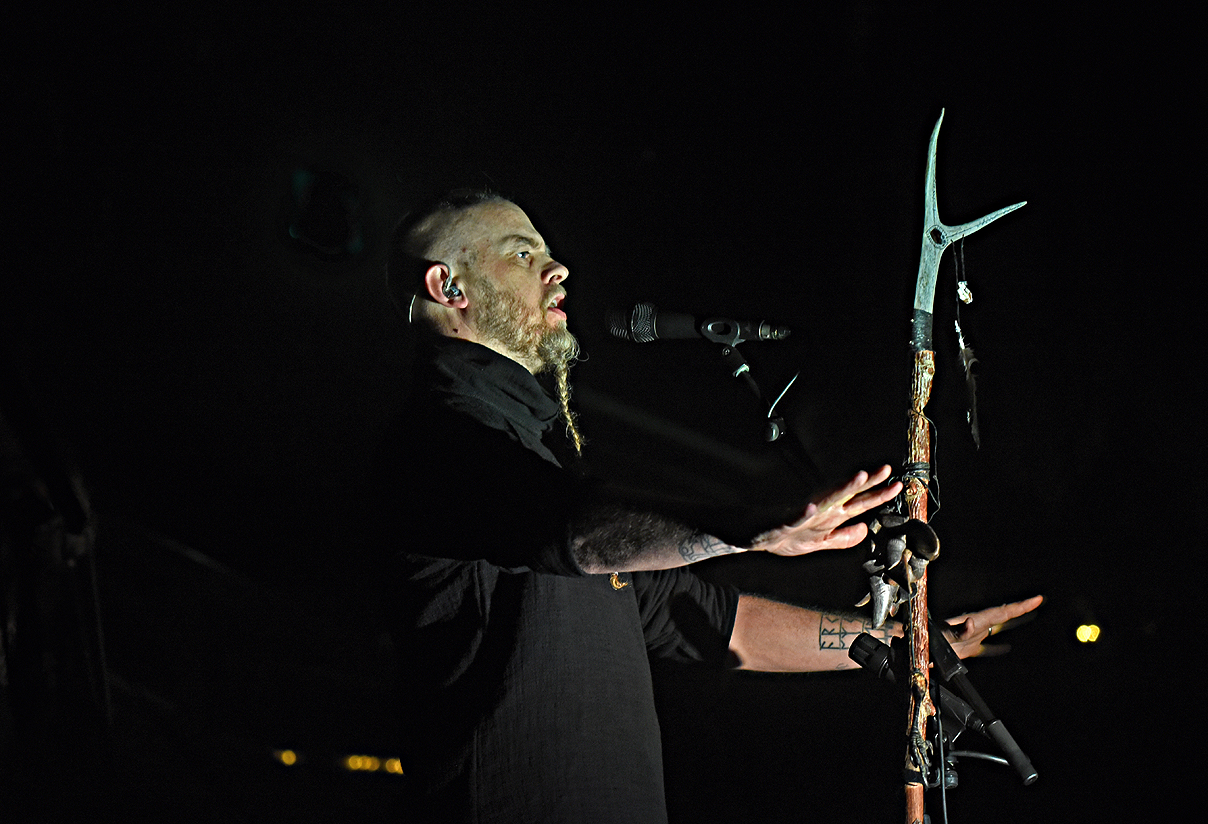 Black metal had a yearning for permanence and history that sparked Einar to the pagan pre Christian Norway and its Viking lore and its music. Instead of wallowing in a museum piece version of his culture he reconnected with the past and took it into the future. Wardruna are a conduit between the wisdom of the rich pageant wisdom of the past that makes sense of the now with their music and philosophy. The shape-shifting melodies, rich harmonies and pulsating trials drums are a conduit of a celebration of the Viking past and animistic and pagan beliefs and a way of understanding the now.

This is now a dusty archive. Wardruna are very much in the present. The presentation of their live set is 3D stunning with the lighting adding to the song’s unique atmospheres with a series of shadows on colours embellishing and underling the music’s brooding theatrical moods.

Einar stands centre stage leading the songs with his beautiful emotional voice which is given an extra power by the harmonies and sometimes soaring leads from Lindy Fay Hella and Katrine Stenbekk who flank him. These exquisite harmonies that overlap and entwine also sometimes feature Lindy’s soaring blissful voice setting off on its own ethereal tangents sending shivers up your spine.

The three voices play off each other in melodies, textures and nuances that are full of the soaring sound of nature and our place in it. The harmonies are the heart and soul of Wardruna but the instrumentation is also key with the pounding tribal drums and the collection of Nordic historical and traditional instruments like the deer hide drums, flutes, droning mouth harp, and even more esoteric pieces like the kraviklyra, tagelharpe, mouth harp, goat horn that all make for evocative and original soundscape terrains. The Lur is perhaps the most iconic and the ten foot long horn get their own huge cheer when they are lifted high into the air to create a disconcerting drone of their own.

The lamenting melodies and the deep forest rain anthems create an emotional wave that shivers through the audience – many of whom look and dress like post-metal Vikings. There’s plenty of black and plaits and braided hair as a nod to Wardruna’s interest in the form. At a Wardruna shown you hear sounds you would never hear anywhere else, the unique instruments make sure of that and the combinations reflect this damp world of fjords and folklore of the spiritual warrior heart of the Vikings and the mystery and power of nature from deep in the Norwegian forests and the nature of the eternal hunter and the hunted.

Wardruna echo with the wisdom and the folklore of the long lost past creating powerful and spellbinding music that resonates to this day. The shivers of nature and inclement weather and the power of the planet that is way beyond our puny understanding literally drip out of powerful pieces like Rotlaust Tre Fell with its apocalyptic tribal drumming and chanted vocals or long term favourite Heimta Thurs with its brooding haunting soundscapes and heartbeat tribal drum thud. These kinds of pieces neatly contrast with Einar on his own with just voice and lyre delivering the spectral haunting Voluspá (Skaldic Version) in a powerful reminder of Warduna’s multifaceted ability to conjure up these atmosphere’s from so many different styles.

A monumental Helvegen ends the set, it’s rousing and swirling harmonies creating an emotional rush that even shuts the fuck up out of the drunken couple at the bar who sent £40 each on tickets to talk all the way through the set louder than the band. The song’s themes of death and crossing over to the other side have never felt and sounded so pertinent after years of plagues and war. It’s so typical of Wardruna to grapple with the deep and darker mysteries of life and death and make sense of them in song.

The set ends with just Einar again and his lyre delivering the stark and emotive poetry of Snake Pit Poetry written for History Channel´s Vikings about Ragnar Lothbrok’s fatal encounter with a Northumbrian Snake pit in season IV. It’s a startling end to the set…the room is in total silence and spellbound by the power of a deeply emotional music from this most unique of groups.

Photos by Trev Eales. More work by Trev on Louder Than War can be found at his author’s profile. His photography portfolio is here