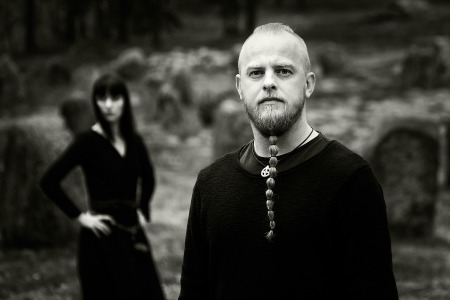 WARDRUNA RETURN WITH THEIR THIRD INSTALMENT OF THE RUNALJOD TRILOGY – RUNALJOD RAGNAROK, DUE FOR RELEASE OCTOBER 21ST VIA BY NORSE MUSIC

Wardruna are finally ready to present their next album entitled Runaljod – Ragnarok. It is the third instalment in a trilogy of albums that began with Runaljod – gap var Ginnunga (2009) and continued with Runaljod – Yggdrasil (2013). In short, the ambitious idea behind the trilogy was to create musical interpretations of each of the twenty-four old Nordic runes. It proved to be a lengthy and challenging task. Some of the material on the album even dates back to 2003 and the early stages of the project, when multi-instrumentalist and songwriter Einar Selvik started to develop the genre-defying sound and style that Wardruna have become known for. It is a contemporary sound, but one that is characterised by the use of old and historical instruments like Kraviklyra, taglharpe, goat horns, birchbark lures and more. The vocals range from whispering voices to melodic song and mighty choirs. All performed with sincerity and conviction.

Musically and conceptually there is a clear continuity between all three of the albums, but with time and experience comes refinement. And new elements have certainly been added along the way. Most notable on Runaljod – Ragnarok is the use of the Scandinavian bronze lures, whose iconic sound and appearance make them a perfect fit with Wardruna’s instrumentation and concept. Special guest performances by Einar’s own children and Skarvebarna children’s choir must also be noted.
Runaljod – Ragnarok was written, recorded and produced by Einar Selvik from 2003 to 2016 at his own Fimbulljóð studio. A short tour in support of the album will commence in November, with concerts in Norway, Germany, Poland, Netherlands, France, Sweden, Denmark and the UK (full listings below). Many of the concerts have sold out quickly and further touring is planned for 2017. The saga continues…

The Norwegian music group are dedicated to creating musical renditions of Norse cultural and esoteric traditions. With the use of the oldest Nordic instruments and poetic metres, lyrics written in Norwegian, Norse and proto-Norse tongue, Wardruna sets out to give new voice to ancient and ever-relevant ideas and wisdom from the past.  The group was founded in 2002 by Einar Selvik. After the release of their debut album in 2009, they have patiently established themselves internationally as important communicators of Norse and Nordic cultural heritage. Wardruna are known for doing relatively few, but often very special concerts, and always to high acclaim. The most spectacular example is perhaps when they performed in front of the majestic 1100-year-old Gokstad ship at the Viking Ship Museum in Norway.  During the last three years Wardruna and Einar has reached a wider audience through his substantial musical involvement in History Channel’s hit TV series Vikings. On two occasions Einar has also appeared on-screen in a guest role.
www.wardruna.com
www.bynorse.com