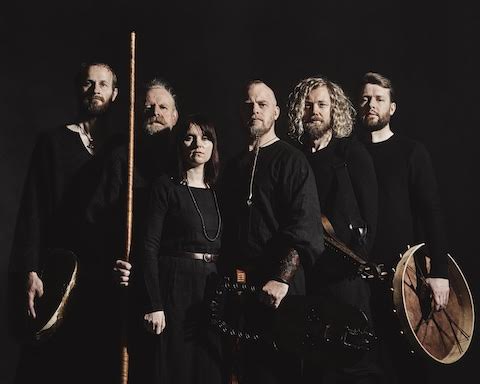 RARELYUNABLE PRESS RELEASE
(Photo credit: Kim Öhrling)
HI RES IMAGE AND ARTWORK HERE
WARDRUNA ANNOUNCE THE WORLDWIDE RELEASE OF THEIR NEW ALBUM, KVITRAVN
ON THE 5TH OF JUNE VIA MUSIC FOR NATIONS/COLUMBIA GERMANY;
UK AND IRELAND SHOWS IN THE WEEK OF RELEASE
PRE ORDER BUNDLES FOR THE RECORD AND LIVE DATES ON SALE
Masterful Norwegian storytellers Wardruna reveal the release date and title of their brand new album, Kvitravn (meaning White Raven), incoming on Music For Nations/Columbia Germany, on 5th June. A preview of the artwork can be found below, and the first preview of audio from the album will arrive on 21st Feb.
Following an intensive period in the studio, Kvitravn musically continues where the Runaljod trilogy left off, yet it marks a distinct evolution in Wardruna’s unique sound. In a rich musical tapestry, Wardruna use a broad selection of both traditional and historical instruments such as Kravik-lyre, Trossingen-lyre, Taglharpa, Sootharp, Langeleik, Crwth, Goat- horn, Lur, Bronze-lur, flute, Moraharpa, and the record also features guest appearances by a small group of prominent traditional singers, spearheaded by Kirsten Bråten Berg, one of the most important custodians of Norwegian traditional song. Throughout eleven songs, Kvitravn discusses Northern sorcery, spirit-animals, shadows, nature and animism, the wisdom and meanings of certain myths, various Norse spiritual concepts, and the relation between sage and songs.
About the new album, Wardruna founder Einar Selvik reveals, “To recite and copy the past is not very difficult, but to understand and integrate ancient thoughts, tools and methods with real purpose into a creation that is relevant to the modern era is truly challenging and remains our prime goal in our work”; He continues, “although the album carries a variant of my own totemic artist name, it has, in this context, little to do with me but rather refers to the symbolism and legends of sacred white animals found in Nordic and other cultures all over the world. These highly regarded ghostly creatures, whether a raven, snake, bear, moose, reindeer, elephant or lion – are in animist traditions seen as prophetic, divine messengers, and guardians representing renewal, purity and a bridge between worlds”
Also revealed today is Wardruna’s only mainland European show during the week of release taking place on 11th of June at the Gelsenkirchen Amphitheater, Germany. Full details of all of their incoming live performances below.
Wardruna have carved a rich, polyphonic and dramatic musical landscape that honours the ancient past without gimmick, whilst simultaneously illuminating meaningful expressions of Norse tradition through intrinsically detailed contemporary composition. Beyond genre, theirs is a sound that must be ​truly ​experienced.
WARDRUNA 2020 EUROPEAN TOUR DATES:
28 Mar – Oslo (NO) – Sentrum Scene
02 Apr – Kristiansand (NO) – Kilden Teater
03 Apr – Stavanger (NO) – Konserthus
04 Apr- Bergen (NO) – Grieghallen
30 Apr – Moscow (RUS) – Crocus City Hall
01 May – St. Petersburg (RUS) – Yubileyny Sports Palace
03 May – Poznan (PO) – Hala Ziemi
04 May – Krakow (PO) – ICE Congress Center
05 May – Bratislava  (SK) – Refinery gallery
07 May – Belgrade (SRB) – Sava Centar
08 May – Bucharest (ROM) – Arena Romanele
04 Jun – Manchester (UK) – Albert Hall
05 Jun – Dublin (IRL) – Vicar St.
06 June – Birmingham (UK) – Symphony Hall
07 June – Glasgow (UK) – Royal Concert Hall
09 June – London (UK) – Royal Festival Hall
10 June – Cambridge (UK) – Cambridge Corn Exchange
11 June – Gelsenkirchen (DE) – Amphitheater
20 June – Clisson (FR) – Hellfest
15-18 July – Ostrava (CZ) – Colors of Ostrava Festival
01 Aug – Savonlinna (FI) – Savonlinna Opera Festival
12-16 Aug – Dinkelsbühl (DE) Summer Breeze Festival
12-16 Aug – Midgardsblot (NO) Midgardsblot Festival
05 Sept – Selb (DE) Festival Mediaval
21 Sep – Reykjavik (ISL) – Harpa
ABOUT WARDRUNA…
The Norwegian music constellation Wardruna are renowned for their innovative and genre-creating renditions of older Nordic traditions. Composer Einar Selvik initiated the group in the early 2000s. Since the debut album in 2009, Wardruna have had vast worldwide success, transcending music genres, cultures and languages. The group has previously charted in both Germany and the UK and topped the North American Billboard World-music chart for several consecutive weeks. The group’s massive musical contributions to History Channel’s TV series VIKINGS has exposed their music to a broad audience worldwide. Wardruna merge the academic with the pop cultural and their thorough and serious approach has made them one of today’s foremost communicators of Norse culture.
• Top international scholars on Old Norse studies today use Einar’s work to exemplify how music might have been executed in earlier times in Scandinavia.
• Einar Selvik has lectured about his work with historical music in Universities such as Oxford, Denver, Reykjavik, and Bergen.
• Wardruna have over 60 placements of music in the History Channel`s hit TV series VIKINGS, in addition to substantial work on the actual music score of the show. Einar Selvik has starred and performed on the show on two occasions (in season 3 & 4).
• Together with Enslaved, Wardruna was in 2014 commissioned by the Norwegian government to write and perform a music-piece for the 200-year anniversary of the Norwegian constitution.
• First concert was held in front of the near 1500 year old «Gokstad» Viking ship in Oslo and Wardruna is the only band ever to be allowed to hold an amplified concert at the Viking ship museum.
• Performed sold out shows worldwide, including major festival headline appearances (Red Rock Amphitheatre, Castle Fest, Hellfest, Summer Breeze, Roadburn, Echoes & Merveilles, Rock oz Arenes, Rock the Coast and many more)
• Independently self-released 3 albums
• Billboard World Music No 1. in the US and Canada
Wardruna discography:
Runaljod – gap var Ginnunga (2009)
Runaljod – Yggdrasil (2013)
Runaljod – Ragnarok (2016)
Skald (2018)
Kvitravn (2020)
________