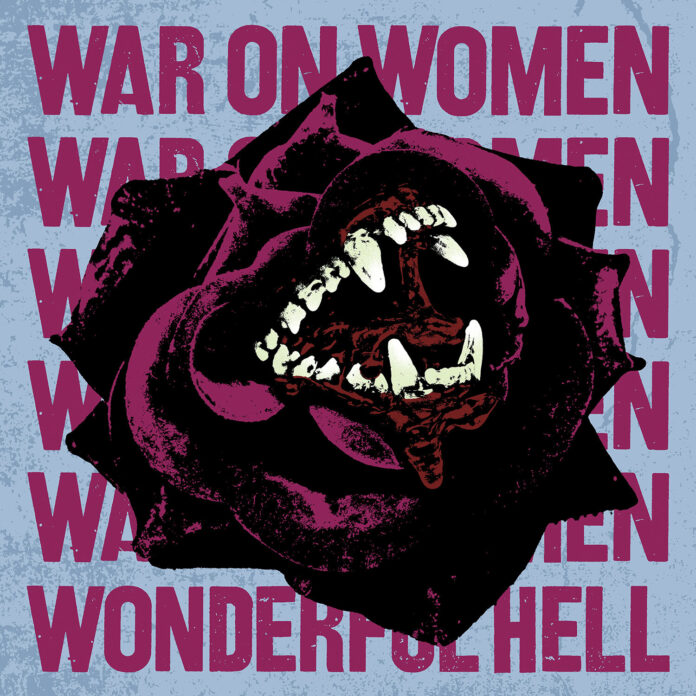 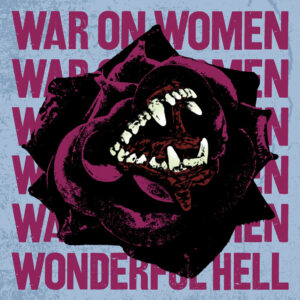 Five years on from their first album in 2015, the follow-up to the second (2018) rages just as hard but Baltimore Feminist Hardcore band War On Women seem no closer to denting the mainstream… Ged Babey decides its the music holding them back rather than the politics.

We politely request you get your boots off our necks…

War On Women are fucking great, don’t get me wrong… but the more they progress musically as a tight, musicianly unit -lots of interesting chord progressions and time changes – the less the message comes over. They don’t wanna be a dumb 3-chord punk pop band obviously, but for me, they go too far the other way. Interesting progressive metal riffage and hardcore dynamics will not bring down the patriachy…. in my opinion. They still need their definitive anthem and good as White Lies and Wonderful Hell are, they are not gonna win them as many new fans as they need.

…and if the bastards grind you down, become a diamond.

A lot has happened since War On Women burst out of Baltimore’s activist community in 2010 as an unapologetically intersectional feminist hardcore punk band. In their early days, even some of their peers found their politics “extreme” but in the years since, feminism has undeniably gone mainstream, as evidenced by the #MeToo and #TimesUp movements and superstars like Beyonce incorporating it into their personal brands. There’s also been backlash, from the growth of the alt-right out of misogynist message boards, to an actual rapist landing in the White House where he’s spent the past four years pouring gasoline on the flames of hatred and division, rather than striving toward unity.

That’s all to say, that in the midst of this tumultuous period of American history, and especially with the crucial 2020 election looming on the horizon, War On Women’s unrelenting vision and ferociously vital messages are more necessary than ever before.

Their new album Wonderful Hell (out digitally October 30th + physically on November 13th via Bridge Nine) is a call to action, even when every step forward feels like it’s met with a landslide back. The title track, which unintentionally echoes John Lewis’ notion of “good trouble” as a catalyst for change, emerged during a period when vocalist/lyricist Shawna Potter was feeling exhausted and overwhelmed by life in the Trump era. “I think it expresses something that a lot of people are feeling. Like, ‘Okay, we had our moment. Now it’s time to get back to work. We can’t let this happen again. We can’t endure another four years of this,’” she comments.

Recorded with the band’s guitarist and co-founder Brooks Harlan alongside J. Robbins at his Magpie Cage Studios in February 2020 and completed in April (when in a COVID-19-free timeline the band would have been on tour with Bad Religion), Wonderful Hell is the first War On Women album to feature the band’s current lineup of Potter, Harlan, bassist/vocalist Sue Werner, guitarist/vocalist Jennifer “Jenarchy” Vito, and drummer Dave Cavalier. The record opens with the explosive “Aqua Tofana,” which references the notorious 17th-century “husband killer” poison, and pokes fun at misogynists who’d imagine feminist musicians as jonesing to destroy all men, rather than convert them to the cause. But as War On Women mix lines from Shellac’s classic vengeance plea “Prayer to God” with their own, it’s easy to imagine their brutally tongue-in-cheek barbs could get MRAs shaking behind their 4chan screen names.

Wonderful Hell ‘s steadfast rager “White Lies” is a takedown of systemic racism and those who complicitly watch—and even benefit from—institutions that openly favor one group over everyone else, while “This Stolen Land” confronts the gall of leaders who declare refugees and migrants “illegal” as they govern from land violently seized from Native Americans. And like War On Women’s previous albums, Wonderful Hell includes plenty of songs that aim straight at the jugular of gender disparity. “Her?” lists the petty but politically lethal criticisms leveled at woman who dare to be visible in public office, while “In Your Path” takes on gender-based violence with lyrics adapted from chants introduced by Chilean grassroots feminist collective Las Tesis.

Like the title track, the anthemic “The Ash is Not the End” and the magnificently slow-burning closer “Demon” acknowledge the natural feelings of wanting to give up or self-destruct in the face of insurmountable adversity—feelings Potter says she has experienced herself. “In those songs I’m giving myself the advice to keep fighting. I’m just hopeful that someone else who needs to hear that message will find strength in it, too,” she says.

But while War On Women offers listeners space to vent their anxieties and frustrations, they ultimately challenge them to find their inner strength and build the world they want to live in rather than burn down what’s left of this one. “The thing is, we don’t have a do over,” Potter says. “We don’t have a time machine. We can’t snap our fingers and start from some other place. All we have is right here, right now. So what can you do right here, right now, to help?”

So take a breath, recharge, and then join War On Women— because it’s time to raise some Wonderful Hell.