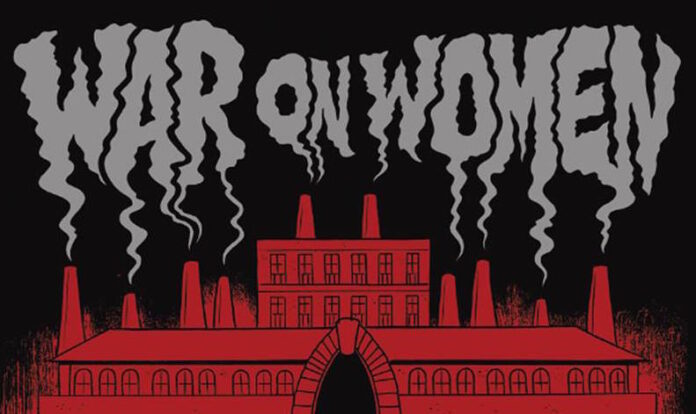 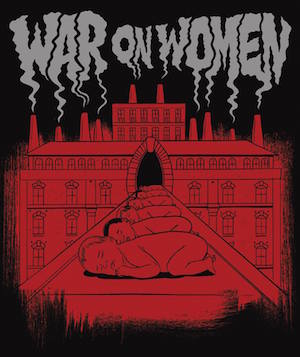 Laura Jane Grace of Against Me recommends War On Women with the words “Fuuuuuck!!! New favourite band, War On Women, from Baltimore, MD. So good.” They describe themselves as playing “hardcore punk made by some Baltimore Feminists”. Before reviewing this, their debut self-titled album, Ged Babey, re-reads his old copy of SCUM manifesto.

Touring hard  with Propaghandi and getting praise from Laura Jane Grace has lead to this album being called ‘one of the best hardcore/punk albums of the year’ already in certain circles. Deservedly so.  It is a proper protest-and-survive, mean-it-man, ideals-first punk-rock album.

Probably my favourite, and definitely the most immediate track on the album is one of those throwaway ideas probably decided on over a beer.  “Lets write down all those negative You-Tube comments under our videos and turn them into a song?”.

Simple.  And its brilliant and telling.  It turns all the trolling nasty, spiteful, sexist. mysoginist comments into weapons of war to use back at the perpetrators. And its funny as fuck. It makes them all seem like insecure little Beavis and Butthead keyboard warriors. You can listen to it here…

Ranging from “the song is decent but the lyrics are laughable” to “I wanna pork the vocalist” and “I can’t work out if they are crazy feminists or being ironic” to the last line, the vile and shocking. “I’d love to slit a womans throat and gorge myself on the blood that pours out of the wound”. 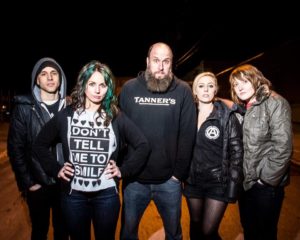 It shows that their is indeed still a War On Women even in the sphere of punk rock.  But it just serves to make them stronger and more determined.

Twelve tracks of mid-paced to fast hardcore punk with nods to metal and no-wave, its a fine debut that pulls no punches and makes no concessions to radio-friendly unit-shifting.  Musically its quite old-school US hardcore but with a feel of Conflict type anarcho; in that the music is framed around the lyrics rather than vice versa.  The guitarists don’t hide their love of chunky downstroke thrash metal but avoid widdley-widdley solo’s thankfully.

Its the lyrical content which is striking though, from rape, sexism, transgender rights, immigration rights, pro-life issues, it covers the whole gamut of issues affecting women in the US and does it with targeted rage.

An album well worth getting hold of and a band to look out for on future tours judging by the live footage on Youtube.

This is an older video of a track from their previous Improvised Weapons EP and is not on the new album .