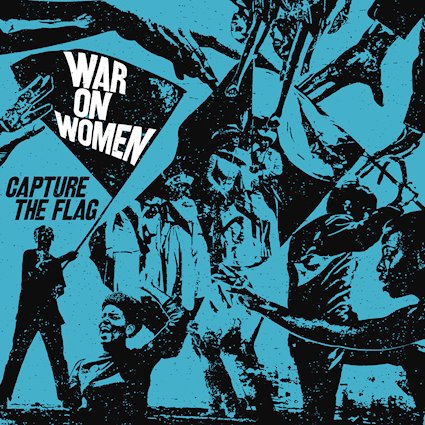 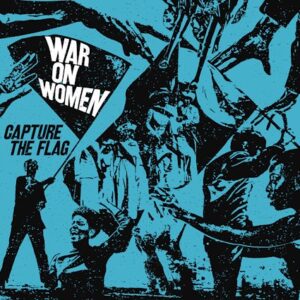 Second album by mixed gender Baltimore rock band and an articulate but raging American Feminist hardcore punk manifesto says Ged Babey. Who adds; ‘As a 54 year old male from the UK I can only imagine the galvanizing effect this album will have on young American women who hear it.’

Probably the single most important album to be released by a rock band from pussy-grabbing Trumps America, post-Weinstein, post-Florida school shooting… this or any year for the past five.  (Or since their debut at least)

But is it a manifesto you can dance to?  Well, yes. But in a very frantic, physical, flailing, head-banging, moshing kinda way.  This is a hard and heavy metallic KO of a record.  It’s a hardcore meets thrash metal album which musically at a full-volume, gut-level will appeal to punks, skaters, rockers, thrashers, moshers ( as well as the socially-aware..) And when you think of that target audience, we are talking about a lot of teenage boys/young men… and judging by the vociferous few troll-boys sung about in ‘You-Tube Comments‘ from the previous album – and the ones still there today, slinging abuse at the band, they will be, metaphorically, the toughest nuts to crack.

There are many different ways of combining music and the politics of resistance : sugar-coated subtlety can succeed but it I think it works at its very best when both elements are cranked up to the max.  Personally, of all the bands who have ever done this, I would say that UK activist punk band Conflict are the band that have combined the two with maximum ferocity and to maximum effect; throat-shredding rage, full-throttle, dynamic music that encapsulates the anger and intent behind the uncompromising, purposeful lyrical content.  The two go together and become an inseparable one -wordsandmusic – and are an inspiration.  It’s a cliche  maybe, but ‘a call to arms’ electrified by the music.

After hearing and reviewing War On Women’s debut LP I have always thought that they are one of few other bands which come close to doing the same. (I’m not saying WoW actually ‘sound-like’ Conflict by the way).  There is no reason why War On Women shouldn’t reach the level of popularity and success that Rage Against the Machine did…. only they need their own ‘Killing in the Name Of’…. YDTMHTL is almost there, but maybe a bit too ‘hardcore’ to crossover.

You don’t tell me how to live! is an anthem for female youth -but addresses all genders and ages “Don’t insult me with fake concern” – and is a metal-plated riot grrrrl anthem – which should make a dent in the mainstream  if it gets the coverage and radio-play… but  I fear it will not.

They have a potentially huge audience across America (and worldwide); the young #metoo, Occupy generation…. or at least the ones who like their music hardcore and raging.  There is a bit of a widdley-widdley downstroke Metal element which some may find off-putting if they’ve been used to comparatively gentler protest music but there is no denying Shawna Potter and the bands sincerity and commitment. And there’s no better way to soundtrack it.

There was much kerfuffle when War On Women were involved in (offstage) protests on the Vans Warped tour, when comedy-sexist punks the Dickies were shown up as being silly old-timers stuck in a cartoon timewarp.  And this will be played out time and time again as the Macho Punk Old Guard refuse to accept that what War On Women are doing is not a game or a pose or ‘PC BS’ – they are Activists and Artists with a clearly defined agenda rather than mock rebel rock’n’roll stances.

(Online among my circle of  friends ( punks from various ‘scenes’) the disagreements about ‘Punk Police’ and ‘Safe Space PC bollocks’ crop up time and again… and the perennial whipping boys defended each time, the Anti Nowhere League. This is symptomatic of a widening  ideological gap -rather than generation gap- that has been there in ‘punk’ for some time now. And its not ‘young and old’, more Social Justice Punk versus Punk as Fuck punk…. and this album will only fuel that ongoing long-running debate.)  (This from the press release).

As is their modus operandi, War On Women have not stopped at the music. Capture The Flag will also receive its own college-level companion workbook. Inspired by the academic community’s fervent embrace of their self-titled record, War On Women have decided to not only join the conversation, but also facilitate it. This workbook—which will be available for preorder with Capture The Flag—includes a lyric sheet and song dissections, relevant quotes, a reading list, directory of resources, and national support hotline numbers.

War On Womens lyrics are much more than catchy sloganeering.  They are complex and poetic in places and struggle to scan and fit the music neatly, simply because there is so much they feel they have to say; something which Manic Street Preachers did.  Which is why the lyric sheet and  ‘workbook’ are necessary maybe.  This will of course only serve to alienate and amuse their detractors further.  But hey, “Our existence / is our resistance /  and your fear of us /  is our ammunition”.  So that’s them told.

There are some great song-titles like Dick Pics, Divisive Shit and The Violence of Bureaucracy which set out their stall before you listen to a note.  War On Women, despite the rad-fem politics do have a sense of humour that is apparent in the odd bit of lyrical irony. Shawna Potter has a great way of delivering a lyric.  Not necessarily a great singer but a superb vocalist and rabble rouser.

I never wanted to be, never thought I could be, I’ll never never be a quiet woman    (Silence is the Gift)

Musically, they are not three-chord thrash and not Fat Wreck or Epitaph style. They hark back to more difficult ‘progressive’ hardcore (the early ’emo’ stuff perhaps) of Dischord – but Capture the Flag has a modern dynamic hardcore sound and gels perfectly with the raging articulacy of the songs.

Your existence should not be defined by any man /  You deserve to know yourself before anyone else gets the chance.               (Pleasure and the Beast)

I am not War On Womens target audience, yet I find their album thrilling and inspirational as a male Brit over 50. How it must sound and feel to the Rebel Girls (and girl/boy revolutionaries) of the USA, I can only imagine.  God Bless War On Womens America and the ones making a stand to re-capture the flag for justice, freedom and equality.