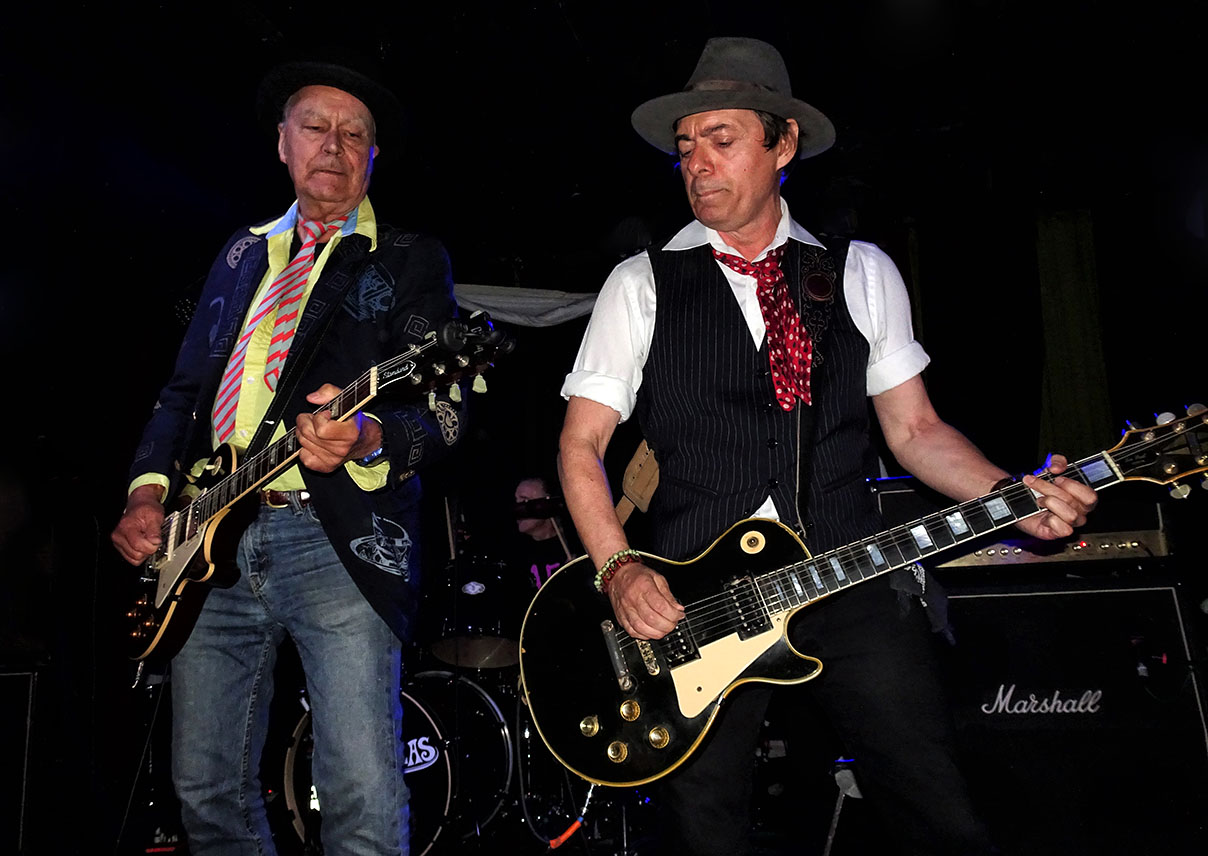 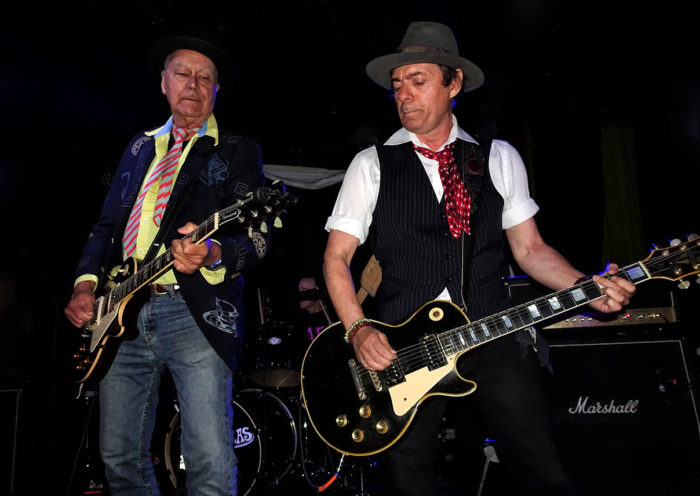 Walter Lure first ventured onto UK soil with the Heartbreakers in 1976 as part of the legendary, yet ill-fated anarchy tour with the Sex Pistols taking the lead. Essentially the Heartbreakers, also comprising Johnny Thunders, Jerry Nolan and Billy Rath, were continuing to fly the flag that had been raised a few years earlier by the incarnation of the seminal punk band the New York Dolls. Whilst the Dolls were at the time criminally under-rated and achieved little commercial success, their influence and musical reference point continues strongly to this very day. Upon the Dolls untimely yet inevitable demise, Thunders took little time in maintaining the momentum by forming the Heartbreakers who very quickly gained a reputation as one of the most vital bands of that era and there is no doubt they took the UK by storm from those very early shows they performed.

Whilst the Heartbreakers themselves did not last too long until they also imploded, they left behind in LAMF one of the most defining albums of that whole punk explosion. Released in the Autumn of 1977, the fact that the final pressing of the album delivered such a muffled sound has been well documented in the past and ultimately led to the self-destruction of the band. But the quality of the songs it contained is undeniable and it has always been in a live context that these songs have really come alive and been truly energised, whether with or without Thunders at the helm. Walter Lure’s role in the band and influence on the sound should never be underestimated and it is truly fitting that, as the only surviving Heartbreaker, Walter continues to perform these great songs in the manner in which it was always intended. 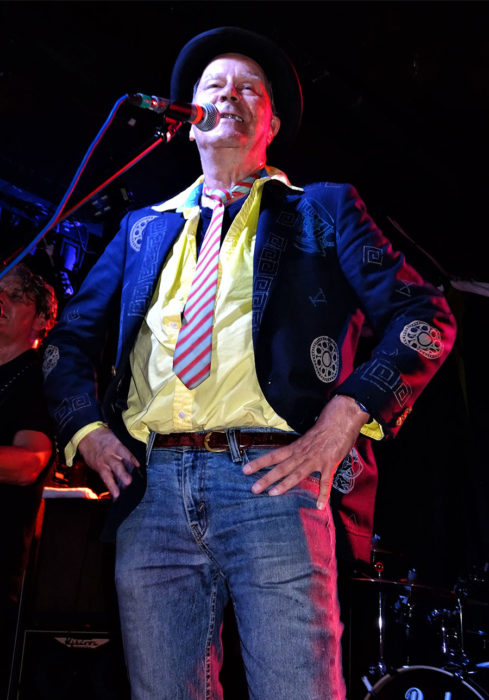 Walter has always said that he is happy to play shows so long as he gets paid for it, whether that be at home in the USA or abroad. We have been fortunate that Walter has made several sporadic visits to the UK over recent years, the last one being in 2015 which included a gig at Manchester’s Soup Kitchen. He has always performed a set covering all aspects of his career, including classic Heartbreakers material, songs from his solo albums and other songs which have always formed an important part of his band’s live repertoire. Given that 2017 was the 40th anniversary of LAMF, Walter gathered together a stellar band comprising Wayne Kramer, Clem Burke and Tommy Stinson to celebrate and release a DVD to mark the occasion. Subsequent tour dates also enlisted the talents of such as Glen Matlock and Mike Ness. Tonight within the modest confines of Rebellion in Manchester, the LAMF tour has finally arrived in the UK, this time with Mick Rossi (Slaughter & the Dogs) on guitar, Mark Laff (Generation X) on drums and Nigel Mead (The Duellists) on bass.

The make up of the band is a truly inspired choice. Of course Walter leads the line throughout, setting the context to many of the songs, but Mick adds a classic vitality to all the songs with some superb guitar playing, Nigel provides rock solid bass lines, and Mark L.A.F.F. (as his t-shirt so aptly announces) proves once again that he is one of the most talented drummers on the circuit providing a strong backbone to hold the proceedings together. Not only do we get a large proportion of the LAMF album, but Walter also samples his excellent 2018 album Wacka Lacka Boom Bop A Loom Bam Boo – his first new album in 24 years which is full of 1950’s rock’n’roll influences, and we get two songs from Slaughter’s fine back catalogue.

The DeRellas set the tone for the evening with a great set full of fast paced, Ramones fuelled rock’n’roll attitude which proved they were not a band to miss. Then after a short turn around we moved straight into the main event as Walter appeared in his familiar red and white tie. The band immediately hit their stride with a classic version of One Track Mind, quickly followed by All By Myself. Then it was Mick’s turn to take the vocals on I Wanna Be Loved and his own composition Situations, by which time the crowd were really getting into the vibe, before Walter again took the lead on Crazy Kids from his latest solo album. Walter then observed that in any relationship you should always sit back and reflect, which allowed the band to slow the pace somewhat and deliver a Ray Charles blues number Busted, a song which has formed a part of Walter’s setlist for many years now. 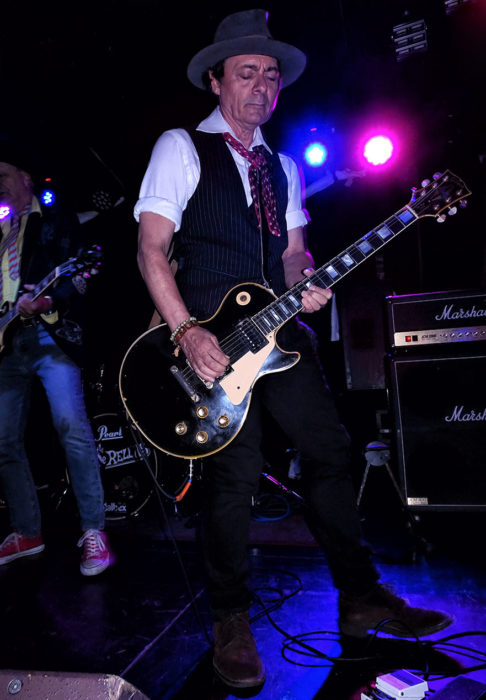 Mick stepped forward again to deliver Slaughter’s Stranded and also take the lead on the always iconic Pirate Love, which allowed the two guitars to play off each other as the temperature in the packed venue seemed to turn up a notch, as Walter himself observed. London Boys prompted Walter to recall Johnny Thunders annoyance at the Pistols put down of New York through the song of the same name. Walter then seemed amused that a song that “he wrote 400 years ago” seemed more appropriate today than it ever was as the band launched into Get Off The Phone, and we all know what he means by that.

The main set finished with the classic rock’n’roll trilogy of Born To Lose, Dee Dee Ramone’s Chinese Rocks and Too Much Junkie Business, “a song in the same vein but in a different arm” which could also be the Heartbreakers theme tune. Of course the band were not allowed to leave it there as they returned with their own interpretation of Waiting For The Man, a song previously covered by Slaughter back in the day. Given Walter had now broken a guitar string, the band finished with Do You Love Me? with Walter purely on vocals leaving Mick to cover the guitar parts. The answer to that question was obvious and proved a fitting end to a great night.

Walter Lure’s long standing alternative career on Wall Street may now be a thing of the past as he ventured into retirement in 2015, but fortunately for us all his passion for continuing to make some of the music that defined a generation continues unabated as we witnessed tonight in Manchester. Whilst the average age of band members and audience alike might be rising steadily, notwithstanding an obvious attraction of the music to a younger element of the crowd that was in evidence tonight, the passion and influence of the songs performed tonight remains a constant and it was clear from the reaction of the audience that they did not want it to end. It’s just great to see and hear that the rock’n’roll legacy of the Heartbreakers is still intact and remains in very good hands.