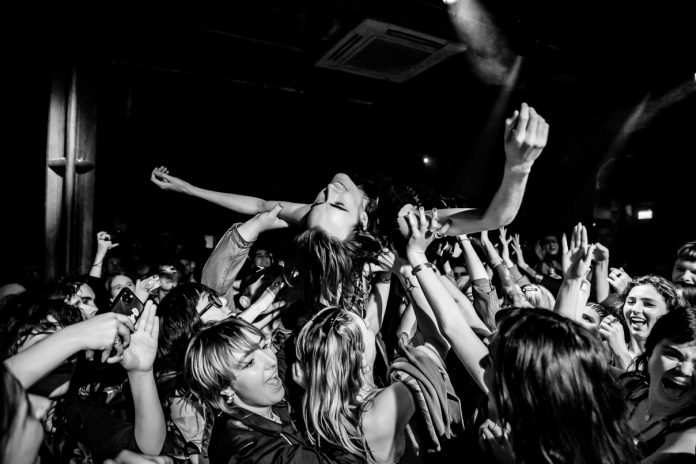 “Is this the start of a New Romantic revival?”, asks Keith Goldhanger. Probably not but a night out in East London watching Walt Disco certainly reminded him of something.

Sandwiched discreetly somewhere in between the rumblings of post Punk and the start of a music genre that many now know and accept to have been labeled as ‘Goth’, were a bunch of bands and music fans inhabiting clubs that some filed neatly under the term ‘New Romantic’. It was a scene that soon got taken over by the likes of the bands championed by the ‘Smashy and Nicey’ DJ’s on wonderful (their own words) Radio One that still gather together along with their thousands of followers today to celebrate what was quite possibly the worst aspect of music in the early ’80s.

This is where Walt Disco may have resided if they’d been alive back then.
Not with Spandau Ballet, Howard Jones, or the Haircut 100’s and their ilk but alongside the fucked up arty spectacle of The Virgin Prunes (Walt Disco don’t sound like The Virgin Prunes), The Associates (they do sound a little like them) or Christian Death (ask your dad). Back in 1981 Walt Disco would quite possibly have been ignored by the mainstream media despite making much better and more exciting music. This androgynous band from Glasgow remind those of us old enough of those golden innocent years when we’d wander along to see bands splattered in make-up and wearing clothes they probably wouldn’t wear whilst popping out for a pint of milk on a Tuesday morning. They’re the band we’d have loved to have seen on Top of the Pops back then alongside AB bloody C  or Tears for fucking Fears Just to add a bit of spice and mischief to the music that seemed to have been forced upon us pre-digital (especially after that three hour Neil Young live cassette someone would take into work for when the only radio station available seemed to be getting too much).

Walt Disco are better than these bands ever were. They’re not over serious chin stoking middle aged men for a start which is often a good sign, they prove tonight that they know how to provide the theatre, the industrial foot-stomping pop music that anyone over 15 will love and they seem to succeed in not making this one of those terrible ‘Rocky Horror’ type spectacles that would have some of us running towards the nearest cave to sit in until it all blew over if they did.

When Walt Disco first arrived on our doorstep three or four years ago alongside the equally superb HMLTD (and were a match made in heaven) we hoped they’d eventually provide some fabulous songs to go with their look, attitude, and the sound they were making. Thanks to their wonderful debut album Unlearning released this year we now know they do have the songs and with this full package now come the punters. One or two themselves having dressed up for the evening (mind you we’re in Shoreditch …) and more than one or two singing along, laughing along and dancing along to the spectacle in front of them. We get to wave our arms in the air and clap along during the anthemic choruses they provide us with and once or twice we’re even told the words to shout during the thunderous Glam Rock moments we came to expect.

A few days after some of us have only just recovered from watching a 74-year-old Russell Mael swinging his pants for two hours this band tonight show us that they too are as artistic, funny and as talented as the Sparks brothers. Moments of synchronised running on the spot and attempts to climb on top of anything above head height keep us entertained throughout. Keyboards are at a minimum but are an integral part of the band’s music and along with the sharp guitars it’s the voice that bellows out from the front that maintains our attention and commands the room we stand in tonight. The people we used to jump over tube barriers in our best going out clothes (our only going out clothes) to see as teenagers, hero’s who never seemed to get the attention we thought they deserved are brought to the forefront of our minds again. Klaus Nomi, Sal Solo, Billy Mackenzie (I know we’ve already touched on this already) were the real heroes of the New Romantic scene some of us believed back then and today we have James Potter with his strong Glaswegian accent introducing songs that many of us have recently fallen in love with just as many more people will learn to love too in months to come no doubt.

These are the kind of blokes that builders in transit vans will be shouting at in 2022 as they cross the road. The Scary monsters and super creeps of today, as hard as Dexys, as glamourous as the Ant’s (and Adam) and with a wry smile as they rip across venues in the UK that are usually occupied by jean wearing, chest-beating, posh speaking, stage diving, parent loving gangs that make equally impressive sounds to keep our minds on the level we need them to be on. Walt Disco just also happen to have the pop star credentials we often recognise as having gone astray a little over the past few decades.

For a new generation of music-loving fans Walt Disco provide a new form of beauty. Not just in the visuals but with this whole selection of songs we experience tonight.

Support band PRIESTGATE deserve another mention too. These were first spotted earlier in the year and are arguably at the same level that the headliners were at when they first came to our attention. Billy Mackenzie (him again) type vocals and screaming guitars are enough to get us excited and eager for a few more bands of this flavour to arrive again, to provide the sounds of the 21st century with a similar backdrop to that we remember many years ago and to give us an excuse to blast out Baby Turns Blue or Pagan Love song at ear splitting volume again.

Of course, if this does happen many will be at the bar, tutting loudly and mumbling about it not being as good as the first time.
Which is wrong of course.
This could be better.
We have the technology to seek out new trends, new civilisations and to boldly go where no non-binary person has gone before.

To cut a long story short; More of this please kids.

Words by Keith Goldhanger. More writing by Keith on Louder Than War can be found at his author’s archive. You can also find Keith on Facebook and Twitter (@HIDEOUSWHEELINV). Photos by Paul Grace. Paul is on Facebook, Twitter, Instagram and his websites are www.paulgrace-eventphotos.co.uk & www.pgrace.co.uk