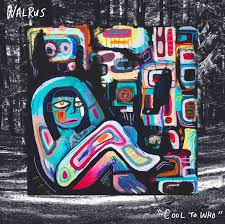 Walrus – Cool to Who?

Are the stresses and strains of 21st-century living are getting to you? Do you feel the need to escape the daily grind? Then find yourself a secluded spot, lie back and shut out the outside world. Ensure there is no chance of distraction and let the chilled out laid-back sounds of Walrus’s new album, Cool to Who? wash over you restoring your inner peace.

As vocalist Justin extols on the opening track, “It feels good to breathe again” – doesn’t it just? We all deserve some breathing space. The delicate charm of Breathe gradually envelops you allowing you to drift off and let the weight of the world lift from your shoulders safely cocooned in the warm fuzz.

While the pace of the album kicks off in this blissed-out nature, the rest of album isn’t all as slow-paced and ballad-like. The tempo and level of fuzzy sweet riffage rises and falls throughout the album. However, even when the pace is stepped up on several songs, like the title track and lead single, they retain a tender trippy charm throughout. The likes of the jangly guitars on Half Smoke nestling comfortably in its overall laid-back psyche pop groove.

Then you have the delicate tenderness of songs like the slow burn of Marcel. A song so intimate and personal it feels almost rude to listen in company. The fragility of the human psyche is explored in the 1960s psych-pop of Mr Insecure which owes a debt to The Beatles at the height of their psychedelic period.

The fuzz guitars and addictive melodies continue into tracks like Played Out and the acoustic-led Ballad of Love (or Something) layering up the instruments to a lush warm climax before Out for a While reveals itself as a beautifully nonchalant reflective torch song.

As you near the end of the journey, you are roused somewhat by penultimate track. The title Bored to Death is misleading as it is one of the most energetic and uplifting songs on the album with a sweet underlying bassline. Anymore rounds things off nicely with an infectious chorus, allowing you the chance to shake off any excess baggage, “I don’t need to anymore…”, refreshed and ready to face the world again.

Beer named after The Fall