Categorise American Hi-Fi at your peril; despite coming to prominence just as pop-punk and nu-metal were shredding into the charts, the four-piece were a much more complex beast than that. Taking the razor-sharp riffery of Metallica, the chordal colour of Cheap Trick and the anthemic croak of Oasis, American Hi-Fi were a smorgasboard of influences, while still remaining original and exciting.

Their self-titled debut album, released in 2001, slotted in to the sounds of the era (think the bubblegum crunch of the returning Weezer, the heavy melodies of Foo Fighters and the tomcat cracks of Blink 182) and thus became a critical and commerical success upon its release, but fifteen years on from its release, it holds up as a satisfying record that stands up on its own terms.

It was no surprise that the album would be a loving tapestry of myriad influences; frontman Stacy Jones had already served in two of Boston’s most prominent rock bands, Veruca Salt and Letters To Cleo. His drum work had helped both bands carve out a niche in their brands of molten, grungy power pop, but with American Hi-Fi, Jones had a chance to take centre stage, bringing his rich back catalogue and record collection along with him. After ditching the original band name, BMX Girl, Jones decided upon American Hi-Fi after the name was suggested by a certain Keith Richards (perhaps this is why Jones oh-so-subtly homages ‘Sympathy for the Devil’ on the jagged pop of ‘Blue Day’). 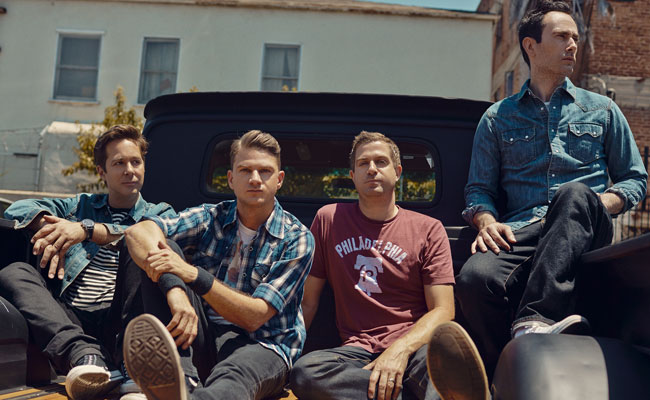 The album’s main style, though, is a combination of jet-black, bludgeoning guitar motifs and Jones’ endearing rasp. ‘A Bigger Mood’ and ‘Scar’ were propelled by Brian Nolan’s frenetic drums and Jamie Arentzen’s molten fretwork, juxtaposing bleakly brutal verses with colourful, ascendant choruses that bought to mind Bob Mould’s ‘pop’ period in Sugar. “It’s hard to be your scar, and be cool like you,” spat Jones on the latter, but his energy betrayed any teen angst on display. Even better was the album’s standout single, and AHF’s best-known track, ‘Flavour of the Weak’, a soaring, sing-a-long chorus matching a cheerfully silly guitar solo straight from the Cheap Trick book of power-pop.

Elsewhere, the sugar-rush of sirens and effervescent harmonies of Fountains of Wayne reared their white-collared head on the chugging contemplation of ‘I’m A Fool’, one of American Hi-Fi‘s purest slices of pop. Opener ‘Surround’ is where Jones’ love of In Color really came to the fore, an arena-sized slab of bombastic alternative rock, while second single ‘Another Perfect Day’, whose video included US sitcom staple Patton Oswalt as a fatigued hot dog mascot, addressed the anguish of a million millenial adolescents through its Oasis-esque acoustic strums, Jones’ delicate shout and Arentzen’s lofty guitar solo. It showed that beneath the hard riffery was a band adept at articulating their emotions through more subtle mediums, something they’d try later on in the epic closer ‘Wall of Sound’, which mixes tense introspection with taut blasts of four-stroke fuzz.

Sadly, American Hi-Fi struggled to repeat the success of their self-titled album, largely because Jones’ love of referencing caught up with him – ‘The Art of Losing’ and ‘The Break-Up Song’ both shamelessly pilfered from Kim Wilde and Blink-182 respectively, while 2005’s Hearts on Parade felt a tired attempt at remaining relevant. Ironically, they became much more durable, and enjoyable, when they stopped trying – 2014’s comeback album Blood & Lemonade was a commendable collection that matched their debut’s intense, but intelligent, intertextuality.

This year, Jones and co released an acoustic version of American Hi-Fi, peeling away the chunks of distortion to reveal an album that has beauty in its minimalism; fifteen years on, American Hi-Fi continues to give Jones credence as a highly intelligent performer.