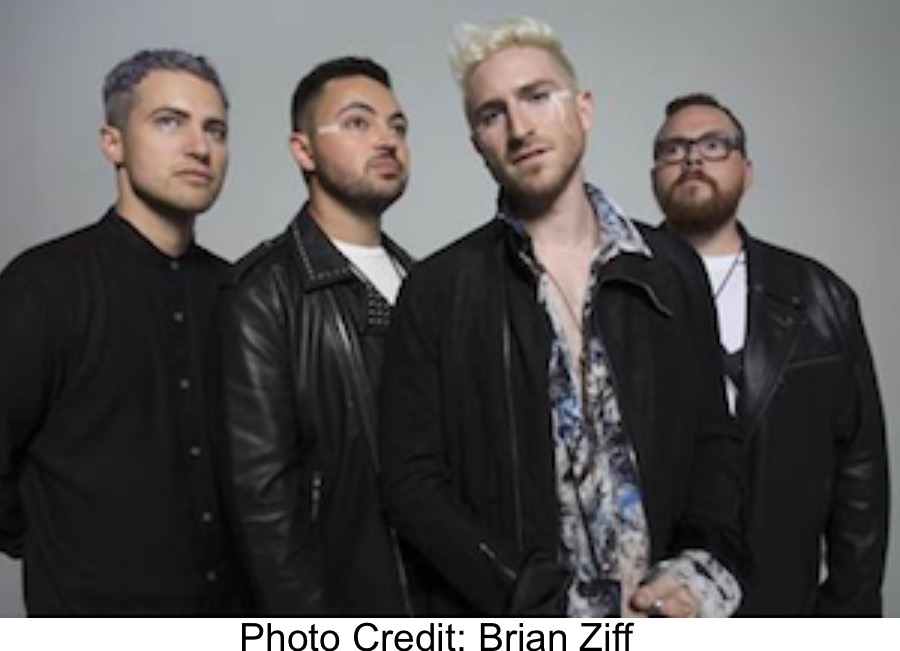 Interview: Walk The Moon: “Shut Up and Dance” – Eileen Shapiro

From the band that released the enormous internationally popular track, “Shut Up And Dance”, Walk The Moon, comes a brand new explosive hit entitled, “One Foot”, off their newly and anticipated album, “What If Nothing”, released via RCA Records. The Cincinnati faction skyrocketed to fame with ” Shut Up and Dance”, which earned them two Billboard awards in 2016, and a nomination for an MTV Music Video Award.

After recently performing on the Jimmy Kimmel show, they have embarked on a huge North American tour and are now preparing a massive UK tour in April.

Members include: Nicholas Petricca, singing lead and playing keys, Kevin Ray on bass, Eli Maiman, the guitarist and Sean Waugaman on the drums. After releasing their anthemic global hit “Shut Up And Dance”, and being nominated for everything under the sun, “Walk The Moon”, continues their success with “One Foot”, a glowing tribal essence of rock and great music. I spoke in depth with drummer Sean Waugaman regarding the early years, their compelling rise to glory and their future endeavors….

Louder Than War: What was it like emerging from Ohio and all of a sudden being slammed with fame?

We started as a band in Ohio. Ohio is a great geographic location for a band. There is a long history of bands coming from Ohio. You’ve got Devo, Bootsy Collins, Marilyn Manson, and all those people. But just touring wise it’s a great location, you can get to New York, and anywhere on the East Coast. So we’ve been touring for a long time, and working pretty hard before we had a really big hit with “Shut Up And Dance”. So when that hit it was sort of like the volume just got turned up past eleven. We were already working hard but then we just started working harder. So it wasn’t overnight.

Maybe it wasn’t overnight, but when that came out it was an OMG hit.

If you and the band could have their ultimate stage fantasy, what would you guys need to happen?

This is an answer I’m going to come up with a day or two later, so for now I’m just going to think about this. My own personal fantasy would be to ride in on a Gauntlet with a bunch of fireworks coming off of it, and at the end of the show I just fly off and you don’t see me again. We will have to come up with a band answer.

You’re getting ready to tour the UK, have you done that before?

Yeah, we’ve been to the UK more times than I can count. We started going to the UK pretty early on in our career. We love it over there. We’ve built a great relationship with the fans.

We are just beginning touring this album that we just released. So this year is pretty much all just touring. We don’t have any plans beyond touring right now. Tour, tour, tour….

Who writes your songs?

We do. We all do, in certain instances. They are all originals.

What were your musical influences growing up… who did you listen to on the radio?

I listened to all the good rock radio, like Soundgarden, Rage Against the Machine, Green Day, that’s like all the stuff that I was listening to in elementary school.

If there was something that you could say to your fans, what would it be?

Come see us on tour.

So your live in front of thousands, what do you enjoy most about that?

The big energy RUSH. You spend a lot of time working on stuff in the studio which is a fairly sterile environment, pretty much the opposite of playing in front of people. So it is a huge rush to finally be able to show off what you’ve been working on for months shut away in a dark room.

When you travel together in a big tour bus, do you all get along, are you besties?

Yeah, sure. We don’t have our own buses yet…We got to hang out with our wives and girlfriends in New Orleans at the beginning of the year, and that was fun.

So give me a little band history. How did you meet?

Kevin and Nick actually knew each other growing up. Their moms were friends in high school, so they knew each other as little kids. I knew Kevin in middle school and high school. We played in our first bands together. So I met Nick through Kevin after they had finished college. Nick was looking for some new players in the band. We started all playing together and then Eli was a player in the Cincinnati scene and we brought him in.

How did you feel the first time you hearg your song on the radio?

It was pretty exciting. We were on tour I think in Seattle Washington somewhere. We pulled over in a band van, I think we had to get gas or something. We were almost about to turn the van off and our song came on the radio. So we sat there and then ran around the van with the doors open, thankfully nobody was there because they would’ve thought we were all crazy.

If you could perform anywhere in the world, where would you choose to play?

I mean Antarctica is a pretty exclusive place. I mean there’s not a lot of bands that have played there. That would be cool. I’ve always wanted to play on the actual moon.

Speaking of moons, who thought of the name of the band?

That came after 800 variations of the band name back in MySpace days where you pick a band name and type it in only to find out a band on MySpace already had it. So it came out of trial and error. It comes from the Police song “Walking On the Moon”, which we still get confused for. People still call us Walking On The Moon.

What can the UK audience expect out of this tour?

We’ve been preparing all this new material, we’ve been working hard the last few months, so they can expect the best show that we’ve ever done.

I heard that you were amazing live.

Most nights, I mean I hope so. We try our best.

Do you get nervous before you go on stage?

Only on TV performances. We are used to doing our shows by now, that’s our job. But TV performances are weird because you basically sit in the cold dressing room all day and then you have to go right out and play your song that you usually play at the end of the night when you’re pretty warmed up. The audience is usually pretty clearly lit far away from you and nobody is like your fan. It’s just whoever is watching the TV show that day. So those are the ones you get nervous on.

Oh yeah, I do like the way they did that. They actually have like a real concert set up there.

Who is your favorite drummer?

That changes day to day. Name a genre….

How long have you been playing drums anyway?

So why do you think drummers are so intriguing. I mean you might not even think that but they sit there way in the back and I feel like they don’t get a lot of credit. What’s your point of view on that?

Tell me the moment that the whole trajectory of your life changed.

Well I can remember when I quit my day job to go on the road. It wasn’t a very monumental thing. I worked at FedEx so I could play gigs and just sleep during the day, doing mindless tasks. Then I just told them that I wasn’t coming in anymore and they told me that if I don’t come in for six weeks I’d have to apply again.