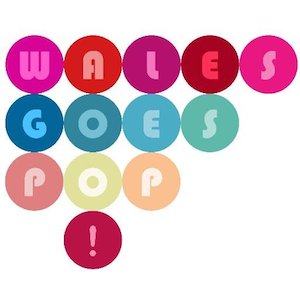 Our review of the second day of the children friendly Cardiff based music festival Wales Goes Pop. Nick Fisk keeps us up to date with his review of day two.

With my ear still in pain, the first thought for me today was to ring the out of hours surgery and get a prescription for some anti-biotics: I had finally come around to think that it wasn’t excessive listening to the Pixies at loud volumes that was causing the pain, but that I actually had some kind of infection.

Meanwhile, back at the ranch, the second question to ponder was whether it was Wales Goes Pop’s organiser, Liz’s typical modesty which had led her to putting her own band, The School, on first today? Perhaps she wanted to get back to the business of co-ordinating the festival, or just, goddammit, enjoying it? Whatever the reason, it was a shrewd decision, as surely most of the festival goers would have wanted to see The School, despite their being on so early? There could be few names among the entire festival’s line-up whose milkshake could bring quite so many boys and girls to the yard as The School.

Despite Liz, as she said, having a slightly croak voice, and new guitarist Andy having slight guitar problems, this was possibly the most confident set by The School that I’ve seen.

Liz’s skill is writing timeless love songs. Some of the words can make you feel slightly demasculated as a lad if you try to sing along. Thank God they didn’t play “I Don’t Believe in Love” or I might have found myself blubbing right there and then in the middle of the theatre at 2.30 in the afternoon.

Amongst favourites, there were 3 new songs, all of which went down well, particularly first of these, “Love is Anywhere You Find It”. Liz asked if anyone had been to a record store yet, with it being Record Store Day, with a stern look as if doing so was compulsory. 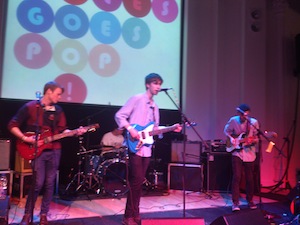 I’m someone who holds a lot of truck with good band names, and it does annoy me the number of preposterously stupid names this scene throws up. Radstewart (see photo right) is one of the good ones in my view, and they’re a good band to go with it.

Singer, Dylan, has one of those vocals that is part talking-part singing, like Jarvis Cocker, or Lawrence of Felt/Denim. The songs feature cooly ironic jibes at this or that, set to a backdrop of chiming guitars. I really think this band is potentially one classic song away from much more widespread popularity.

Simon is so-called as he was mainstay of Cardiff band, The Loves, which in fact also originally featured Liz of The School on keyboards.

Resplendent in red, Simon takes an assured lead in his own band. It’s a blend of garage rock, upbeat mod sounds and pop sensibility, with a good helping of humour tossed in. There’s the “only love song with the word diarrhoea in it”, the one about Elton John’s ex-wife, the one about his dick, and the one with the word motherf***er in it. The whole set was well received, even by parents, I believe.

I had a brief break from the music to focus on catching up with Cardiff’s vital home game with Stoke, which featured 2 penalties as it turned out – the first Cardiff have conceded this season, and the first they’d been awarded, but ultimately, a point probably won’t be good enough. 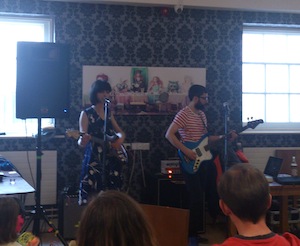 Los Bonsais (see photo right) had a sound a bit like Stereolab. The café, it seemed, was being reserved for acts of a diminished stature – I’m talking about their physical presence rather than notoriety or appeal.

Scottish band, Teen Canteen combine 60s girl group-style harmonies with a filled-out, countrified sound. Their songs of unrequited love didn’t quite float my boat, but perhaps I was still sore from the football result. The band were a bit more serious after the frivolity of some of the other acts.

Next up in the cafe was Steven James Adams. Sometimes you’ll see a musician and think, here’s someone who has definitely found his vocation, and that was the impression I had with this performer. I liked him from opening lyric, “What kind of man am I to make you do all those difficult things”through to the closing line, “Tears of happiness spill down my beautiful face.” In between, he successfully led the audience to sing, “I’ve changed my mind, I’m feeling bad about that now”. It began quietly, but with a bit of encouragement, most of the crowd joined in. I couldn’t help feeling that the Louis Armstrong quote on the back of the sound guy’s shirt, “All music is folk music – I ain’t never heard a horse sing a song” was appropriate. Steven James Adams performed two sets, but I left the festival for a break, so sadly did not get to see the second. 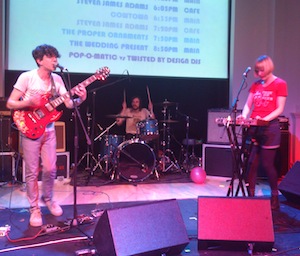 3 piece, Cowtown (see photo right) had a clattering indie sound. This was the first I’d heard of them, though they’ve been going for 10 years (I confess, I’m a little out of touch). You could tell it was a practised clatter. There were stop/start jerky rhythms, possibly evoking Mudhoney’s “Touch Me I’m Sick”, led by a long-haired drummer. A sweaty, long haired drummer is always a good sign of an energetic group. With a general not cool but cool image, as with all the best indie bands, I have to say, I really liked them.

The Proper Ornaments were the type of band I grew up listening to. Long haired again, they were a blend of Teenage Fanclub, Chapterhouse and Spacemen 3, and ticked all the right boxes. Slightly derivative it may have been, but on the flipside, you could say, respectful.

And finally, to the headliners of the night, The Wedding Present. The band had played at Spillers Records earlier in the day, as part of Record Store Day, launching their EP, sung in Welsh. It had apparently all worked out well – the EP was planned before they were booked to do this gig, apparently. 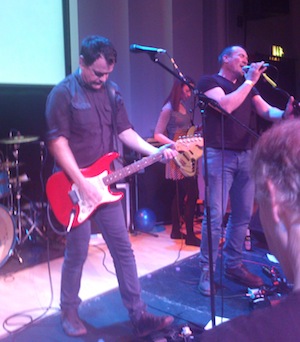 David Gedge had been present for most of the day, manning the Wedding Present (see photo right) merchandise desk in typically business-like fashion. He was still there with minutes to go before they were due on stage.

I have to say, these days, I often feel embarrassed at Wedding Present gigs. I must have seen them around 30 times – more than any other band – but my knowledge of their material post The Hit Parade is pretty miserly. I really need to spend time catching up.

I’m also always embarrassed at the manner in which I still enjoy their gigs. As soon as “Everyone Thinks He Looks Daft” kicks in – of course, they still play the classics – I can’t stop myself from launching headfirst into the moshpit. They play “Corduroy”, which I had called for, and this proves possibly the most popular.

One of the highlights tonight is when the Welsh song is played, and Andrew Teilo shuffles onto the stage, while Gedge gracefully backs down.

Towards the end, we have “My Favourite Dress” and “This Boy Can Wait”, before “Bewitched” as a finale. There is to be no stage invasion like last night, but instead, a joyous sprawl of Wedding Present fans throw themselves about like teenagers.