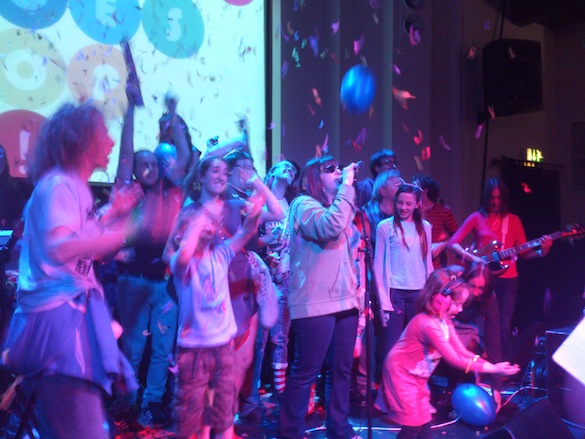 Billed as an “all-ages pop weekender” and held over the Easter bank holiday in Cardiff, Wales Goes Pop also has a great lineup featuring many artists you’ll have found on these pages in the past. Nick Fisk is our man in the midst of the action. All photos be Nick too including the one above of Helen Love and friends.

The stage was set with balloons and bunting filling the main hall of Cardiff’s The Gate. Along with stalls selling band shirts and 7”s, there could be no mistake, this was an indie pop festival, with all the trimmings! There were more bobs here than at a Robert Mitchum lookalike conference, the haircut a staple at this type of event.

Seazoo were first on, and were so loud, I feared that the eardrum I thought I’d damaged a couple of days prior by listening to the Pixies new record at too high a volume might flare up again. They exhibited unsurprising shyness and striped t-shirts, and were pleasant enough, setting the tone for what was to come. They were giving away a “Tidy La” t-shirt, and as no one else came forward, a toddler claimed it, and wore it as a dress. The organisers of the festival had kindly allowed kids for free. 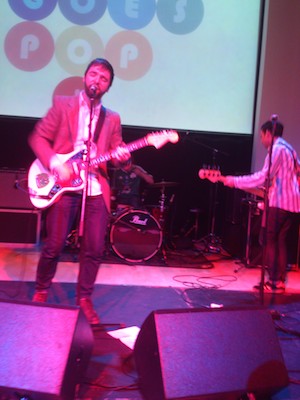 3 piece Kutosis (see photo right) had an altogether darker sound, perhaps akin to Placebo at times. A change of image also, with the singer sporting a clipped beard and tweed jacket; the bassist had on vertical, not horizontal stripes. These things matter, I think. “I wanna sleep in the day”, they sang, a homage to resting students, perhaps.

Francesca’s Word Salad was the first act in the slightly cramped cafe. Dressed like Alice of Wonderland fame, she sat, appropriately enough, beneath a painting of the Mad Hatter’s Tea Party, which adorned the cafe’s wall. The solo singer sang entertaining silly songs, such as the one where she was “always the bride, never the bridesmaid,” and killed her assorted husbands off one at a time in various amusing ways “to keep their love alive.” With a confident vocal, this was just the ticket to relieve any mid-afternoon boredom.

Back on the main stage, Randolph’s Leap, a 7 piece Glaswegian band had a slightly fey sound that got a few of the hipsters swinging their pants. This group, with a kind of innocent fun, might just sum up what this festival is all about. One lyric, “I know people like me like to judge people like me” brought to mind the time I met Julian Lennon at his Red Bar in Majorca and he said I was very judgemental. “Well, you’re judgemental for calling me judgemental!” I replied.

Young Romance in the cafe next. A two piece, with, like the White Stripes, a female drummer, and a floppy haired male singer in an attractive paisley shirt. A very nice, solid sound. One song sounded like a heavy version of Suzanne Vega’s “Luka”. Not sure if that sounds like a compliment. Genuinely, I liked them. I offered to help them with their equipment afterwards, but they said they were OK. Don’t quite know how they seemed to have enough stuff for a much larger band. 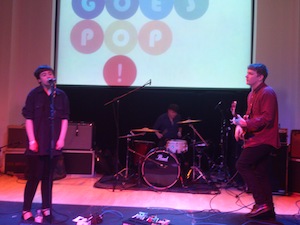 Flowers (see photo right) in the main stage really impressed me.The band was fine, but truly, this singer has a spectacularly good voice. This is a music scene that often promotes the clumsy or the unprofessional, but Flowers’ singer could win the X-Factor, and could compete with Wales’ own Charlotte Church for title of Voice of an Angel. Truly beautiful.

Christina Quesada was next in the cafe. Measuring, as she told me, 150cm tall, she is the only musician I’ve ever known to make the ukulele look like a large instrument. There was something about this performance that made me think it could have been the sort of thing Harriet Harman might have been into in the 70s. She could have been the reason the word cute was first coined, and could without doubt fit comfortably in that small side pocket you keep tablets or tobacco in.

I spoke to the drummer of Night Flowers while having a cigarette, and he described the band as shoegazery. With positive melodies, and a high waist-banded singer who jumped around in the manner of Katie of the Kabeedies, I thought they were anything but. They barely looked down, and had a sound that filled the room seductively. 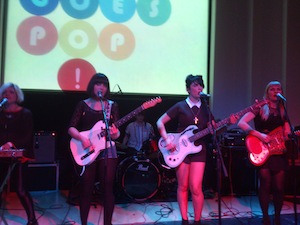 Dressed in black, the 5-piece September Girls (see photo right) are a kind of downbeat Those Dancing Days, or maybe (more obviously), an indie Spice Girls – there’s Stripy September on drums … erm, not sure if the metaphor extends much further. Despite solemn looks, I suspect they were actually enjoying themselves. Most of the audience, I’m fairly sure, were now more focused on the imminent arrival of Helen Love however.

Helen Love are a band of fans for fans. It’s a celebration of the scene itself. It’s all a bit of a laugh. All power pop fun, and only now does the crowd really get going. There are chants of “Hey Ho, Let’s Go” from the crowd throughout, especially during moments of apparent power failure. This is the sort of band that you won’t know all their songs, but the ones you do know, you absolutely love, and relish singing along with those that know the same ones. There are at least 3 songs that name check the Ramones, the band that the band are fans of. They sing “We love you”, kind of like the antithesis of The Manics’ “You Love Us”. There are a couple of attempts at stage diving early on, but this is just the starter, as during “Does Your Heart Go Boom” half the audience it seems takes to the stage, leaping about like loonies, as confetti descends from the ceiling. I remember someone at a St Etiennegig at this same venue trying to lead a stage invasion, but ending up being on his own, and being dragged off by security. Nothing like that this time, with no security in evidence – it’s just a mass of people having fun, in a real indie pop kind of a way.

Day 1 of this year’s Wales Goes Pop was definitely a triumph in all kinds of ways, and it’ll be hard for Days 2 and 3 to top it, but I’m pretty sure they’re going to have a real good go at it.