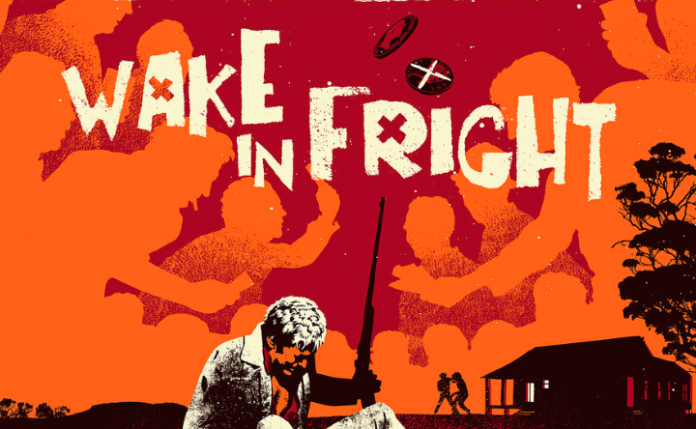 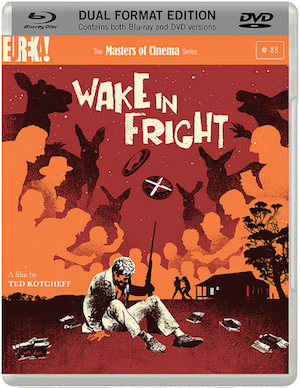 The magnificent ‘lost’ 1971 movie Wake In Fright, directed by Canadian director Ted Kotcheff, must rank as one of the best films ever made in Australia, a motion picture that ignited the Australian New Wave movement of film making later in the decade. In fact, Wake In Fright must be considered a seminal film of the 1970s, among the greatest movies produced anywhere during that turbulent, transformative decade. For Louder Than War, Ian Johnston tells us why it thoroughly deserves its theatrical UK re-release today and its exceptional duel format DVD / Blu-ray edition release by Eureka! Entertainment on 31st March 2014.

When Wake In Fright was first screened at the Cannes Film Festival in 1971, Director Martin Scorsese was deeply impressed with the picture, stating “it left me speechless.” In September 1989, singer / songwriter / novelist / scriptwriter Nick Cave asked for the film, a long held favourite, to be shown with Hector Babenco’s Pixote at the Scala Cinema in London, at a reading from his first novel, And The Ass Saw The Angel. Cave would later describe the picture as ‘the best and most terrifying film about Australia in existence.”

Unfortunately, in 1971, Australia and just about most of the rest of the world wasn’t ready for Wake In Fright. In the USA, the picture was released under the title Outback and the release mishandled. In Australia, the film was generally viewed as an assault upon Australian society and audiences stayed away. The picture drifted into obscurity, but was still lauded by those who had seen and appreciated its understated, mesmeric power. With the discovery of an old print, and extensive high-definition restoration work carried out on the picture in 2009, when the movie was again exhibited at the Cannes Film Festival, Wake In Fright is today universally accorded the plaudits it should have received in 1971.

As fresh, provocative and shocking as when it was first released, Wake In Fright relates the brief, but profoundly effecting odyssey of a middle class school teacher, John Grant (wonderfully played by British actor, Garry Bond), who is marooned in a highly remote government –enforced teaching post, named Tiboonda. Consisting of just two solitary shack buildings and parched scrub land for as far as the eye can see, it is easy to empathise with Grant’s desire to escape the teaching profession. Grant leaves by slow train from Tiboonda to Bundanyabba, from where he plans to catch a plane to Sydney, to visit his girlfriend and hopefully never come back.

Grant’s plans quickly derail soon after arriving in Bundanyabba (the real location is the isolated New South Wales mining town of Broken Hill, where George Miller’s Mad Max 2 was filmed in 1981). The teacher quickly finds himself smothered by the hospitality of the inhabitants of “the Yabba”. An overtly friendly but sinister local policeman (a career high for veteran Australian character actor Chips Rafferty, in his last performance before his death in 1971) insists that he constantly drink beer (as do most other characters he encounters) and brings Grant to a well-attended gambling event. The simple ‘Two Up’ flip coin game has all the men of the town betting their whole payment for the month on the outcome of heads or tails on two coins. At first, Grant experiences a good streak of beginner’s luck at the game. Spurred on by visions of financial freedom and leaving for good to Sydney, Grant losses all his money. His troubles are only just beginning.

Having met a doctor who has been drummed out of the profession due to his alcoholism (brilliantly delineated by Donald Pleasance, whose presence contributes to the existential horror ambience of the movie), Grant embarks on a full on drinking binge with a group of violent, wayward men, which culminates in a drunken and bloody kangaroo rifle hunt at night. This scene is still harrowing to watch today, as Kotcheff filmed an actual kangaroo cull, and then inter-cut shots of his actors as if they were shooting the creatures (Anthony Buckley ‘s editing is superb throughout the picture). Near madness and derangement ensue, as Grant painfully discovers aspects of his character he never thought existed.

Based upon the novel by Kenneth Cook, with a screenplay by Evan Jones, Wake In Fright builds a hothouse atmosphere of fever dream alienation, masculinity in crisis and ambivalent sexuality. Garry Bond’s character believes he is really above the working class inhabitants of the small outback town, but is stunned to realise that he is really no different from them. In a world where the men considerably outnumber the women, the constant physical brawling between the uncommunicative, inarticulate male characters highlights their desire for any form of contact with other human beings, rather than simply suppressed sexual urges.

When it was first released, Kotcheff’s film drew much criticism from Australians for denigrating their culture. Though the film carries the weight of authenticity in its depiction of the Outback, Wake In Fright is more a collective observation upon dysfunctional masculinity. Wake In Fright could be transposed to any remote region of the world; such is the universality of its themes.

From the impressive, 360-degree panning shot of the vast emptiness of Tiboonda (expertly executed by director of photography Brian West), Kotcheff captures the atmosphere of the terrain and the alienation of his lead protagonist, reinforced by John Scott’s memorable, perceptive score.

Once seen, Wake In Fright is never forgotten, but repeated viewings constantly reveal further depths to this incisive picture. Wake In Fright’s restoration/re-release and issue on Blu-ray/DVD is a cause for celebration for any fan of challenging, provocative cinema. Don’t miss it.

Wake In Fright receives its theatrical UK re-release this Friday, 7th March, 2014. The duel format DVD / Blu-ray edition release by Eureka! Entertainment of Wake In Fright is on 31st March 2014.

All words by Ian Johnston. You can find more writing by Ian on Louder Than War at his Louder Than war archive here.