Dublin based garage punk duo Vulpynes have, as the New Year broke announced their signing to Headcheck Records.

The Midlands based indie will release the bands debut EP in Spring – at this stage both band and label are keeping very tight lipped regarding the release other than to confirm there will be a UK tour to accompany the EP and festival dates are also to be announced. 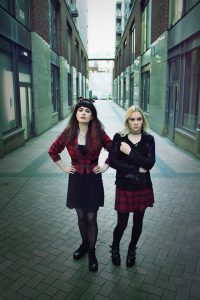 Inspired by their exposure to punk and garage rock; in a recent interview Maeve-Molly described how her mother gave her the Hole‘Pretty on the Inside’, L7 ‘Bricks are Heavy’ and Sex Pistols ‘Nevermind the Bollocks’ albums before she was even a teenager; its clear that Vulpynes have absorbed these influences, then crafted their own simple grinding riffs coupled with pummelling drums; the key though is the vocal hooks and melodies.

Check out their other material via their Soundcloud page.