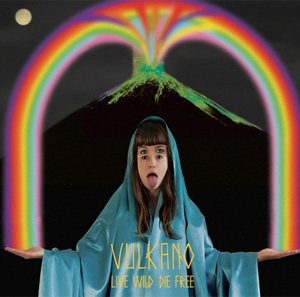 One look at the album cover for Live Wild Die Free and you can probably take a guess as to what you’re going to hear here: prog-punk with sides of self-assured riot grrrl ferocity and psychedelia.

If you were still unsure of their intentions opener Trolls sets out the method by which their statement of Live Wild Die Free will be realised. “We’re coming from the forest, we’re coming from the sea, we come from the mountains to conquer in peace,” Cissi Efraimsson chants over the gentle but insistent beat while Lisa Pyk-Wirstrom conjures a haunting synth refrain. The vocals build with each repeat of the chorus, slipping towards feral while the melody continues to promote their peaceful invasion.

The idea of feral femininity continues with Choir of Wolves. A track which opens with howls and a fairly mainstream keyboard riff, but this is still above-average punk pop; a study in carefully measured stylish joy.

The beat and percussion tumbles over and over itself as that ice-cold keyboard floats in the background of Vision Trick, but it’s with We Ride that the composure starts to slip and the barely-contained energy of this album breaks through. “You never know who’s listening,” comes the vocal, a dark paranoia balanced with the realisation that Vulkano just don’t care, are fearless in their own creative soundscape.

Too Young To Die only serves to re-inforce that this is a duo beholden of no man. A shadowy world of snow-covered sinister tales climaxes at the midway point and then spins out into machine-gun riffs and frenzied, feral, vocals.

Punk, pop, riot grrrl, whatever. There is a heady freedom about this album – full of female power, visceral imagery delivered as fact rather than to shock. This is most clearly articulated on title track Vulkano, a relatively quiet number but one which embeds itself deeply, despite the simplicity.

As we heard into the second half of the album (the whole collection packs it’s punches and weighs in a smidge over the half-hour mark) the beats become more tribal. Predatory with a dangerous glint of reckless abandon, Spider Spider, leads the way and Jungle takes it on an atmospherically funky turn with dulcet percussion joining the back beats. Animal imagery abounds in these two tracks, shining a different light on the wild nature at the heart of the heart of all these tracks.

Clap Your Bones puts the pop hooks up front and it’s easy to see how this eruption would flow on the indie disco dancefloor, around a sweating self-conscious gig crowd or through the festival tent. It manages to be both weird and accessible without being worse off for middling on this spectrum.

The album closes with Psycho Girl, a malevolence exploding into vocal violence “the angriest wolf in the shepherd’s clothing” the dire warning before disquieting lyrical scenes are revealed a top the clamorous unrelenting melodic din.

Live Wild Die Free is an album of exuberant, organic, discord proving that music doesn’t have to conform to convention to have beauty, that liberation is found in the power of punk sound.

All words by Sarah Lay. You can read more from her on her Louder Than War author profile or follow her on Twitter.