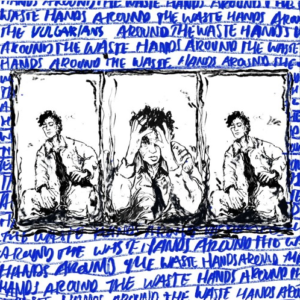 Louder than War get some lessons in melodic noise rock from Vulgarians. Ioan Humphreys reviews.

In the last few weeks I have, via Twitter, been forcibly yet gently seductively accosted by representatives of the noisy post-punk band Vulgarians.

They have a new EP out called Almost-Instinct, Almost True and it is produced by the ever prolific and excellent MJ from Hookworms. It is out on 5 May and follows a tour with fellow noiseniks The Wytches.

Opening track ‘Of humdrum consumption’ has an insistent guitar line and throbbing baseline right from the start. The yelping vocals (replete with lots of reverb) are bossy, instructing and preachy. I like that.

Layers of noise come in and the bassline only serves to aid the abuse.

Suddenly there is a breather and a breakdown in the noise. However, this is short lived as the slow quiet interlude leads way to a cacophonic end with yelping vocals and dissonant feedback.

Second track Career Dietary has a great drumbeat that is melodic, yet seemingly violent in its approach. This track is a hundred mile per hour from the yelping vocals and bassy guitar.  The crushing bassy vocals reflect the difference in melody and song writing practices across Europe?

The final track has a really nice jazzy time signature start that very quickly descends into  noisy strained vocals, noisy guitar lines and riffs and some good old fashioned noise to engulf the listener with a cacophony of blistering guitar feedback. Check these delinquents out before they check YOU out.

Hailing from 2017’s City of Culture, Hull – Vulgarians are one of the bands raising awareness of the city’s music scene on a national level, following a successful 2016 which saw them support the likes of HMLTD, TRAAMS, Weirds & Gang, and perform at The Great Escape (at the personal request of 6Music’s Steve Lamacq).