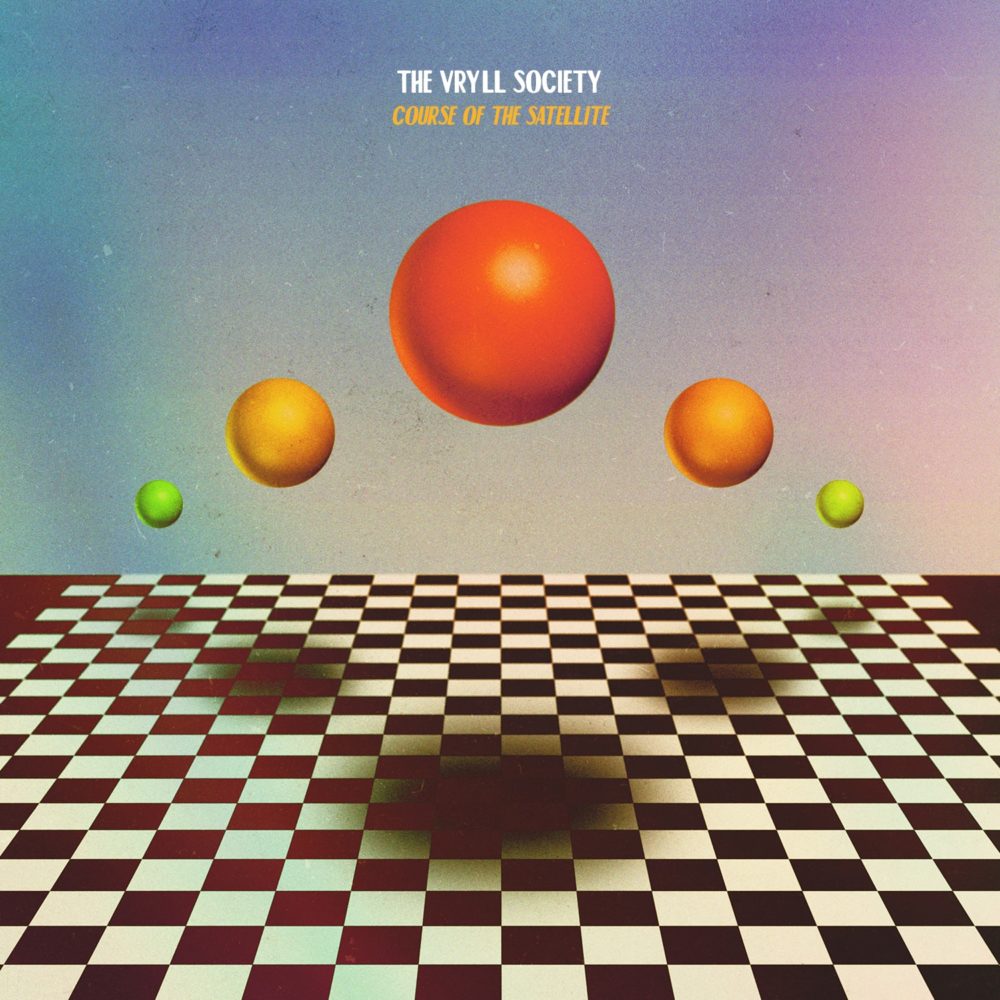 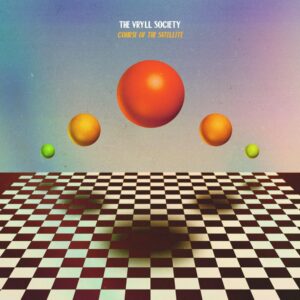 Psychedelic risers The Vryll Society who combine influences of Tame Impala and Stereolab, have recently released their debut album Course Of The Satellite via Deltasonic Records. It follows the band’s mindbending singles and their extensive touring, which has seen them become so tight and to the beat, the likes of Wrecking Crew and Booker T and MG’s would be licking their lips trying to rival their backbeat and overall songwriting skills. Matt Mead reviews the album and speaks to lead singer Michael Ellis for Louder Than War.

The album sees the band turn the clock back to the 1960’s psychedelic era, with enough waa-waa guitar to give Jimi Hendrix a battle. Starting with calming synth’s and breaking into light with soft drum beats, echoing vocals with twinkling guitar riffs in opening hypnotic track Course Of The Satellite, ‘the universe unfolds in front of my eyes’ softly sings lead singer Michael Ellis. A Perfect Rhythm is as catchy as catching a cold on a winters day, it’s inevitable you’ll catch the beat bug once you start listening, with back and forth vocals, magnificent.

Further highlights on the album are Glow And Spheres with anthemic guitars, Shadow of a Wave, goes on a mad frenzy with slithering bass, closing track Give in To Me has Michael singing ‘I need a rush that’s pure’ with angelic My Bloody Valentine swirling guitars. Overall as a debut album, it’s a belter.

ME: I was born on 06/11/1993 in Fazakerley Hospital, Liverpool. Loads of my first memories are being in my Nan & Grandad’s house, me and mum used to live there when I was a baby for a few years, I always used to watch my Grandad cook and I had this little Porsche that I used to drive around with my legs like the cars on Bugsy Malone. My first musical memories are probably hearing Definitely Maybe on tape on my Mum’s cassette player when I must have been like 2/3 and also being in the car with my Grandad listening to Creedence Clearwater Revival.

Can you remember what the first serious music you got into?

Yeah most definitely, it was The Beatles and Burt Bacharach. We always used to have parties in the garden in my mums when I was about 10 or 11 and those songs have just always stuck with me. I started to get really obsessed with The Beatles and they are what fully got me in to playing and listening to proper music.

How old would you have been at this time? Did you have any idea about wanting to be in a band?

I was only about 10 or 11 and after getting very obsessed with The Beatles and then playing guitar because of that, I kind of knew I wanted to be in a band and that would be my thing.

When did you decide you wanted to be in a band? When did you start to sing/play an instrument? What instrument did you first start to play? What songs did you sing at this point? Were you already writing your own material early on?

I must have been about 14 when I really knew that being in a band is what I wanted to be, that’s when I first got my first electric guitar and then started to get really heavily into playing. I was just learning all kinds of Beatles tunes, but some mad ones like Hey Bulldog and Everybody’s Got Something To Hide Except For Me And My Monkey. I was not writing any original material at this point.

How did you start to write your own material? How did this start to form?

I think it just naturally starts to happen, I must have been about 18 when I properly got into making my own tunes. Being in an original band you have to play original music so it kind of just comes naturally and you start throwing ideas in whenever you can.

What was the first audience you performed to? How old would you have been?

I think the first audience I played to was when I was about 15 and it was with band playing covers in some social club in Aintree I think, we only played for like 15 minutes.

How did you meet the rest of the band? Did it take long for the band to actually perform on stage?

We all sort of knew each other any way from rehearsing in the same building and after some people left Mike and Ben’s band Ryan and Lloyd joined and then lew. We rehearsed for a long time before we played on stage but then after playing live for a while we realised we still weren’t good enough so we went back into the practice room for another year or so before we were confident with what we had.

You have released some stunning material to date, all singles. How has the reception been to your releases? Have you got a firm following on the road now?

We seem to be getting a better reception with each single as it goes on. On our last tour we had some really good crowds so hopefully, with our tour in October we will be selling out some shows.

I first saw you supporting Blossoms in Leicester, you reminded me of a mixture of Primal Scream, Santana and Tame Impala. Solid grooves, echoey vocals and superb tunes. How has the band’s sound developed to be the one we hear on record now?

We take our time and really explore the music that we make. If you rush it you might miss out on things that can make the music better. Alan Wills our first manager taught us all these things on making music not long after we first started out, so from then we’ve always stuck to it.

You’re about to release your debut album, what will fans expect to hear on the long player?

How long did the album take to record? Where did you record the album?

We recorded the album over the course of a few months in Parr Street Studios. We had all the songs written ready to go however Joe Fearon and Tom Longworth (our producers) always like to add some sugar on top. Some parts changed as they always do when we get into the studio but we always have a pretty strong idea how we want it before we go in.

Will you be going out on tour to promote the album? Are you due to play any festivals this year?

We will be touring the album in October throughout the UK, apart from playing With the kooks earlier in the year and LIMF in July we have kept it pretty low key but we can assure that we will be coming back with a bang in terms of our live show.