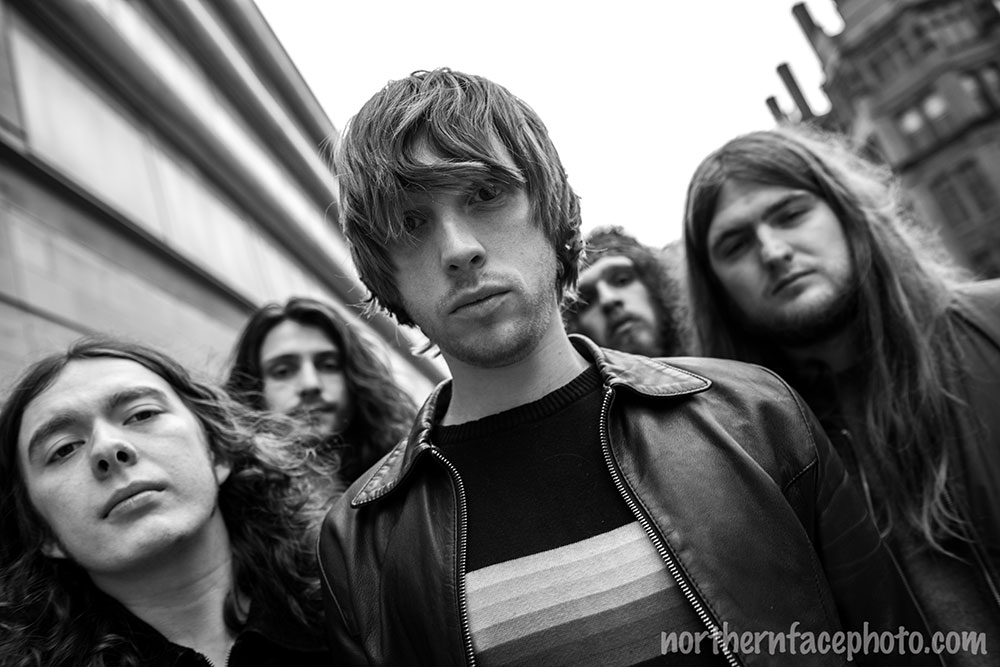 The Vryll Society is a young progressive rock band from Liverpool. Their sound has been likened to German bands Neu and Can and the Demis Roussos/Vangelis band Aphrodites Child. They play the Albert Hall Manchester, Nigel Carr was there to Interview lead man Mike Ellis and also reviews the gig below with photos by David Gleave.

“Any band where the singer doesn’t write the lyrics, I think there is a bit of a problem”

The name The Vryll Society derives from an 1871 book by Edward Bulwer-Lytton, an account of a subterranean master race and an energy force called Vril. The Vril Society was a group of ‘Pseudoscientists’ who searched for the Vril according to William Ley, a German rocket engineer who wrote an article called “Pseudoscience in Naziland”.

I’m back stage at The Albert Hall Manchester and Blossoms’ Tom Ogden is sound-checking the song Misery in the main hall. The Vryll Society’s dressing room is on the top floor, up five flights of steps and outside the door is an intriguing ladder leading up to a void in the roof, maybe its a secret hideaway or some nether world where refugees, vampires or creatures from another world can find solitute. The ladder starts half way up the wall and there is no discernible way of reaching it. Mike Ellis, (Vocals), is hanging with the rest of the band who comprise: Ryan Ellis – Lead Guitar, Lewis McGuinness – Lead Guitar, Lloyd Shearer – Bass, Ben Robinson – Drums. 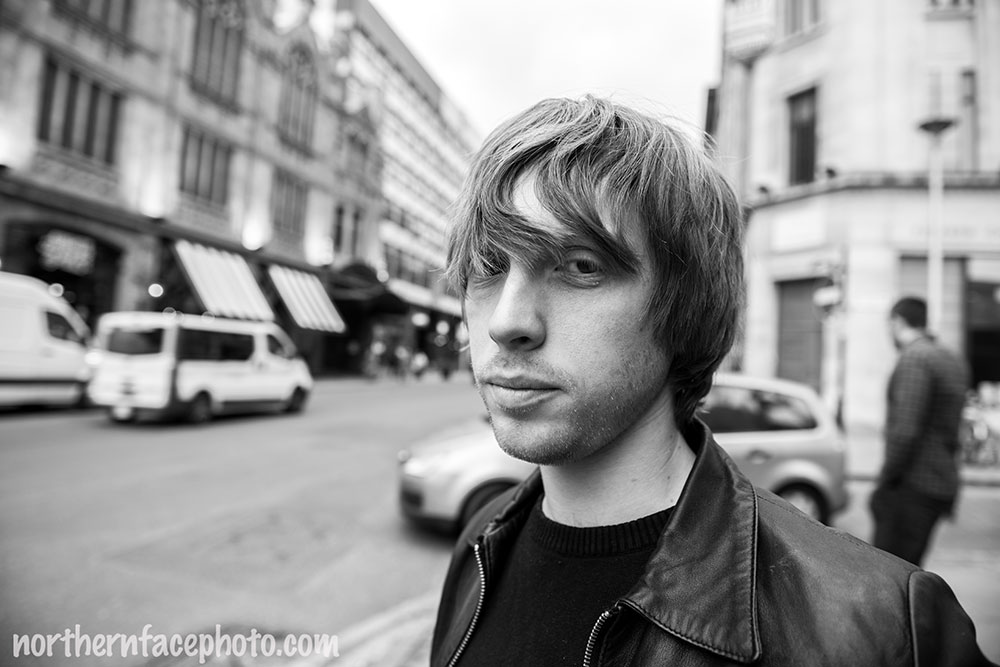 I head down to the draughty staircase with Mike Ellis for a chat and settle on the sold stone steps leading down to the rear exit;  I ask him about how the band got together “I set it up – we kind of knew that Ryan and Lloyd were really good and they were really good players. No one plays chords in our band, the more difficult, the better.

The band share the songwriting which comes out of a collaboration between them in rehearsals and bits brought in by each member but when it comes to the words it’s Mike’s gig: “We kind of share, we don’t have a main process that we go to every time. I’ll come in with something like, we don’t have the luxury to jam in the studio but we practice every day and that’s what makes it sound like The Vryll Society. If it was all me then it would be ‘Mike’s band’, if it was all Ryan it would be ‘Ryan’s band’. In our band you’ll get the difference from every one but I do the lyric writing’.

Mike started writing lyrics and poetry at just 15 years of age: ‘Any band where the singer doesn’t write the lyrics I think there is a bit of a problem’. ‘I wrote the lyrics for my first song and gradually by trial and error the more you do you get to know what works and what doesn’t work. I kind of found I write for myself and I write lyrics that I want to hear so people would go ‘yeh he’s got something to say’. I’m inspired by the Russian film director Andrei Tarkovsky, I’m really in to him and I really like Dostoevsky, beat guys from the 50’s like Jack Kerouac and William Burroughs.

Mike also has a fascination with the early German cinematography of Hans Richter and Fritz Lang as is evidenced by their song Metropolis: ‘They kind of did some really far out things in the 1920’s and everyone goes on about how things were in the 60’s but these surrealist were doing it in the 20’s. Abstract and futurism was far more out there than anything done in the 60’s when it was mainstream but in the 20’s it more arty.

It would be really easy for a band to reference the Beatles or the Stones but The Vryll’s influences are much more obscure and heavy: ‘Our producer Joe Fearon says, ‘have a listen to this, you’ll really like this’ – he used to be in a band called Top in the 80’s, he was the bass player and he’ll just bring in obscure records. We want to be more expansive and take it further – we take it as an honour being likened to people like Neu and can. I worked out that the 666 album by Aphrodites Child came out before Dark Side of The Moon so they were doing Dark Side before Floyd!’ 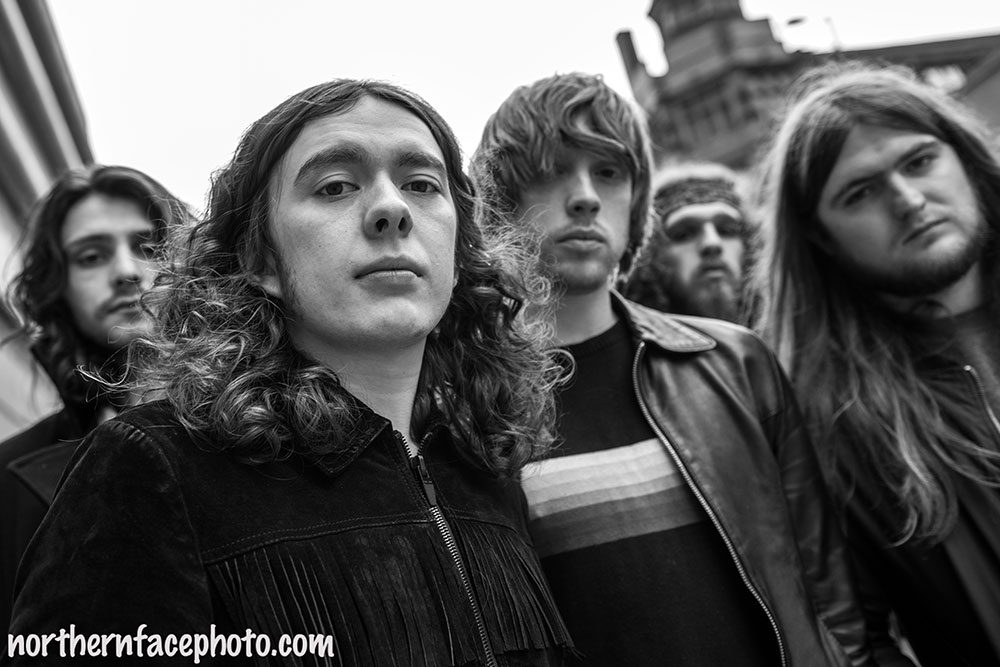 The Vryll Society have been supporting Blossoms on their current tour but there is of course a marked difference between the two band’s sounds: ‘It’s been unreal man, it’s been an experience, Blossoms sound has always been poppy and commercial, I don’t think they have made any bones about what they want to do they have always wanted to make pop music, it’s great’

The band are on Deltasonic whose owner Alan Wills passed away nearly two years ago: ‘Alan was working with us in another project called the The Dirty Rivers which had run its course and our sound was changing a lot to what it is now. We kind of couldn’t go under that flag any more so we kind of changed direction and Alan was all for it and he backed us to the hilt. It’s a bit upsetting really that he can’t see us progressing now – he died in a cycling accident which was tragic’.

The band has a pretty stable line-up now with a particular look: ‘To be honest if we changed the members in this band then it wouldn’t be the same I don’t think and Ben does looks like a mad acid scientist!’

Mike is clearly a much deeper thinker than the average front man: ‘I’m always looking up art, film, literature when I’m not actually making music I’m trying to source things to make music. Aside from music my life isn’t that exciting I like watching Everton but because of the band I kind of lose track of them!

The band had become friends with Viola Beach who were also supposed to have been on this tour with them: ‘We just got pally with them you know?, if they would have still been on this tour now we’d have been out with them. The last thing I remember was me and Chris dancing to Blossoms tunes and singing every line to the songs so that’s the last memory, so that’s important’.

The Vryll Society arrive on stage after the half hour recording of Viola Beach – it was an emotional set, a proper light show and a mostly full audience who had arrived early to see it – but no band. There was a huge outpouring of screams and applause after this riveting half hour show.

The first thing you notice about this band is the fact that all of its members apart from Mike look like they have dropped straight out of Haight-Ashbury circa 1968 – the clothes and the hair, especially drummer Ben’s are pure late sixties psych-rock. Mike is dressed in a rainbow top and tobacco coloured chinos, a thoroughly modern look, the contrast is startling, it’s like the supporting cast have whizzed forward through time to join him tonight. 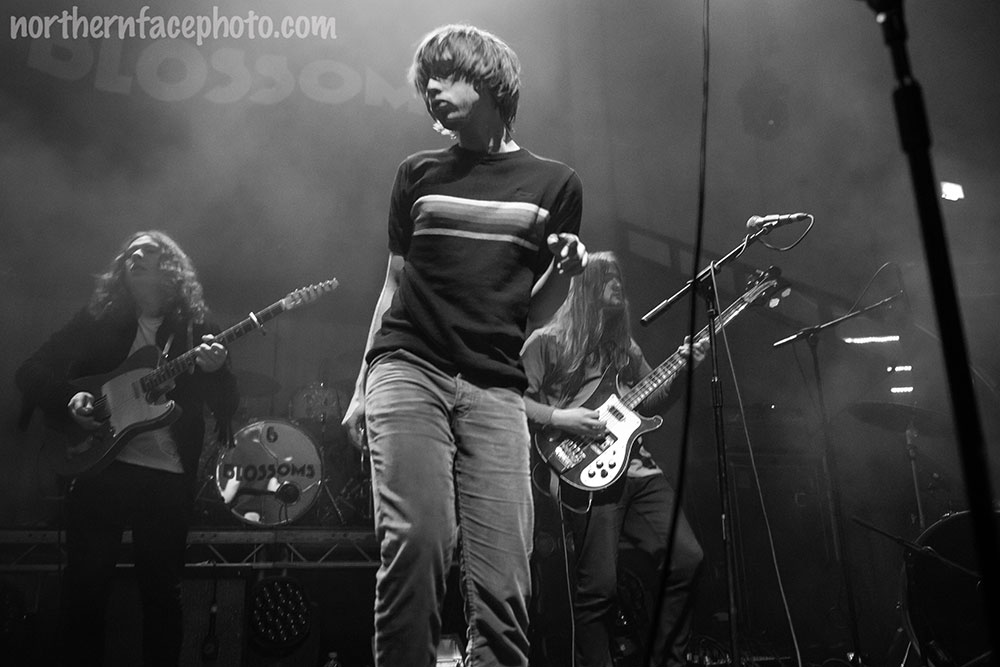 The singer stands stage centre, dancing behind the high up microphone like a young Tim Burgess, Ben, the drummer sits stage right, all frizzy long hair and bandana!

They open with the metronomic drum beat of Beautiful Faces with a melody which sounds like a mash up of Reward by the Teardrop Explodes and Born to Boogie by T Rex with a tough, progressive back beat. Mike’s right though, there is little in the way of rhythm guitar here, it’s great to hear the two leads playing off each other during this track which extends into a pulsing bass driven, acid soaked freak out with a crescendo of wailing guitars.

The sound throughout this performance is smooth. bass heavy, progressive rock with just small recognisable hints of bands like The Stone Roses and The Verve. It might only be a subtle reference; a floating vocal here or an Ashcroft intonation there but it’s the backdrop of the progressive movement of the late sixties and early 70’s that define this band, the combination forming a very modern and compelling mesh.

Air for example has an Atom Heart Mother, (Floyd album 1970), beat pulsating away in the background, I’m not sure that even the band would recognise this and maybe it was suggested in the studio, but again it soars away into something so quintessentially current and different; dense, fresh and invigorating with Mike’s beautiful vocal layered over the top.

The set lacks some melody, it has to be said – this is not pop music, light and frothy for the benefit of the young kids, it’s tight and formed, intelligent almost ‘head’ music and its appeal runs much deeper.

They end with Self Realisation with its up tempo soaring twin guitar riffs, before closing with the two speed Deep Blue Sky which starts slow and thoughtful before revving up for the big close.

The Vryll Society are a relatively young up and coming band who in my opinion haven’t reached their creative peak. I think it’s only a matter of time before they start to really break through though, and it might only be the odd new track that does it. I mean where would Hawkwind have been without Silver Machine?

Mike: ‘We’re playing Festevol in Liverpool in May, then London Calling in Amsterdam which is next week I think. But there will be a lot of festivals added’