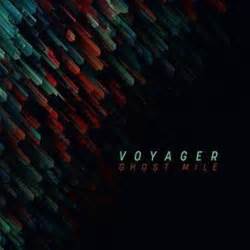 Modern progressive heaviness  combined with catchy pop sensibilities is the promise for Ghost Mile from Voyager, an Aussie outfit who smashed  their pledge funding campaign for their record in just over a week.

Amazingly it’s their sixth album appearing on the market without a real hint of their presence over here in the UK unless you’re already in the know. Their V album from 2014 proved  a breakthrough of sorts  – literally so in taking PROG magazine’s Breakthrough Artist award in 2014 whilst a  bout of recent touring in their home country with the likes of Deftones and Karnivool gives an indication of their standing.

Within a few moments of Ascension  there’s an indication of how the production emphasises the sheer size and scale of the Voyager sound – a clean and clear and cobweb clearing quality.  Think INXS crossing paths with Pearl Jam and a touch of glossy eighties polish and while Deftones’ Chino Moreno might have likened Danny Estrin’s voclas to Simon Le Bon (and you can see here and there that he has a point) don’t let that  put a damper on things.

The guitar pairing  of Scott Kay and Simone Dow provide a  fiery and feisty and smooth melodic core to the stop start rhythmic syncopation that The Who once called meaty, beaty, big and bouncy.  Metal – not quite; progressive – not really in the strictest sense of the genre yet with a drive and passion and an element of intricacy without being over elaborate.

To The Riverside sees things get briefly reined in;  a dreamy atmosphere giving way to the vibrancy of the adventurous and elaborate title track. This Gentle Earth (“I have never felt so alien”) is a concession to catchy mainstream and the electronic pulse rhythm of What A Wonderful World might drift much more deeply into an eighties path  that Kylie might have gone down had she wanted to throw her cap  into rockier waters. Disconnected balances things out with  a visit to  the other end of the spectrum. Machine gun efficiency in the delivery, a mid song departure into a keyboard/vocal exercise and  even a brief flirtation with  the harsh vocal that remains the revered territory of the dark metal brigade.

With Ghost Mile, Voyager seem to have found their niche, honing in  on a pprogresison from what worked well with V. Another band to add to the growing list of exciting cache of progressive tinged bands.

You can watch Ascension from the album here: