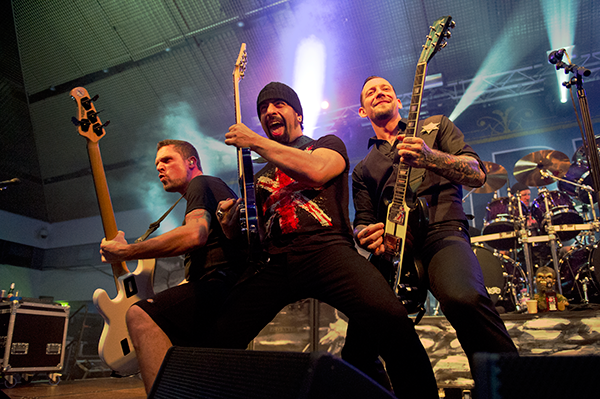 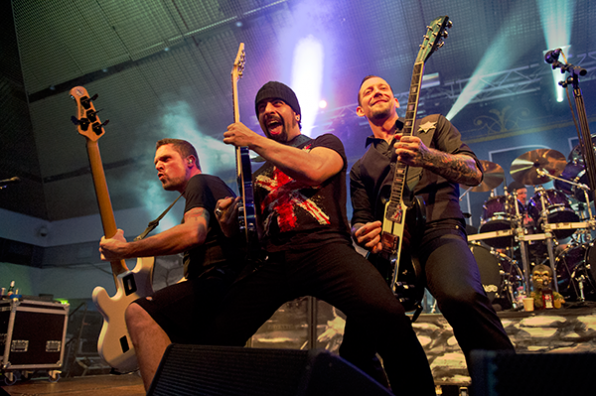 Photos above of Volbeat and all others on this page by Tess Donohoe.

Volbeat have been on an almost continuous world tour since the release of their last album, Outlaw Gentlemen and Shady Ladies, headlining shows and festivals across Europe and the US. Louder Than War’s Nick Holmes (words) and Tess Donohoe (pics) caught one of their final shows of the year last week, check out their review below.

Britain has been a bit slow to catch up with Danish band Volbeat, which has headlined massive festivals on the continent alongside the likes of KISS and toured arenas in America. The band hit the UK off the back of a co-headlining jaunt with US metallers Five Finger Death Punch and brought some brutality with them to Britain in the form of Hatebreed. 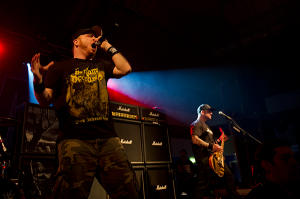 Before the show begins a dude wanders around the stage wearing a T-shirt claiming “Life Is Pain”. When Hatebreed kicked off it certainly sounded like it can be. An intro tape of the “Rocky” theme gave way to a fast and furious mix of hardcore, thrash and speed metal. Grimly-titled “In Ashes They Shall Reap”, “Everyone Bleeds Now” and “Dead Man Breathing” bombarded the audience, some of whom were clearly new to the band and not sure what to make of it. One young couple couldn’t keep their hands off each other’s bums in some sort of reassurance ritual, while a middle-aged pair giggled and took selfies.

Former “MTV Headbanger’s Ball” Jamey Jasta is an accomplished rabble rouser and had pretty much everybody getting involved with his calls to mosh and pump fists in the air, “Yeah! Everybody! Even if you’re on crutches!” He also paused to praise Volbeat for bringing eclectic tour mates with them, saying he first saw Alice In Chains open for Slayer and angry Brit-punks The Exploited with US goth legends Type O Negative. “It’s all heavy! It all rocks!” affirmed the frontman. By savage closer “Destroy Everything” the walls of the place were sweating. Life may well be pain but there’s pleasure too. 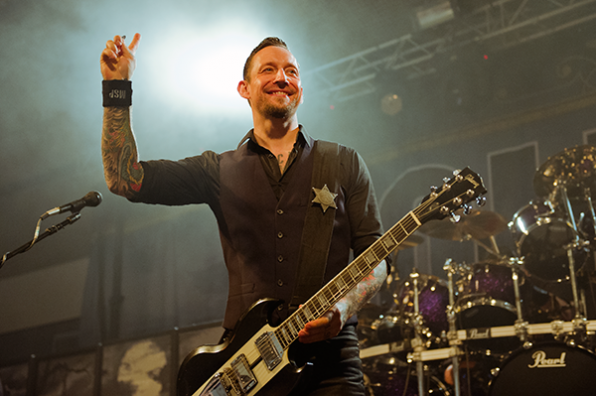 As Motorhead’s “Born To Raise Hell” blasted out a Danish flag bearing the name of the city Ringsted was draped over the barrier and the excitement of the sold out crowd was obvious. The intro stopped at the lyric “Take it or leave it!” with apt timing and the band appeared to huge cheers. Singer / guitarist Michael Poulsen yelled “Here we go!” as his band, including ex-Anthrax member Rob Caggiano, got the party started with “Hallelujah Goat”. If the Devil has the best tunes then Volbeat snaffled a generous share of them. The set, including “Guitar Gangsters & Cadillac Blood”, “The Mirror and the Ripper” and “The Hangman’s Body Count”, displayed strong influences ranging from Metallica-style thrash to rockabilly and punk. 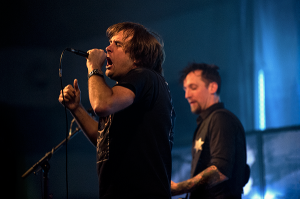 Poulsen is confident and charismatic as well as a snappy dresser. He is also cheeky without being a perv, asking to see more girls as “We’ve had to look at each other all day!” Plenty obliged by climbing on shoulders for the band’s delectation. It must be said Volbeat have some rather good-looking fans.

Another influence is Johnny Cash and the audience keenly joined in a tuneful run through “Ring of Fire” as lead in to “Sad Man’s Tongue”. A cover of Dusty Springfield’s “I Only Wanna Be With You” was also an impressive mass sing-a-long. An added surprise was Mark “Barney” Greenway of Napalm Death bounding onstage to bark his way through “Evelyn”. What a mixture!

The main set closed with rousing “Doc Holliday” but there was more before these cowboys rode out for East Anglian horizons. Quick-fire trio “Pool of Booze”, “Fallen” and “Still Counting” rounded off the show and the band thanked everybody leaving to the strains of “The Terminator” theme. They’ll be back!

Next time the venues and crowds may be bigger and the only criticism must be that this itinerary miserably failed to include any dates in the West Country. One keen bunch, including a lady on crutches after a hip operation, travelled from Wales and a mum and her lad celebrating his 18th birthday had driven up from Devon. So hopefully those guitar-slingin’ sons o’ bitches will bring their Devil’s party music to the wild West.