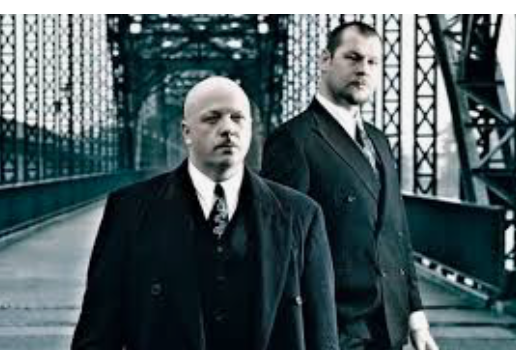 In their first UK headline tour in years, VNV nation have not only smashed all musical expectations, but displayed the ability to transport their audience back 20 years.

VNV’s recent tour was a country-wide call to arms for ageing goth scenes – venues most commonly frequented by hip 20-somethings were rammed to capacity with all ages and genders, united in dance and spilt snakebite and black.

The English leg of their tour culminated in a packed-out show in Camden’s Electric Ballroom where, despite recovering from a bad dose of the flu, VNV soldiered on and commanded the room with ease and warmth. Hot on the heels of new album Noire, their new tracks had the crowd singing and dancing as fervently as the old classics. VNV Nation know their audience and the setlist was sculpted to perfection, giving glowstick-wielding fans little time to catch their breath.

Following the new Noire opener ‘A Million’, singer Ronan addressed the crowd and the hot topic of phone usage at gigs. Like a benevolent teacher, he doesn’t forbid their usage but rather ‘if you’re going to block anybody’s view, make it your own’.

His requests were met with venue-wide whoops and cheers of agreement which held fast throughout the evening. While Ronan was not especially aggressive in his speech, and a Tool-style ban was not enforced, the tone was still set; the gig only sparingly punctuated with glowing screens for the full duration of their two-hour (plus!) set.

VNV’s pounding electro-goth sound seems to have only improved with age, like some floor-filling fine wine. Each song was as gripping as the last, creating a primal need to move in communion with one another. By the time emotional fan-favourite (and excuse to tongue your partner) ‘Illusion’ came around, it seemed as though VNV were merely a catalyst for an old-school celebration of music and cyber/goth culture.

Retaliate, When is the Future? and Control were similarly fantastic, their pounding beats infusing the venue with a pulse that was impossible to ignore.

If you weren’t aware that Chrome was VNV’s biggest floor-filler, seeing them perform it live was real baptism of fire. Platform boots and overpriced lager hammered the boards until the whole floor seemed to sway with each militaristic step.

Despite a microphone blip and Ronan chasing the tail end of a sore throat, his vocals were commanding and crisp as on any record. VNV have remained true to their brand throughout the years; sincerity doesn’t have to mean a ballad and piano, and togetherness doesn’t have to be saccharine sweet.

Ronan repeatedly addressed and celebrated the crowd with jokes and encouragement, peppering their set with speeches and endearments;  however, none was contrived, which was impressive in our age of ‘live laugh love’ over usage.

VNV transcend boundaries of genre and listenership and, while the band was jokingly appalled that parts of their setlist were approaching 20 years old, their sound will still be as relevant and exciting if they decide to continue for another 20.