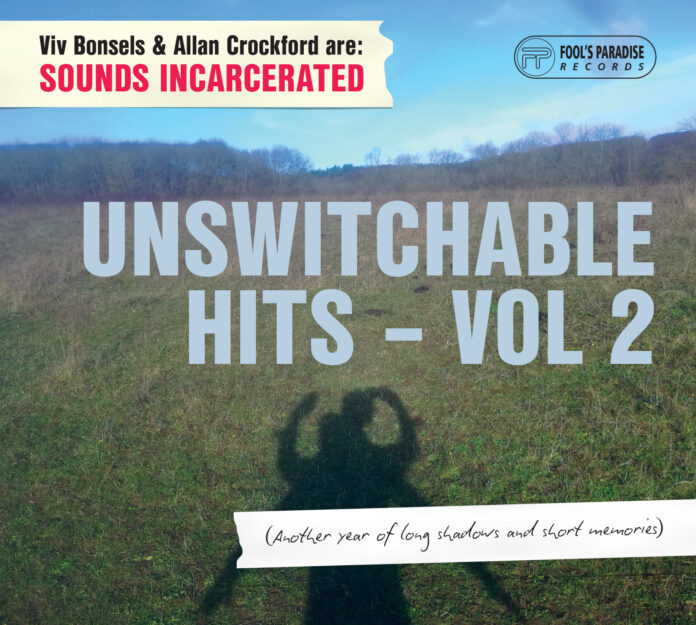 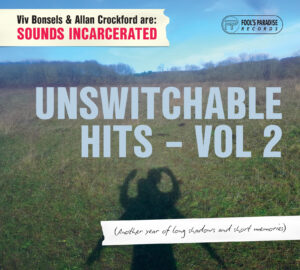 Sounds Incarcerated: two married musicians stuck at home and unable to perform with their regular band… Allan (ex of The Prisoners, Solarflares) and Viv (The Galileo 7) follow up 2020’s ‘Unswitchable Hits’ with another eclectic collection of covers originally recorded for the virtual version of a local themed open-mic night. It’s another revelation to ‘punk throwback’ Ged Babey who discovers he actually likes songs originally performed by the Bee Gees and Jethro Tull.

When I reviewed Volume 1 I called Viv and Allan ‘the George & Mildred of Garage Psych’ which may not have gone down that well as he, George, was a weed and she, Mildred, was a lush.  So, I’d like to publicly apologise any distress caused and offence taken. On to business – this compilation is even better than the first and is brought to you by ‘the Howard and Hilda of Medway Garage Psych, Pop and Baroque ‘n’ Roll’….

Like H & H, Allan & Viv are perfectly in-tune with and attuned to each other that artistically this was sure to be another triumph. They draw the line at matching knitwear (as far as I’m aware…) but they certainly bring out the best in each other musically with these fab selection of covers.   There are no ‘obvious ones’, some pretty obscures selections but not a weak track.

I only really knew three out the thirteen songs (the Primitives, Julian Cope and Pink Floyd ones) because I’m no expert on psychedelia – but Unswitchable Hits Volume 2 is an education as well as a journey into the back-waters and back catalogues of psych.

The track listing runs as follows:

1. The Real Thing (originally recorded by Russell Morris) – pop psych from Australia 1969.  I think this is what they call ‘pastoral’ psych. It’s lush, slowly builds, a great opener.

2. Coz I Love You (originally recorded by Slade) Kinksy 1971 number from Slade. Possibly the only song on the album which is not 100% convincing. Great guitar solo saves it.

3. Porpoise Song (originally recorded by The Monkees) beautiful Goffin/King song recorded by the Monkees in ’68 with Mickey Dolenz on lead vocal.  This is just utter perfection to me. I hadn’t heard the original though so Monkees fans may not agree.

4. Windfall (originally recorded by Offspring) 1972 Prog single not the American punks. I am growing to like this kind of pop-psych with prog-rock touches – goes against all my ingrained punk training…

5. Stop Killing Me (originally recorded by The Primitives) Their second single from 1987 on Lazy Records. Remember when the original came out and the Primitives were the coolest band on the planet for a summer (until they ‘signed to a major’). Faithful, fantastic cover version.

6. Living In The Past (originally recorded by Jethro Tull) 1969 single. Time signature of 5/4.   This probably sounds more like the Swingle Singers than the Tull original. Can imagine the Stranglers covering this in secret.

7. Sunshine In My Rainy Day Mind (originally recorded by Polly Niles) See LTW review. This is what they call ‘Sunshine Pop’ I believe.  Very Middle of The Road but still has a seemingly effortless cool about it and makes you think of ‘dolly-birds’ in mini-skirts.

8. Barterers And Their Wives (originally recorded by The Left Banke) Baroque pop from ’67.  The only thing I can compare this to -from within my own music collection – is Manfred Manns Up The Junction soundtrack songs. This is a bit more folk-proggy I guess.

10. Every Christian Lion-hearted Man Will Show You (originally recorded by The Bee Gees) a 1967 B-side for the band then referred to as ‘The Australian Beatles’. Later also covered by Flaming Lips.  A very odd song with faux-Gregorian chanting but it gets its hooks in you.

11. All Life’s Tragedies (originally recorded by The Tourists) Album track from the bands second album from 1979.   Superb, classy song wasted as an album track.

12. Sister Surround (originally recorded by The Soundtrack Of Our Lives) The most recent song, from the 2001 album Behind The Music by the Swedish band.  Doesn’t grab me for some reason…the only song that I’d skip.

13. Matilda Mother (originally recorded by Pink Floyd) From 1967’s Piper At The Gates of Dawn as I’m sure you all know.  Bores and Floyd obsessives would probably say its untouchable, but I think this is a perfectly respectable cover of the Syd Barrett song.

Sounds Incarcerated are just a brilliant project. Volume 2 is a great ‘homemade’ album.  From the Terry & June of …(Ah Fer Fux Sake!)… From Viv & Al.  Bands who sweat blood, long and hard and pay extortionate fees for studio-time in flash studios…. must seethe with envy when they hear the quality of these home-produced gems.  From the Medway With Love.