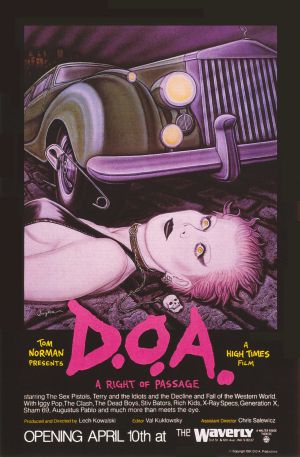 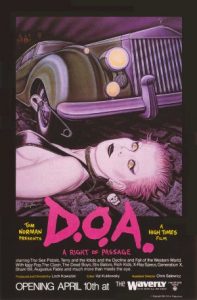 ‘We are delighted to host a post-screening Q&A featuring Viv Albertine (The Slits) and the film’s screenwriter/assistant director Chris Salewicz (Joe Strummer Biographer) in conversation with boss of Louder Than War website and frontman of the Membranes, John Robb.’

Tickets and more information from here

D.O.A: A Right of Passage released in 1980 by Lech Kowalski is a cult classic, which hasn’t screened in the UK since the early 90´s.

It looks at the origin of punk rock, with interviews (including the famous interview of Sid Vicious and Nancy Spungen in bed) and concert footage from the Sex Pistols, The Dead Boys, Generation X (with Billy Idol), The Rich Kids, the X-Ray Spex, and Sham 69, with additional music from The Clash, Iggy Pop, and Augustus Pablo.

Focussing on the Sex Pistols’ 1978 tour of the United States, Kowalski followed them with handheld cameras through clubs and bars. They are seen performing much of their classic early repertoire in clubs and concert halls throughout the South, as well as at their final show in San Francisco. Combined with footage of contemporary bands, trends in the fashion capitals, and punks of all shapes and colours, Kowalski created a grainy, stained snapshot of a movement at its peak.