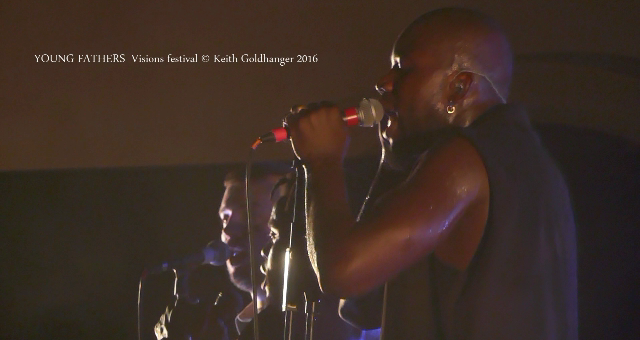 Visions festival, now in it’s fourth year returned to East London and we sent Keith Goldhanger along to visit all five venues and report back with what he saw and heard.

This is a festival that we wish went on for more than one day.

A two-day festival hosting identical line-ups on both occasions so we can get to see (almost) everyone on the bill or even return to see the same bands with some friends who may have missed out the first time would be very satisfying.

There isn’t much to criticise about Visions festival. We’ll always moan about the cost of a pint, or in some instances today, a small can (£5.00).

If we’d read the small print we could have got up early and watched a dog show or visited the Moth Club for a bit of Black Metal Yoga before the live music began. A second day’s festivities may have had some tempted to give this a go if we had a second chance but Visions is just the one day and it’s really the only major gripe we have.

One wristband strapped next to the watch on our arm confirming its two o’clock and over thirty decent bands ahead of us that we may or may not have any prior knowledge about means we’re on the starting blocks for another day of musical entertainment.

The five venues spread across Hackney appear on first look of the map to be a bit of a schlep on paper however it’s no more spread out than Glastonbury. There is no mud, and most important of all, we can get around fast enough thanks to London’s very frequent bus service and even pop into the nearest post office for a stamp to put onto that birthday card you forgot to send . . . or I would imagine a less expensive can of beer if you were thirsty.

We begin in Moth Club and wait patiently for GABRIEL BRUCE to entertain a good size crowd with crashing riffs and a set of tunes that are as seriously presented as the tunes Pulp once gave us. A voice as deep as Nick Cave’s and a sense of humour that creeps up on you just as you begin wondering what the dickens he’s singing about keeps us interested throughout the short set.

months ago) is a cool (cold) dark underground room hosting a few chaps in overcoats and hats and one sporting a nice white woolly jumper. One chap, the one in the jumper, sits down for most of this before getting up to read something from a book, and another man just crouches down towards all three microphones that he drifts between occasionally blowing a trumpet and mumbling some incoherent words into. They sound like a DIY band from the early 80s and have probably recorded all their stuff on a rickety old cassette for an authentic sound that we’ll be hunting out in the morning. None of their songs seem to have proper endings and are slow to take off but there’s something going on up on this stage that the people involved are in control of and at one point are inviting volunteers to join them up on stage to play tambourine. However no one seems to be prepared to take this up.

because we want to see something in every venue today. This turns out to be a very good decision as her dreamy Bjork-like electronic tunes are just the tonic for a long day in the sun that will get interrupted by diversions into warm buildings for some musical interlude as the hours pass by.

WESLEY GONZALEZ, he of former favourites of the world Let’s Wrestle is magnificent. Considering how distinctive sounding his former band were this is definitely not a case of the man in the blue ‘winter shirt’ recreating anything he’s done previously. The guitars have gone for a start, replaced by three synths (one driven by Rose Elinor Dougall) the

occasional saxophone and a performance that if he disrobed his shirt could be akin to a Har Mar Superstar show. Walking along the front row at the end shaking the hands of as many onlookers as possible was a very nice touch and shows what a star this man is.

FAKE LAUGH play twangy guitar-driven indie that could do with a few layers of feedback in order to ‘nasty it up a bit’ we overhear, and the voice near us is right. They seem to have a few very well crafted pop songs in their set in the same way that recent newcomers The Magic Gang have been serving up this year and it’s also very infectious as we find ourselves humming a tune of theirs a few moments after leaving the venue.

A short bus ride over to the hot sticky Oval Space that’s currently as stifling as standing in a greenhouse is where we witness Canadian JESSY LANZA, together with a percussionist performing some delightful pop tunes that could be Grimes or Madonna remixes played live to an audience we feel would rather be dancing their socks off during a darker and cooler time of the day. The same can be said of MYKKI BLANCO whose intense rapping, (mostly in the audience) and manic, celebratory performance yet again shows us what Visions can provide when one is least expecting it. MYKKI BLANCO’s music is fierce, noisy, humorous and possibly a little intimidating at the same time. It’s what we wanted and sometimes received from our favourite punk rock bands when we were younger and although he is creating a bit of disco dancing mayhem in the room it’s a very entertaining way to be spending a hot Saturday afternoon despite the arid conditions.  A fabulous performance.

ESG may have all the good tunes they’ve accumulated over the years that every man and his laptop may have taken samples from but today’s performance lacked anything exciting or even nostalgic. A few cowbells, drum rhythms and repeated vocal lines made this a struggle to stand through. Our dancing shoes were made redundant for an hour and this was a disappointment. It’s not often one craves a DJ set but this may have been more of a hip shaking experience than what we witnessed as the sun went down outside.

Which leaves us with YOUNG FATHERS to round off the day.

Is there any better band than this in 2016 at the moment? We can’t even work out how they achieve such a glorious sound to be honest. Intense, pounding, 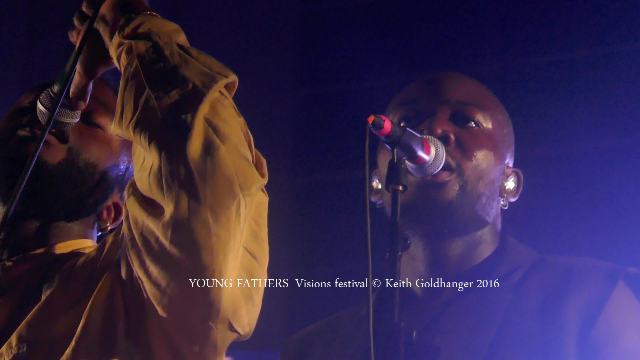 tribal drums, droning synth lines and a few samples that are complemented by soulful voices that come from every direction up there on this big stage inside The Church of St John-at-Hackney.

Each figure apart from the drummer is wandering around the stage, occasionally stopping to stare into space and occasionally invading each other’s space. They all seem to just be doing their own thing, avoiding eye contact with each other and sometimes sharing the same microphone as they go through tune after tune without introduction or glancing towards a delirious audience who make the biggest noise of the day in between songs. Young Fathers performance, indeed existence, is made up of a number of carefully conceived ideas that are blended together and result in what is viewed by many as the coolest thing one can dance to in this day and age.

The discipline in each individual stands out, fit healthy looking chaps, voices that seem to be even stronger than when we first met them and tunes from a couple of albums that one day will be looked back on as classic UK anthems that at the present time are as original as anyone else could even contemplate bettering.

Lauren Holt (‘Law’ – well worth checking out her tunes https://www.lawholt.com/ ) joins in on the fun for a couple of numbers. She’s as cool as the four she stands alongside. A stand up drummer and four figures all dancing individually and doing their equal fair share of work keep this engine running without feeling the need to ask the paying public if they’re happy, 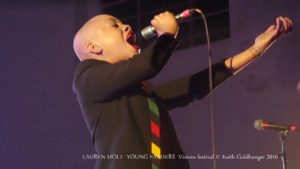 encourage them to put their hands in the air or any of that other nonsense we see far too much of nowadays. This is a stunning performance we’re watching (as it is every time we’re honoured to be in earshot) and hearing, and it’s yet another faultless performance under their belts, maintaining the high standard they set for themselves a few years ago and have since managed not only to maintain but possibly even better as the years go by.

Visions festival, now four years old, seems to be very well connected with what the paying public want for their money. Most of what’s going on during the day is unknown to one or two of us but firmly embraced once we get to see and hear what’s being put in front of us.  Lightning Bolt, Cate Le Bon, Ultika Spacek, Pumarosa, and obviously two or three dozen others we’d like to experience one day and tell you about were also spread around Hackney. Yak, Anna Calvi, and Let’s Eat Grandma some of us have already seen this summer and can recommend. Bad Breeding were ace when we saw them a couple of years ago and we leave with the niggling feeling that although this was yet again a superb day out, we do wonder what else we have still not discovered that everyone else has?

For the time being we’ll keep hold of the schedule for further investigation, stop moaning about being unable to be in more than one place at the same time and maybe consider leaving the idea of attending a Black Metal Yoga session to the imagination for at least another year.