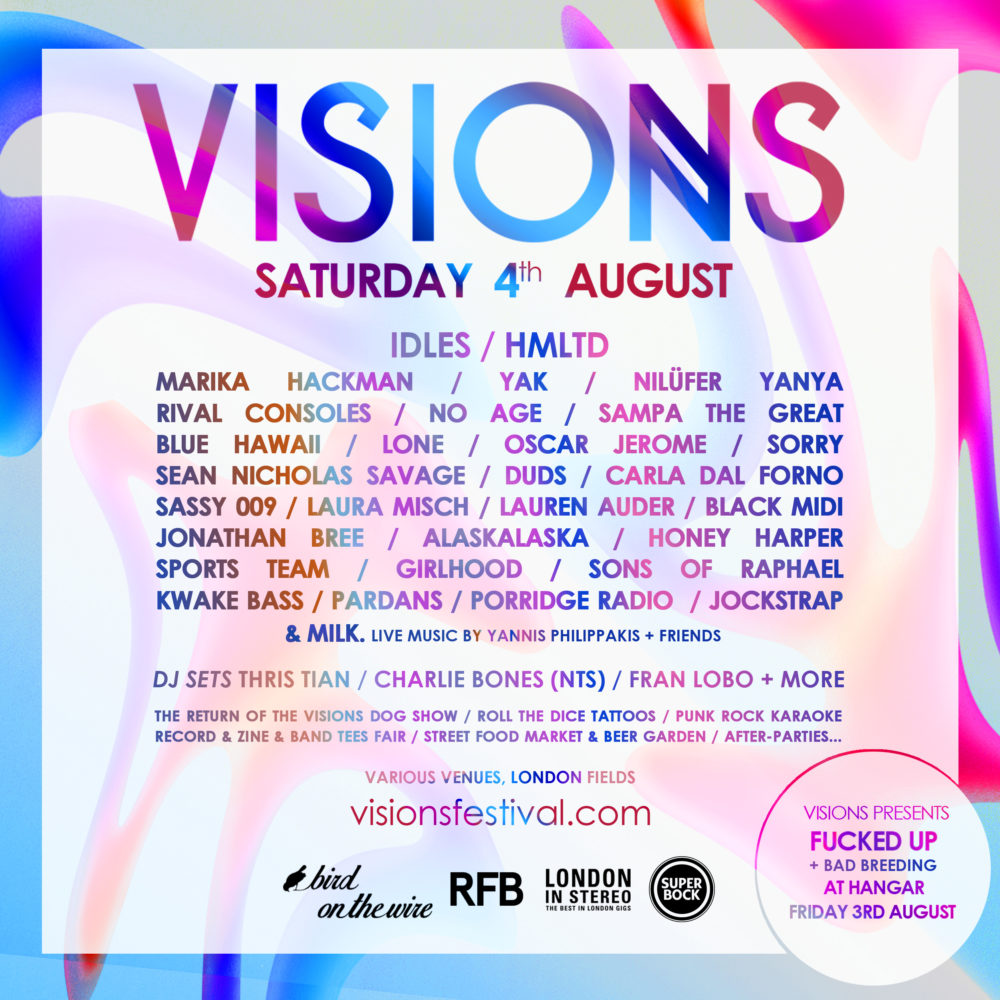 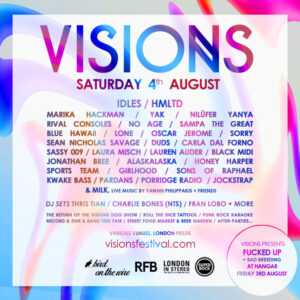 Visions festival in East London is becoming such a marvellous annual event that we think it’s time to shout a bit louder about it. Keith Goldhanger tries to tempt us all to experience a day when you can walk into a room blindly and come out asking what the f*** it was you saw and heard (in a good way).

The past few years have found one or two of us bookmarking Visions as a day when some of the music we now listen to on a regular basis was first introduced to us. On top of all that there’s always a few acts some of us have met before that we’re happy to try to catch up with as the day flies by.

Go to see something you’ve seen before or take a risk ?
Or both…
This is what defines Visions and usually you can’t go wrong.

Like during Visions Festival in 2015, the year we had the choice of Fat White Family, Holy Fuck or  an unknown (to one or two of us) band from the USA called Ho99o9. A band that sounded extreme and raucous enough to make us want to witness them playing in the recently opened, most beautiful venue in London called The MOTH Club. The same day we cursed ourselves for trying to watch Girl Band in a rammed, cold, dark room. The same day some of us saw and found out who Blanck Mass was. Gazelle Twin too.

In 2016 The Young Fathers provided a stunning performance inside the Church of St John-at-Hackney. We discovered the disco electronic sounds of Jessy Lanzer and two years later we’re still wondering if we’ll get the chance to see her in a field one night. Wesley Gonzalez played a blinder in the Moth club that was (and still is) as lovely as it was a year earlier  and we cursed at missing Anna Calvi, Lightning Bolt, Pumarosa and countless others we have gone out of our way to see and hear since.

Then 2017 – Marie Davidson at the London Brewhouse played a fabulous mid-afternoon set and then came back and sold out the Moth Club. Liars, Blanck Mass in a bigger and louder venue than previously… Shame, Goat Girl, Her’s…Phew!

You’ve still got time to dip your toes in this year’s event on Saturday August 4th so come and see IDLES, HMLTD, YAK, SPORTS TEAM, MARIKA HACKMAN, NO AGE… and take a little time out before hand to pick out something that you may not be familiar with yet. Visions is the place to come and achieve such things. There’ll be gigs happening in over half a dozen venues, food stalls, the annual dog show, after parties, hot weather (hopefully) and of course some decent ale.

If that sounds tempting then the evening before (Friday 3 August) allows those of us keen for a bit of noise to witness what could be one of the most tempting line-ups we’ve seen all year:

FUCKED UP, BAD BREEDING & SAUNA YOUTH at the venue known to locals as Hanger in London Fields. You can get a separate ticket or there’s a special double package,

Get all the information you need here :
www.visionsfestival.com

Tweets by VisionsFestival
Get a taste of what’s on offer here: