Visions is a one day celebration of music, art, food and culture held in East London. Keith Goldhanger hopped on a bus and concentrated mainly on the music.

There are a quite a few good reasons now why Visions Festival (this is its fifth year) may now become an integral part of one’s musical diary.
We may have missed the first two for reasons unknown however by the time we did get around to experiencing Visions in 2015
https://louderthanwar.com/visions-festival-east-london-saturday-8th-august-2015/ we realised that there are people out there happy to arrange for an array of weird and wonderful acts to congregate in East London on an annual basis and give us something a little bit more challenging than another four piece rock band sounding a little like Kasabian.
Visions festival provides bands that some of us would never have been aware of previously and a few we already are aware of that have yet again managed to get us over to East London’s Mare Street for another two o’clock kick off.

Previous years at this event have introduced us to some marvellous acts some of us are still listening to today (H09909, Gazelle Twin, Jessy Lanzer) therefore why should we expect Visions 2017 to be any different? The worse that can happen is we’ll get to see Blanck Mass and Liars again.

We’ll have another look at GOAT GIRL we said as we crawled out of bed, made sure we had our previously arranged schedule in our pockets and prepared for rigorous bag checks and a thorough pat down every time we entered one of the five venues available to us at the shake of a wristband.

Animal lovers may have arrived even earlier than us for the dog show a mile or so up the road but Goat Girl managed to achieve the status of first band of the day. This produced a good size crowd inside the dark underground basement known to us locals as MANGLE. Fans of Courtney Barnett and the Throwing Muses come to mind as they plough through their short tunes, occasionally glancing up at the crowd before them, breaking into a self-congratulatory smile and causing the heads in this room to nod as the four piece succeed in maintaining the attention of those of us fortunate enough to have witnessed this introduction to the day.

Then the decision has to be made whether to turn left or right as we leave this venue to see what else is on offer but decide on a brisk walk around the block.
The truth ? Timing how long it would take to get from Oval Space back to Mangle for later on – keep it to yourselves, please.

We re-enter Mangle (glasses case and camera case checked more thoroughly) to see what WOLF EYES have to offer. This trio have been going for years but to these ears have little to offer. Each tune building up slowly to bring us to a climax we never get. Later on in the day we’ll experience noise at it’s finest. Noise with some beautiful underlying feature that we find hidden underneath all the layers of frequencies we may not have heard thrown on top of each other before. Wolf Eyes seem to be making this up as they go along. A saxophonist, a guitar, some keyboard loops and some vocals echo around us and go nowhere.
However we can. 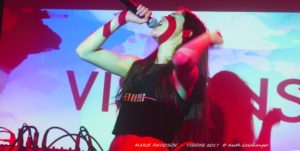 from one room adjacent to the venue and a very nervous looking lady who goes by the name of MARIE DAVIDSON (pic right) making sure that no one gets in the way and nothing falls off onto the ground below.

What we see and hear for the next hour are some of the most delightful beats and tunes we are likely to hear all day. This (French) Canadian keeps herself busy tweaking this that and whatever else she has on the table in front of us and within minutes has turned the room into a head nodding, arm waving appreciative audience that all feel they have hit on something glorious at only half past four in the afternoon. Marie is providing those of us in front of her with dance music similar to that our own Factory Floor have provided in the past. She sings in French and English and someone mentions Donna Summer or a loud and fast Serge Gainsbourg soundtrack. Fast rumbling bass drums, electronic noise at it’s finest and a finale of ‘Adieux Au Dancefloor’ elevates itself from a half decent tune (we heard during the build up to the day) to one of the years finest sexy dance floor anthems that simply needs to be heard and danced to. Which is what a few people in the room achieved at least an hour or two before tea time on a Saturday evening.
Performance of the day without doubt.
She’s currently keeping herself busy playing a huge worldwide tour that includes another London show before the end of the year. Highly recommended, fabulous stuff, Visions Festival eh ?
That’s why we’re here.

HOLLY MACVE is playing in a café that is so packed we find ourselves listening intently whilst simultaneously looking out of the window at London’s summer skyline. Her voice is a pleasure to hear live and accompanied by either an acoustic guitar or piano this is all that can be heard whilst the rest of the room is virtually silent.

KERO KERO BONITO (pic right) are terrible. Ignore what’s been written previously when we saw them in a field entertaining families and children. If you’re reading this far down the page then you might not like them either. KKB (as the cool kids refer to them as) are performing today inside a hot sweaty sunlit room (Oval Space) and in front of grown up adults in their twenties or thirties. There’s no excuse for this today. Once was entertaining, twice in a week is simply daft. This is music for eleven year olds (as we witnessed a few days earlier at Standon Calling) but it’s also something you should see and hear at least the once though. Especially if you’ve got young Children. The videos are great and they could end up either sound tracking their own cartoon series one day or possibly doing the rounds at Center Parcs. There’s no way the likes of us are actually meant to sit in our living rooms and listen to this music but we applaud the actual balls to travel along this path, do it irritatingly well and provide the world with this child like behaviour that we feel could gather together the audience they will possibly get in time to come. If you hear this trio once then the next time you hear their tunes will probably be when you’re whistling them yourselves whilst washing the car. The chap at the back today with a t-shirt made up of images from chocolate wrappers get’s a big (double) thumbs up too.
So not too terrible
Just a bit twee.
A bit Irritating.
The opposite of Atari Teenage Riot.

Time for something brutal and fierce is in order as we re-enter Mangle (maintaining the same level of cheerfulness as we undergo another vigorous bag search and body frisk) for the half of Fuck Buttons we know as BLANCK MASS (pic right) and experience the tracks from his latest gloriously noisy album Dumb Flesh at ear splitting volume. Benjamin John Power stands amongst a table of electronics, occasionally screaming through a microphone we’re not sure we can hear and glides us through the pure pleasure of recognisable tune after recognisable tune that have our heads on the verge of exploding. It’s loud but not quite distorted. What we’re hearing are three or four different parts of Blanck Mass tunes one can occasionally pick out amongst the racket. This is what makes this music so fascinating and unique.
The audience seems to be moving along to each of these rhythms highly disguised amongst the noise, everyone reacting to any of the different parts they can pick out, arms are raised as each of the different rhythms are tightly interwoven into these pieces.
The venue we’re in seems to be running out of beer though and there’s a brew house around the corner containing a chap called HELADO NEGRO who is gently singing his way into everyone’s hearts. Behind him are two Silver tinselled objects, slowly gliding around the stage. It’s an odd experience. The tinselled people get us intrigued enough to have a closer look however whilst the music is a pleasant enough sound track to sup our beer to it’s not going to keep us away from the opening few bars of LIARS back around the corner.

Angus Andrew, now the remaining original member and possibly the tallest man in the room enters the stage with a short jacket covering what is eventually revealed as a full white wedding dress with veil. A slow start soon get’s underway with songs from the forthcoming album TFCF (Theme From Crying Fountain) sounding as rhythmic and messed up as anything we’ve been used to from this band since their introduction over a decade ago. Cred Woes, the first track from the new album that some of us have heard is already a favourite amongst those here this evening. We get Mess on a Mission and the audience, already as raucous as you’d expect after nine hours of partying are in full voice as the refrain ‘Facts are fact and fiction’s fiction’ fills the air. This is messed up electronic punk rock dance music we’re standing in front of here. The rhythm changes and occasional crashes remind us of our old hero’s The Butthole Surfers. Liars tunes shake and shudder and occasionally come to a sudden halt. By the end, the audience is being asked to calm down by concerned security and as the weary few depart after an hour long set, the remainder of the crowd hang around discussing further late night activities that are still going on that their wristbands can get them into.

We’ll always come away regretful of what we may have missed however Visions has succeeded yet again in providing some weird and wonderful artists that some of us may not have ventured out exclusively to see.
The day has also added more acts to the long list of performers that we already feel the need to stand in front of again or seek out at home. It’s been another educational experience giving one or two of us a couple of more favourites we’ll definitely be seeking out ready for a next time.

Visions delivered the goods again this year and we didn’t hear one guitar solo all day.
Perfect.

All words and photos by Keith Goldhanger. More writing by Keith on Louder Than War can be found at his author’s archive. You can also find Keith on Facebook and Twitter (@HIDEOUSWHEELINV).You may subscribe to the Goldhanger Shorts Facebook page too if you so wish.