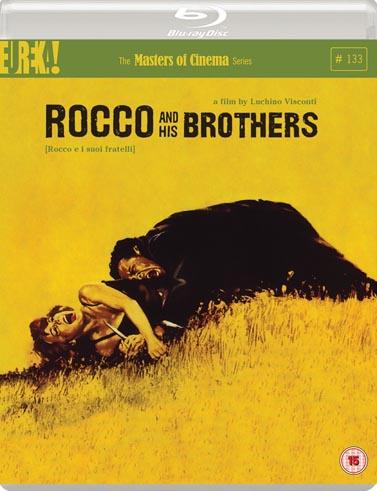 Louder Than War’s Jamie Havlin reviews another favourite film of Morrissey, this time from the colossus of Italian filmmaking, Luchino Visconti.
A key and acknowledged influence on films such as The Godfather and Raging Bull, Rocco and his Brothers also bears comparison with British kitchen sink dramas such as Saturday Night and Sunday Morning. In fact, it’s easy to imagine a British version of the film from that era, albeit I doubt it would have such a grand sweep and be quite as operatic.

Not surprisingly, it’s also a favourite film of Morrissey’s and the Visconti referred to in his song You Have Killed Me is the Italian director rather than the American record producer – but you probably knew that already.

The film opens with a recently widowed mother and four of her sons arriving on a train from a poverty stricken part of southern Italy to industrialized Milan where they are instantly dazzled by the bright lights of the big city.

The idea is that oldest son Vincenzo (Spiros Focas), who has already settled there, will take them in but that plan quickly goes awry and the Parondi family are instead forced to find lodgings in a cramped and filthy apartment, although Vincenzo soon discovers a housing loophole that many fellow southerners have taken advantage of – find a place to stay then stop paying rent after a few months to deliberately become evicted meaning the local authorities become duty bound to provide council accommodation which if you were homeless in the first place you would not be entitled to.

Before they are allocated somewhere new to live though, the family meet a beautiful neighbour called Nadia, a femme fatale who casts her spell on the boys, particularly Simone (Renato Salvatori).

The story is divided into five chapters, each supposedly devoted to one brother in particular but really, at the heart of the film is the love triangle that develops between Nadia and the second and third brothers, Simone and Rocco (Alain Delon). 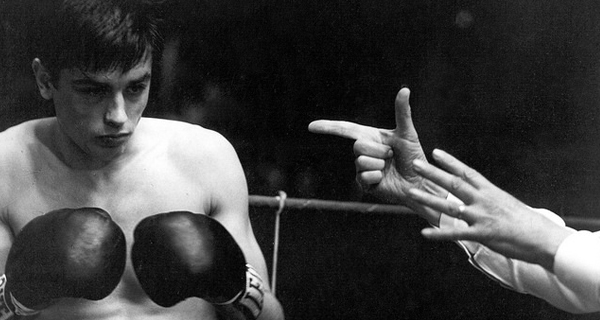 Simone shows some promise in the boxing ring although he refuses to listen to his trainer and lacks self-discipline. Later Rocco catches the eye of a local boxing promoter when sparring with his brother but before then, he is drafted into the military. While serving his national service he meets up again with Nadia, by now the ex-girlfriend of Simone, their split accelerating his journey down the path to self-destruction. Rocco and Nadia secretly embark on a relationship, which will have serious consequences not only for them but for Rocco’s entire family.

Of course, Simone eventually finds out what is going on between them and what follows remains one of the most disturbing ever scenes in a mainstream cinema release. Together with a bunch of his waster buddies, Simone seeks out the pair and with his friends holding down Rocco, his younger brother is forced to watch him rape Nadia. ‘You want to know how she is, your Nadia?’ he screams. ‘I’ll show you how to make love!’

In a vertigo inducing scene atop Milan Cathedral, Rocco’s response to the rape of Nadia is unexpected in the extreme. He may despise Simone for his shameful actions but he also believes in the power of redemption – shades of Charlie and Johnny Boy in Mean Streets here – and puts his family loyalty before the woman he loves by encouraging Nadia to go back to Simone, to help him become the person he once was – a sacrifice that may strike some as saintly but spectacularly wrong in my moral universe.

Conservative critics attacked the film and after being screened at the Venice Film Festival (where it won the FIPRESCI Prize and the Special Prize), the censor demanded cuts in the rape sequence and another scene near the end of the film that I won’t give away.

Both are fully reinstated in this new restoration of the film, which looks fantastic, the velvety textures being perfect for the gym and smoky boxing arena sequences. This is the very first time that this version has become available on Blu-ray.

Claudia Cardinale, who plays Ginetta, Vencenzo’s fiancée, notes in one of this film’s many extras that the ’60s were a magical time for Italian cinema and few cinephiles would disagree with this statement. In 1960 alone, Michelangelo Antonioni’s L’avventura and Federico Fellini’s La Dolce Vita were released, and Rocco and his Brothers is right up there with those two classics.