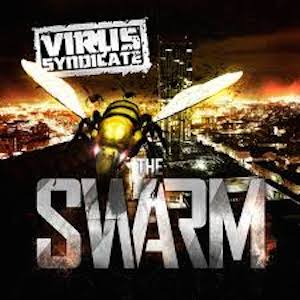 Hip-Hop in its purest form – stripped-down, boom bap beats with razor sharp delivery and poignant lyrics – seems to have taken a backseat in the UK in favour of its grime and dubstep dimensions. I don’t understand how the popularity of the subgenres has grown exponentially, but I do find it frustrating that only a handful of artists are unapologetically and uncompromisingly committed to making Hip-Hop, without any of the experimental baggage.

Manchester based collective Virus Syndicate dabbles in Hip-Hop, but the alternative basslines and fast rapping resemble the styles influenced by garage, ragga and drum and bass. To simplify: The music has more in common with Dizzie Rascal and Roll Deep than it is does with the likes of Hip-Hop purists Jehst, Klashnekoff and Life MC.

Not that I’m going to argue with Virus Syndicate, having developed a reputation for being one of the finest groups in the UK’s urban scene: JSD, Goldfinger, Nika D and DJ/producer MRK1 have been committed to what they do best for over thirteen years now and play to their strengths. They’re confident in rapping about partying, girls, money and sex, aiming to get the club heads moving and having a good time at the weekend.

The music’s not for me, though. For all the hype and energy Virus Syndicate expresses via its sound, the enjoyability is lost using various vocal dub effects and sub basslines. It’s the sort of music that I feel like I need to be drunk/high to tolerate  … even then I’d probably think there’s too much going on for me to give a damn about.

Take Dragonfire, a track laden with so many different sound effects it’s difficult to pin down what is actually going on. The sunglasser kids in their white vests will probably argue that the unpredictability is what makes the music sick and trippy but, for me, the music doesn’t seem to be really going anywhere. The reason I like Hip-Hop so much is that it takes elements of funk, rock, r ‘n’ b, blues and reggae, but remains free from all of those genres, standing on its own.

The lyrics on The Swarm are not exactly brilliant, either. Bars such as

If she ain’t comin’ back to mine

I’m a leave with her friend.”

will play right into the hands (and heads) of VS’s target audience; and on Sick Wid It there seems to be a desire to throw any old words together for the sake of musical accompaniment (Knick-knack paddy-whack/ Nah you can have it back”). Just so anyone other than Virus Syndicate’s fans doesn’t know: We’re not talking poetic greatness here.

The best tracks for me are Who’s That and Simmer Down: The first of which works well as standard, hard-hitting battle-rap; while the latter has a rather catchy hook referencing tensions in a relationship. The Swarm is not worth bragging about on the whole, though. I remain unsold on this fusion of grime/dubstep that comes with Hip-Hop: Too much obsessing with style and not enough substance – it all seems a bit of a mess.

Change isn’t detrimental to the authenticity of the Hip-Hop genre, so I’ll try to keep an open mind. But, for now, I’ll be looking elsewhere for my music fix.

Virus Syndicate’s music can be found here HERE. The group is also on Facebook HERE & tweet at virus_syndicate