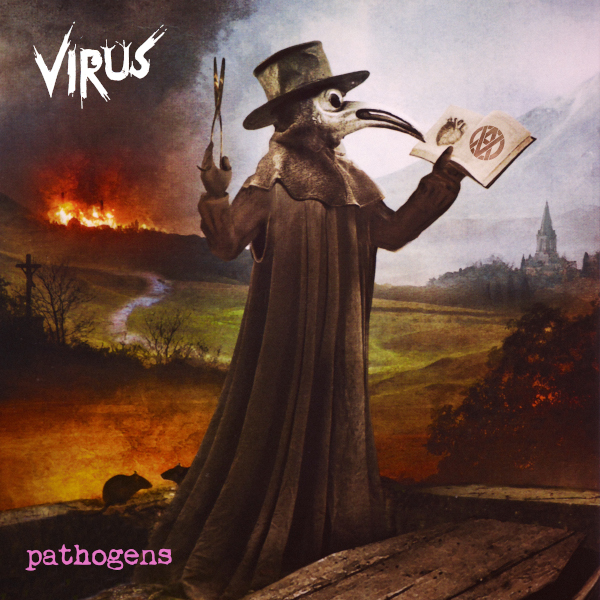 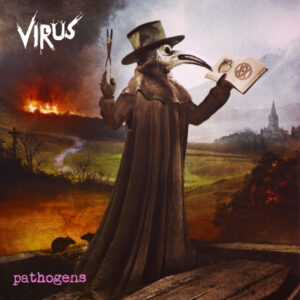 Virus – Pathogens (Grow Your Own)

Nathan Brown says that the new 10 inch by anarcho-punks Virus is their best release by far, injected with a touch of surf and ska and a heavy dose of cynicism about the poisoned landscape they survey.

Virus (not the New York HC band) had been about in the mid ’80s, played around the West Country a bit but then petered out in 1986. 20 years later they reappeared, initially picking up where they had left off. Following a number of line up changes in recent years they have built a strong team who can write together, creating a new sound without losing the Virus identity. This 10 inch, part of a series that DIY punk label Grow Your Own is unleashing on the world, is definitely their finest release by far.

The cover image depicts a medieval plague doctor against an apocalyptic landscape and is a mix of classical high art and digital editing. The artwork and layout is high quality and top notch. Given that Jaz is a graphic designer for a day job it would have to be!

The Pathogens of the title that the plague doctor can see polluting Virus’ landscape are many. The Nasty party’s austerity, the Frequencies emitted from smart meters, the Hack which steals your identity and of course the Fat Cats overseeing “a system set up with corruption and lies…to bleed you dry”, which keeps us in a Human Cell. All fairly typical territory for an anarcho-punk band. Still here and still angry.

I agree wholeheartedly when Virus sing on Frequencies, “If you’re smart you’ll say no to any system that controls you”. However, I don’t see Smart Meters as sinister as the lyric implies. I get the kneejerk response to devices monitoring our activity. But my understanding is that if we want to act on climate change by reducing waste energy generation, and more importantly move away from the big 6 capitalist monopolies controlling our energy, using more community renewables, smart metering is part of the solution. That said, those Alexa type listening devices are definitely banned from my house!

Virus also touch on personal relationships in the song Splintered , ironic given the departure of lyricist Dave under something of a cloud since this was recorded.

The songs Pretence and Duplicate hold up a mirror to the punk scene. In particular Duplicate speaks of old punk bands reforming solely to play at festivals like Rebellion and chase the money. Jaz from the band was at great pains to point out that it’s not having a go at bands who play Rebellion or the festival itself, especially given that GYO label ‘bosses’ Anthrax and Hagar The Womb have played there a few times! This song is more a display of disappointment at those doing it for the money not the love.

On first listen I was genuinely astounded by how good this sounds. Well recorded with clean but powerful production – the sort of sound that in the 80s was well out of reach of all but bands who had a huge budget behind them. Something that is easy to forget in the modern epoch of high quality low cost digital equipment. There are a few gimmicks thrown in but they are subtle and in the right places so they don’t sound cheesey.

It sounds like Virus…but better. It’s not all about the brightness of the production though. There is a complexity in the song writing that wasn’t so evident in the past. A taster video of the album gives an indication of what to expect

Dave’s sing-song, occasionally off kilter, vocals have a strength and depth in them that wasn’t there in previous offerings. This is one of the most obvious improvements. It’s a shame this is his last release with the band, having left since the recording session. Only bass player Jaz remains from the old line up. This explains why Dave is missing from the band photo on the reverse. But at least he has gone out on a high. This record is a legacy to be proud of.

There are several moments where Dave’s vocal delivery sounds remarkably like Big Al of the high priests of 80s West Country psycho punk rock, Cult Maniax. This comparison is only accentuated by the coincidence of phased guitar effects just as I’m trying to shake that thought. Oddly enough, I referenced a song by aforementioned Cult Maniax in another recent review, and back in 2015 I made this same comparison when reviewing the Virus single Illuminati.

Sam’s drums are clipped and precise throughout, but driving at the same time, more than capable of dropping into an off-beat where required. The guitar playing is ambitious and varied, throwing up surf style leads, soaring breaks, arpeggio and jaunty ska style up-strokes. Occasionally it returns to a more traditional 80s distorted punk sound but it is the deviation from the punk norm that is Tom’s strength. The bass is springy with a growl and plenty of fluidity.

There is something of the Damned in tracks like Fat Cats. In particular, the solo at the end of Hack sounds a bit like Sensible at work. This makes perfect sense as bassman Jaz will happily admit that he is a lover of Paul Gray’s work. However, the association which keeps popping into my head with regard to the music is Subhumans. This is a major compliment as Subhumans have always been one of the more interesting punk bands and ooze talent. The track Splintered could have come straight off the Subhumans 1983 album Cradle To The Grave.

Human Cell closes the record and will appeal to fans of Death Rock. Minor keys abound and there is touch of Rudimentary Peni here and there. The disconcerting middle 8 makes for chilling listening. A floaty fairground keyboard haunts a downbeat skank – not quite reggae, more in the vein of the Cardiacs. The closing refrain of “Living in this Human Cell, living in this Human Hell” is a sinister and fitting way to top off a collection of songs that paint a picture of a poisoned landscape.

The 8 tracks clock in at 20 minutes. The record comes on blood pus and bile vinyl (okay, technically it’s yellow and red on transparent but gimme a bit of poetic licence). Kinda fitting for a disease themed record. The CD version features nine additional tracks, taken from the last four Virus singles.

As a disclaimer I should declare that my own band Armoured Flu Unit (reviewed here) released a 10 inch on the same label on the same day, and I’ve known the Virus lads for a long time.  I have not hobbled them to boost sales of our own record(!). Nor have I inflated my positive view of the Virus release to please the record label.  You’ll have to trust me on this one, but you can always listen on bandcamp and make your own mind up!

Order the record, CD or download from the Grow Your Own records bandcamp site.

Words by Nathan Brown. More can be found over at his Louder Than War Author Archive.