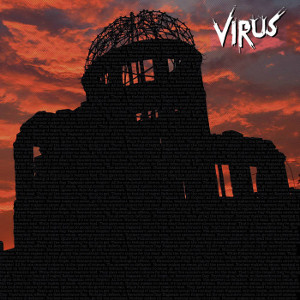 Virus take on extremists and the nuclear legacy on this latest release from Grow Your Own. Nathan Brown reviews.

Grow Your Own is one of the more interesting labels in the DIY punk scene at the moment.  Although the majority of the bands they carry started out in the 1980s and fall into the “anarcho” sub genre of punk (i.e. they have anarchist or protest lyrics knitted into their DNA and purpose), it’s the attention to the package as a physical artefact that makes them stand apart. Full colour art rather than monochrome, large posters, 3D inserts: you name it, they have played with it. Oh, and coloured vinyl of course.

For this single, Virus bag themselves transparent blue vinyl and full colour photo cover + insert featuring the iconic ruin of a domed building at Hiroshima against a blood red sky. On closer inspection, the lyrics to the songs are overlaid in grey on the building.

One Minute Silence is almost like three songs melded into one (by the nuclear flash perhaps?) although it doesn’t sound like a cut and shut – just well crafted and complex. While it does not sound anything like them, the opening riff borrows heavily from Icons Of Filth. By the middle section, singer Dave’s vocal takes on a demonic pitch intoning “Nagasaki Never Forget” sounding very much like Nick Blinko of Rudimentary Peni before a heavy chuggy riff with a Hawkwind-esque guitar solo floating over the top. In this third section, the vocals take on something of a Lydon quality (something I have remarked on before) with a bit of Stig Icons of Filth thrown in for good measure, intoning “Nuclear makes no sense”. Finishing the song with a gong and geiger counter at the end of the song was a great move and make this the stronger of the two offerings.

Okay, the A-bomb is not exactly ground breaking material for a song – especially from a punk band –  and Virus have touched on the nuclear threat before, but it doesn’t make it any less relevant – the current pursuit of Trident and nuclear power in this country and all the international nuclear activity is testament to the danger we still face.  And it’s more interesting than hearing about someone’s love life.

The double A-side “Infidel” starts with a bit of atmospheric, (gothic?) Killing Joke style picking on the guitar with driving rhythm section before opening out into a strumming twang a la Buzzcocks circa “Ever Fallen In Love…”. The lyrics are open to interpretation. “I’ve seen you losing your grip on reality on a way trip into insanity” could equally apply to somebody who has been radicalised online and refers to others as infidels, or to one of the far right gangs who label themselves “infidels”. Both sides of the same coin if you ask me! As with the other side of the single, towards the end of this song we get some neat guitar work and a bit of Lydon-style vocalising.

Both tracks clock in at 3.19, which is 199 seconds. I don’t know if that was intentional or coincidence and what the significance is, but I like stuff like that!

Get the limited edition vinyl or download from the Grow Your Own bandcamp site.