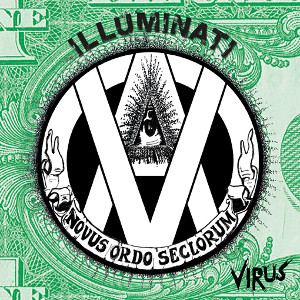 West country punks Virus conjure up Killing Joke, Subhumans & The Mob in their latest offering, or so says Nathan Brown.

If Aleister Crowley was supposed to have conjured up the British Empire then perhaps on this occult themed single, Virus are attempting to conjure up their peers and predecessors from the mighty West Country punk rock stable.  The first sacrificial offering, “Illuminati”, begins with a picked guitar intro before building into a very catchy tune.  So catchy that last night I woke up with it looping as a perpetual earworm. The guitar is at times minor and dark (befitting its conspiratorial subject matter) and has something of Zygote or later period Amebix about it, at other times chopppy, straight down the line punk. There’s proper bass lines in this song too, for some reason bringing to mind the Buzzcocks but to a much greater degree Subhumans, and I think that’s where the catchiness comes from.  Virus’ vocal delivery is part sing-song, part poetry, slightly dirgey and while singer Dave is recognisable in his own right, is also reminiscent of 80s West Country punks Cult Maniax and Steve Lake from Zounds.  As my partner wandered past she commented that she thought it sounded a bit like The Mob. Now it’s been said I can see where she’s coming from.  This ain’t noisy, shouty, guttural screaming but there’s anger, annoyance and a dose of good old fashioned 2 fingers in  the air vitriol to be found.  I almost expect the first line to start “You’re only twenty nine….”.  My only complaint is that it seems over too soon, but it’s an inditement of the quality of the song not it’s length – at 3:20 it’s just about right.  The only solution is to play it again. 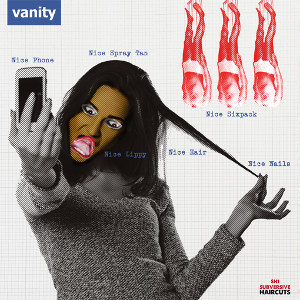 Anyway, onto the double A side….The guitar sound and tribal drumming at the start of “Vanity” took me zooming back in time to Killing Joke‘s “Empire Song”.  And the more I listen to it the more difficult it has been to shake that feeling – they say first impressions last!  Attacking the “Facebook generation” (later in the song transforming into the “faceless generation”) it could almost sound like sour grapes from  the “Blank generation” but this is a valid insightful critique of an ego driven self and selfie obsessed society that we find ourselves living in.  The artwork for this side of the record (right) conveys the overall message pretty well.  “Fucked up egos know nothing of reality” intones the final chorus and the song shudders to a halt like a steam train with harmonics ringing out like steel on rails.

This is the first vinyl release on punk label Subversive Haircuts, which was the label Virus used to release tapes 30 years ago.  The limited run of 300 of these 7 inches is served up in marbled green (every one being different don’t ya know?) with a further 100 available in the US from Loud Punk Records in which case it comes in piss yellow.  If I didn’t have it already I’d buy it.  I’m told to expect further offerings from the likes of 51st State, Liberty & Radioactive Bones.

~
To order your copy for £5 including P&P (UK) email virus838606@yahoo.co.uk or in the US contact Loud Punk Records

Words by Nathan Brown. More of his writing for Louder Than War can be found in his author’s archive.