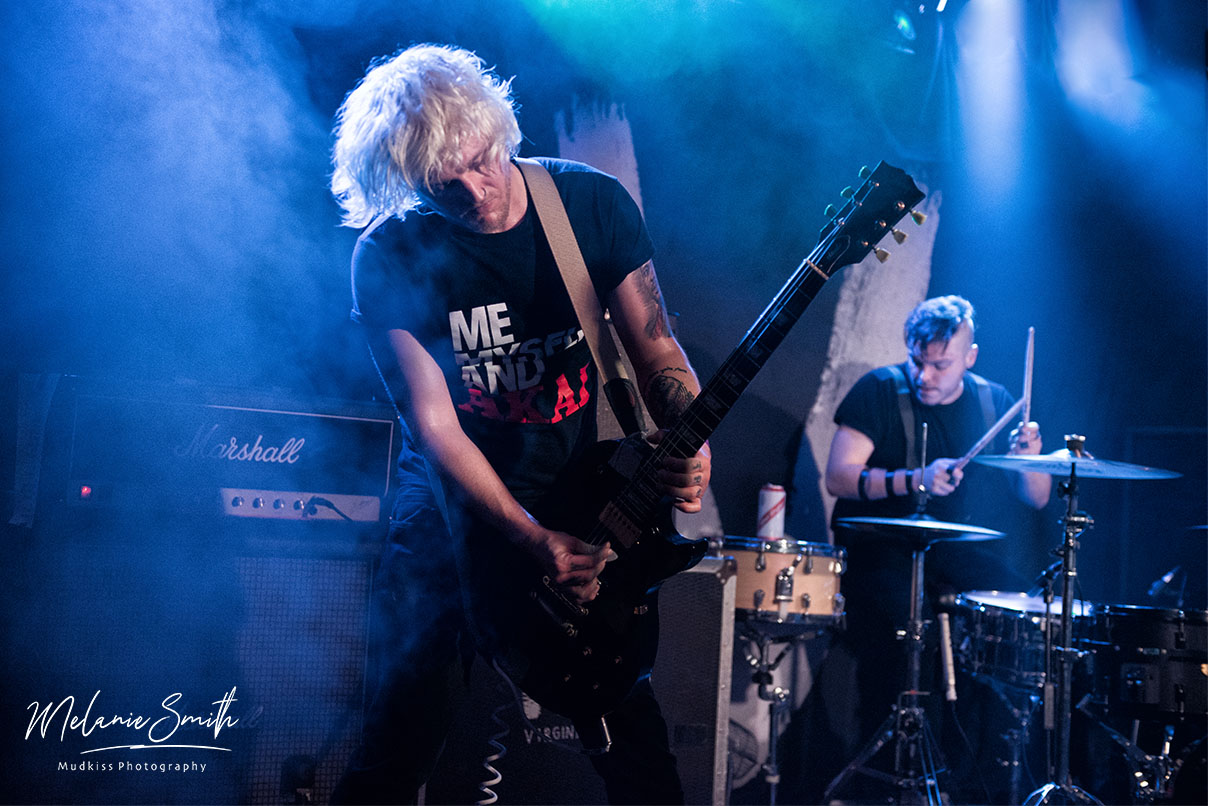 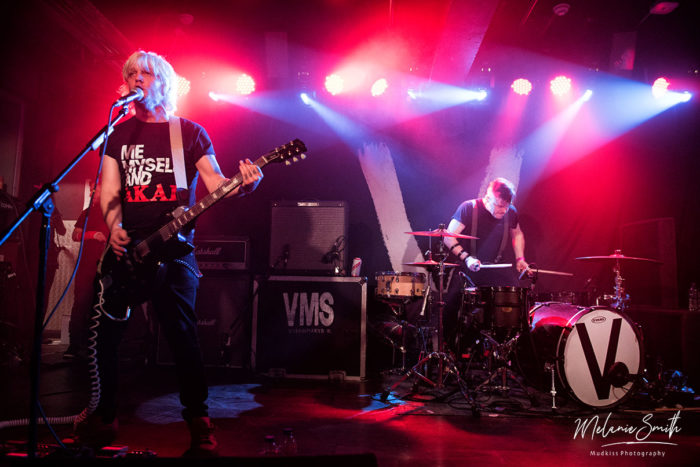 Virginmarys play an incendiary set to an ecstatic audience, with strong support from Hands Off Gretel and Rook and the Ravens. Cazz Blase feels the love, with photos by Melanie Smith

Opening band Rook and the Ravens are local boys and, having started around the same time as Virginmarys, have gigged with the band a lot apparently. It’s perhaps for this reason that they strike such a relaxed and confident tone throughout their set: They know who’s fans they are playing to, and as such what to expect. While both Virginmarys and Hands Off Gretel opt for a fast, hard and intense sound, there’s something a bit more loose and 70s AOR about Rook and the Ravens. They feel quite classic rock. It’s a broad church after all.

South Yorkshire’s Hands Off Gretel take to the stage not long after and immediately take things in a grrrl powered garage rock direction. As comfortable playing Download as Loud Women Fest and Rebellion, here are a band who represent a happy collision between grunge, garage rock, punk and riot grrrl. 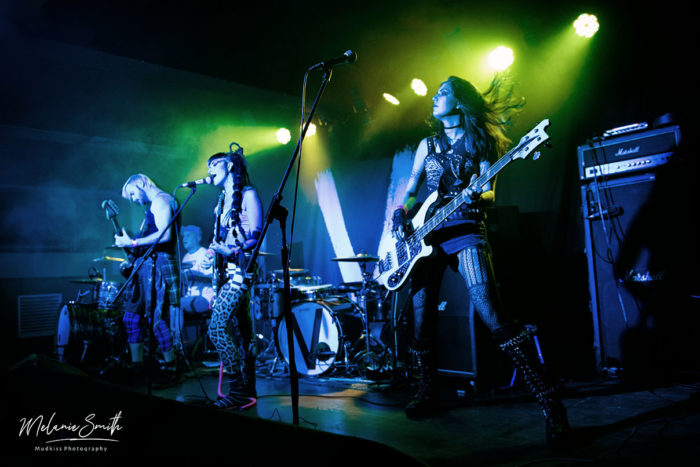 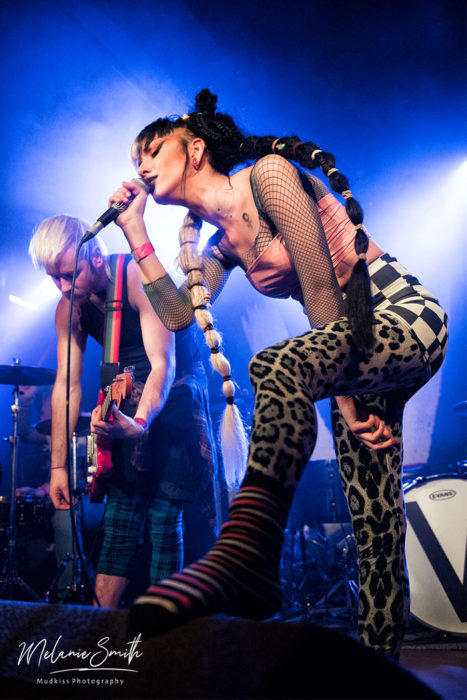 Singer Lauren Tate gleefully bounces about the stage, confident and ferocious in her delivery, her black and white hair tamed into long bunches. It’s a striking look: Part Ladies and Gentlemen, The Fabulous Stains!, part Cruella De Ville. She’s a commanding frontwoman, backed by a very tight band comprised of Becky Baldwin on bass and backing vocals, Sean Bon on guitar and Sam Hobbins on the drums. Not only do they sonically gel but they also look like a unified band.

In the main, Hands Off Gretel’s sound is urgent metal tinged punk pop, making them more like a sibling to Skating Polly than the heirs of Iron Maiden. The songs are very fast and hectic, a bit giddy sounding, with big hooks, swagger and attitude. Recent singles ‘SASS’ and ‘Kiss Me Girl’ stand out, the latter being followed by a brave and spirited take on the Stooges classic ‘I Wanna Be Your Dog’. The audience are interested and inclined to be warm towards the band. There’s a lot of people watching.

But by the time Macclesfield’s Virginmarys take to the stage it’s obvious that they are who the crowd are really here for. The venue is full and the audience are in a boisterous mood. Here are a band who are truly loved.

The silk men have just released their fourth album, Northern Sun Sessions, a tight set of rock anthems that the crowd have clearly heard and taken to their hearts. A few weeks on from the release and sections of the crowd are already singing along to songs such as ‘Look out for my brother’ and ‘Eye For An Eye’. When it comes to older songs such as ‘Bang Bang Bang’, most of the crowd are word perfect. They are singing at the top of their voices, pogoing and moshing like mad. The band are pleased and, as the set continues, they grin from ear to ear and are clearly very touched by the devotion of the fanbase. 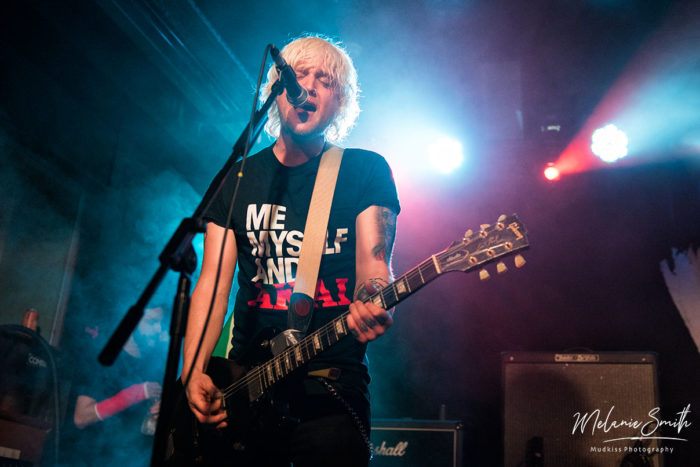 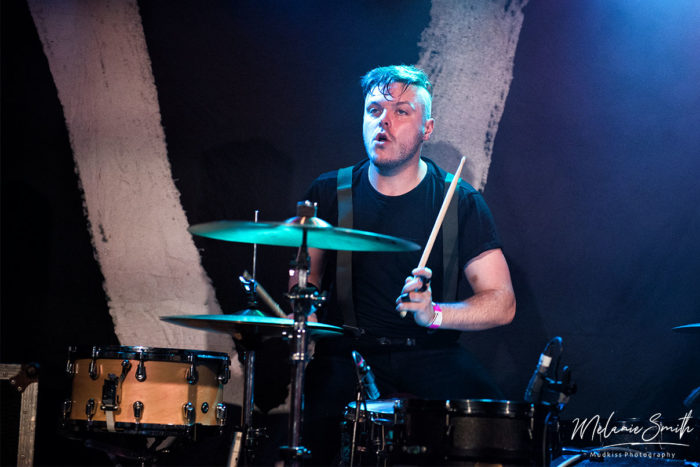 Sonically their sound is reminiscent of a band such as Therapy? in the sense that they have a similar ferocity and intensity to their music while also sharing the tendency to transcend categories. They write fast, driving, intense rock music that is sophisticated and varied, but to the point: No self indulgent guitar solos here thank you.

They are ten years into their career, and Northern Sun Sessions has been crowdfunded. It includes the Manchester worker bee as part of it’s design. Not just as an act of solidarity with Manchester, but also in the truest sense of the spirit of the worker bee and it’s history in Manchester: As they put it, they really did work like fuck to get the album out. The graft appears to have paid off, not just in the numbers and passion of the audience, but also because the band seem happy and comfortable in their own skin at the moment. DIY is hard work, as many an artist will testify, but it clearly has it’s rewards.

The crowd show no signs of flagging and the band are called back for an encore. Still slightly overwhelmed by the passion of the crowd, they take pictures of the audience at the end of the encores, despite having stated earlier that they really aren’t the kind of band who do that. It’s a special night after all, and you have to mark such occasions.

All words by Cazz Blase a freelance writer from Stockport. You can find her on Twitter