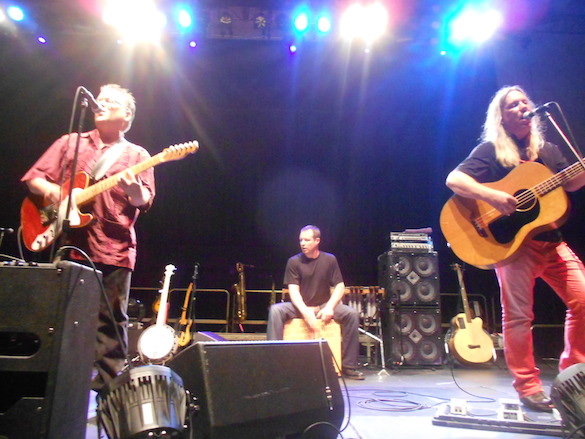 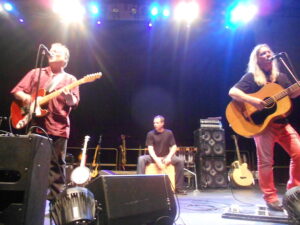 It has been thirty years since the Violent Femmes released their eponymous first album. To celebrate they performed the tracks at the stunning Art Deco venue that is the Troxy in London.

The distinctive opening chords to Blister In The Sun are the perfect tonic for the devotees who have been doing just that –  meeting, greeting and drinking in the  warm sunshine before the show.

The Violent Femmes have managed what many bands set out to do – they created a genuine unique sound that is instantly recognizable.  From the bare drum beat perfectly timed to Brian Ritchie gorgeous, deep rich-toned acoustic bass and singer guitarist Gordon Gano’s individual vocals.  They are also joined on stage by Stooges sax player Steve Mackay, The Horns of Dilemma and guest guitarist, long-term Nick Cave collaborator, Mick Harvey.

The songs are fresh and infectious.  Boom – you are transported back to the moment when they were first heard them.  A quick glance around the room and guess that most people were at college or starting their first job.  Although recorded in 1983 the tales from ‘Add it Up’ ‘Kiss Off ‘, ‘Confessions’ still resonate now.

This Milwaukee trio formed in 1981 as an acoustic punk band playing on the streets.  Their break came when they played outside a Pretenders gig, Chrissie Hynde asked them to open the show and their rise to cult status began.

At times, Gano swaps his guitar for a banjo, creating some tender and delicate notes as they effortlessly glide into more folky Jesus Walking On The Water.  This gives the audience a chance to catch their breath after the break neck frenzy of, Gone Daddy Gone. The electric guitar returns to the stage for, Gimme the Car and the drummers are let loose. It is a blur of sticks and brushes as they used the stage and sides of the base bins to craft a chaotic sound.

They close their set again with Blister, the Violent Femmes having succeeded where some heritage acts are not so lucky.  Their classic material has stood the test of time – they are polished, perfectly uplifting and entertaining.  The crowd scrabble to get autographs and pictures.  One happy punter thinks he has grabbed the set list – only to discover it is the bands lunch orders. Turns out they just call the tracks as they perform them.  Way cool and way fun.  To quote the band, “People worry, what are they worrying about today?”   Absolutely nothing with bands like the Femmes still showing us how it is done!