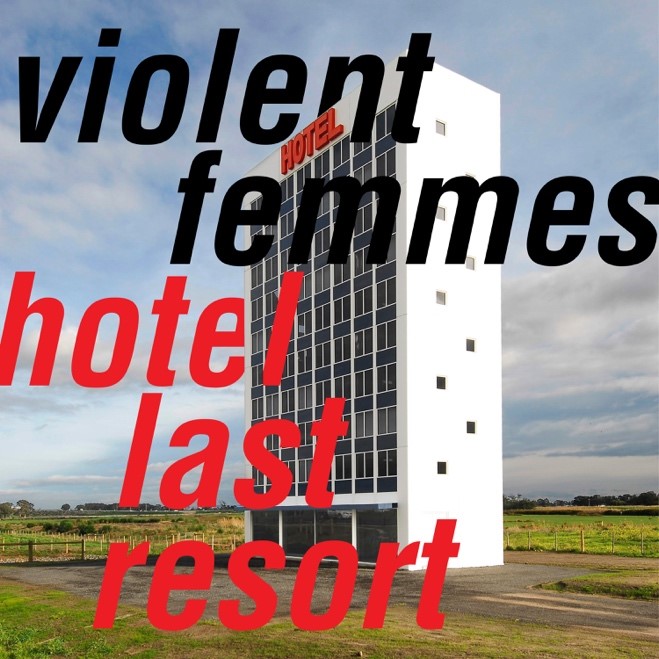 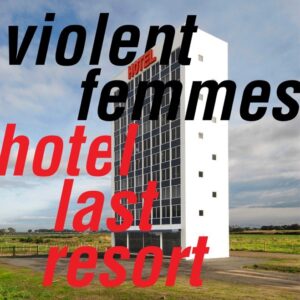 If The Violent Femmes’ tenth release is a last resort, it’s a damn fine one.

Back in 1983 the Violent Femmes produced one of the era defining albums with their eponymously titled debut album that was a slow burner as it picked up airplay on the influential college radio. It was American Underground music played with acoustics and brass and fronted by a nerdier version of Lou Reed, with soon to be classics such as Gone Daddy Gone and Blister In The Sun. Fast forward 36 years and the Femmes are all set to release their tenth studio album, Hotel Last Resort. Victor DeLorenzo the stand-up drummer and founding member may have departed in 2013, but Gordon Gano remains as literate and quirky as ever and Brian Ritchie still has his classic bass sound, that’s like metal producing a raw beauty that twangs and grinds as though every note is wrought with heart and power (he’s one of the greatest bass players ever in my book). And here they are joined by percussionist John Sparrow and multi-instrumentalist Blaise Garza (whose massive contrabass saxophone adds deep gravitas to the songs it’s used on), and guest spots from Tom Verlaine and pro-skateboarder Stefan Janoski.

What the Femmes have produced here is probably their finest work since 1984’s Hallowed Ground. It has the tropes of a classic Femmes’ albums; the Americana of post punk, folk, blues, jazz, spiritual, gospel, classic rock ‘n’ roll with left field lyrics and avant-garde structures that never detract from a bloody good tune. These are deceptively straightforward, to the point songs, that give up more of themselves on repeated playing.

The album opens with Another Chorus, a dark humoured number that pleads with bands not to repeat chorus after chorus. It’s an opening song that is simple and funny and draws us in to some darker material that will come later. I Get What I Want has a golden era rock ‘n’ roll sound to it, but with a more evil voodoo edge to it as the singer reveals himself as a serial bully and victimiser. The song I’m Nothing was originally released on 1994’s New Times and is now re-recorded with big Femmes fan pro-skater Stefan Janoski. It’s a heavier, bigger version this time round, wilst the lyrics, about not wanting to be straitjacketed by left wing or right wing bullshit, are even more relevant.

Everlasting You is a simple, beautiful love song, whilst I’m Not Gonna Cry is a wonderful, melancholy cover of the Greek rock superstars Pyx Lax song. This Free Ride is a folk song with Gano’s word play slotting together beautifully like falling Tetris blocks.

On the ballad like Paris To Sleep we get a clever twist on the reasons why people go to the city of lights, which turns into a bit of a scat with gospel thrown in at the end. It’s the sort of song that the Femmes seem to throw off effortlessly but which will have the listener recalling, and wanting to listen to again, for weeks afterwards. The album closer is the Femmes’ take on Irving Berlin’s God Bless America. Whilst it remains true to the original’s American spirit it adds a poignancy of tribal drums and folk music that conjures up a Native American landscape, the prairies, open spaces and freedom, before it was exploited (or developed, depending upon your politics) by the white man.

The centrepiece of the album is the title track, Hotel Last Resort, which has a guest spot from Tom Verlaine. It’s a deeply cool rock beat, imbued with too many late-night drinks. It’s a hotel of chancers and dancers, dashed hopes and slivers of dreams that are pushed under doors like notes from similarly lost neighbours and over it all Verlaine’s distinctive and plaintive guitar playing haunts the song like  a murdered bell boy wandering the corridors searching for tips from guests who have long given up hope. As Gano sings: I don’t change the chords anymore, the chords change by themselves.

Welcome to songs from the Hotel Last Resort. Enjoy your stay.